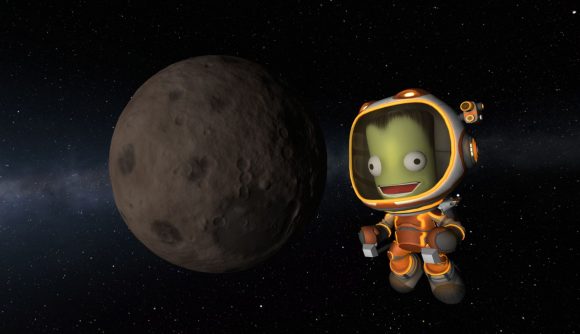 Kerbal Space Program fans have often wondered why the doesn’t do n-body physics simulation, where the gravitational forces of masses in space are all calculated simultaneously. Like its predecessor, Kerbal Space Program 2 will make use of a simplified physics system where planets just generate a static sphere of gravity. Otherwise, the developers say, the solar system might explode.

“If you take the Kerbal system from the original game, and you apply n-body physics to that, the solar system disassembles and starts to fire moons at planets,” creative director Nate Simpson says (via Edge magazine #337). “In general, I think that’s where we come up against this game being a game.”

Interesting natural phenomena like Lagrange points – a sort of pocket between gravitational forces where you can essentially ‘park’ a space vessel – can come about with an n-body simulation, Simpson says, “but you also sacrifice a lot of predictability.” And a lack of predictability can make a closed game system fall apart.

“A real n-body system will evolve over time, and it might have dire consequences for your save game, if you’re playing over thousands of years and building up an interstellar civilisation.”

There is Kerbal sex in the sequel, though, so that’s at least one accurate simulation of physical bodies in motion. (A sort of ‘in-body physics,’ if you will.) Surely there’ll be no unintended consequences there.