How does one improve on Ridley Scott’s legendary cinematic world-building? Clearly, by stripping away all the bloat from his latest directorial turn – you know, the actors, dialogue, sets, visual effects, characterisation and plot – and concentrating on the space-faring craft at the heart of the movie. So it is with this contest, hosted on the Kerbal Space Program subreddit, which challenges Kerbalnauts to retell the story through the medium of screenshots.

Kerbal Space Program is one of our best PC simulation games, as one might expect. World keeps on turnin’.

The competition began last week on /r/KerbalSpaceProgram, tasking players with recreating The Martian’s story in KSP. Although many started out, only six people successfully built, navigated and screenshotted through the entire plot. They’re all wonderful, in this writer’s humble opinion, and light years ahead of the poorly assembled genitalia I regularly launch *almost* into orbit.

You can check out all the screenshot galleries via the link above. Though you won’t get a complete overview of the novel or movie by perusing the KSP recreations, those galleries and their annotations do contain what some might consider spoilers. I’ll thus refrain from going into any great detail, and simply say I can’t even imagine the work and skill that goes into something like this: 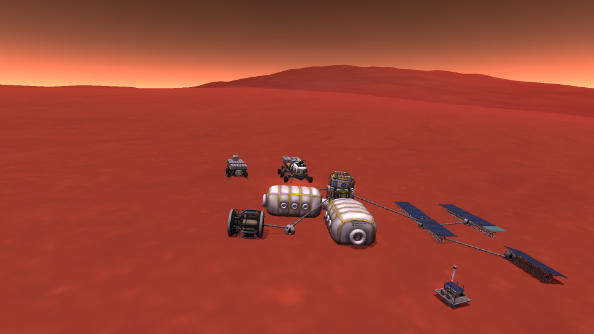 Even reaching Mars, let alone getting that array set up on its surface, is worthy of plaudits. Competition initiator Redbiertje seconds that sentiment: “Some of [the entries] literally gave me goosebumps while reading them.”

You can vote on the winner now, who will eventually be awarded the title of ‘Mark Watney.’