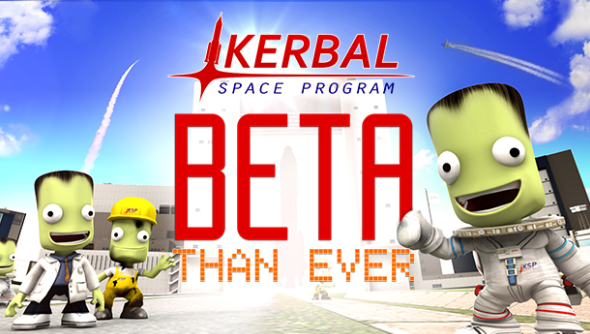 It’s been floating in alpha for what seems forever, but Kerbal Space Program has today finally locked docking clamps with the next phase of its mission: beta. And with that version 0.90.0 is launched, and it comes with rocket smoke-trail long list of updated features and fixes.

“Building upon a long term project that was introduced with the last update’s destructible facilities,” wrote SQUAD in a new blog post. “players will now have the ability to start from the ground up with a basic space center and turn it into a sprawling compound in the new upgradable facilities feature. It’s not just buildings, either. Players will unlock new capabilities and bonuses as their career path progresses.”

The update brings 170 different changes to the game, all of which you can view in the changelog on page 2. The most interesting of the additions though the the RPG-like progression path for Kerbals. With each mission they now gain XP, which contributes to their overall skill level. Kerbals are split into classes – pilot, scientist, and engineer – which make choosing the right ones vital when hiring new staff, and developing them a long-term goal. The more advanced your team, the better the chances of success.

* Gizmo coordinate system can be toggled between Absolute and Local with the [F] key.

* Rotation and Offset gizmos can also snap to angles and to a 3D grid.

* Gizmo snap can be toggled to constrain to an absolute grid or a local one depending on coordinate frame.

* WSADQE keys still work to rotate in 90° or 5° (Shift) increments, and are now more consistent with pitch, yaw and roll rotations.

* Added ‘By Resource’ Part Filter: Lists parts based on resources they contain/use

* Added ‘By Manufacturer’ Filter: Lists parts based on their manufacturers

* Added ‘By Module’ Filter: Lists parts based on the modules (functionalities) they implement.

* Added ‘By Tech Level’ Filter: Lists parts based on their corresponding Tier on the Tech Tree.

* Custom Filters (and subcategories) can also be created and edited for user-made collections of parts.

* The Parts list can now be sorted based on several criteria (to organize displayed parts after filtering).

* Subassemblies can also be sorted and arranged into custom categories.

* The VAB and SPH are now based on a single scene.

* Editor Logic fully overhauled and rewritten using the very reliable KerbalFSM framework used for character animation and many other systems in the game.

* All Craft files can now be cross-loaded in the VAB and SPH.

* All KSC Facilities can now be upgraded through levels (currently 3 levels implemented for all facilities).

* Added new models for KSC facilities at each level.

* KSC Facilities now start at level 1 (in Career Mode), and can be upgraded to top level separately.

– Unlock EVAs off of Kerbin’s surface.

* All KSC Facilities in all levels are destructible (except level 1 runway and level 1 launchpad, which are indestructible).

* Expanded Context Menu for KSC Facilities, to allow upgrading and viewing the current (and next) level stats.

* Hovering over the Upgrade button on the Facility Context Menu will display stats for the next level.

* The Flag Pole in front of the Astronaut Complex will change levels based on the average level of all KSC Structures.

* The KSC as seen from the editor facilities will change to reflect current level and destruction state of visible facilities outside.

* Struts and Fuel Lines now use a common base system called CompoundPart.

* New CompoundPartModule base class added to provide functionality for parts based on CompoundPart.

* Added CModuleStrut, creates a physical Joint between both ends of a CompoundPart

* Added CModuleFuelLine, creates a fuel re-routing between both ends of a CompoundPart.

* Part-to-Part Resource Transfer now possible between more than 2 parts. (In/Out options will push/pull from all other selected parts evenly)

* Kerbals now have Skills they can develop.

* Kerbal Experience is needed to level up crew skills.

* Added Pilot Skill. Pilots provide SAS features at various levels. Basic SAS is available as long as at least one pilot is aboard.

* Crews in the Astronaut Complex can now be Sacked (if available) or given up for dead (if missing).

* SAS is no longer available in any vessel for free. A pilot or an operational SAS-cabable probe core are needed for SAS to be available.

* Overhauled the existing ModuleSAS part module so it acts as a SAS provider in any level.

* Removed ModuleSAS from all parts except probe cores.

* Tweaked the R&D tech tree progression for all probe cores.

* Tweaked costs and descriptions for all probe cores.

* Probe cores set up with progressing levels of SAS service.

* Added survey contracts at specified locations on the map.

* Existing and new contracts revised to be configurable.

* Over a hundred new biomes available in total.

* Added new Edge Highlight visual effect when hovering over part icons on the staging UI, or when selecting a new root part or choosing a part to transfer crew to.

* Added new Tooltips for several UI controls in the Editor, R&D, Flight and many other areas.

* Craft Stats app icon will turn orange if any limit is exceeded for the current editor facility level.

* Added new sound fx for gizmos and re-root in editors.

* Revised VAB and SPH camera behaviour so they stay within scenery bounds as best they can.

* Overhauled time-of-day system for KSC emissive textures. All facilities light up at night. (except ones without lights, like lvl1 runway)

* Fixed several issues with Undo/Redo (ctrl+Z, ctrl+Y) in the editors.

* Tweaked sideslip factor in landing gear (was much too strong).

* Re-saved all stock craft so they are fully compatible with this version.

* Existing craft files from previous versions will require re-saving in the editor before they are allowed to launch in Career Mode, to calculate size data.