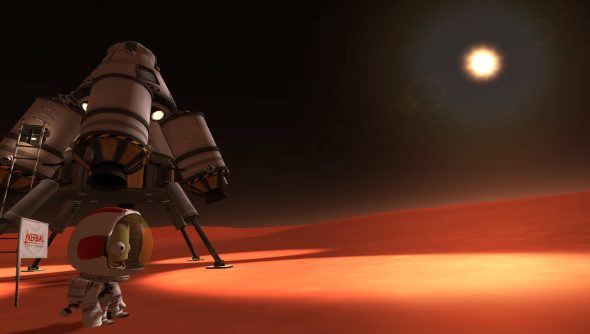 Kerbal Space Program’s lead developer, Felipe Falanghe, is stepping down after five years of working on the game, in the hopes of creating something new. While there are still big plans for the space sandbox, Falanghe feels like its time to let go of his creation.

For more freeform, creative fun check out our list of the best sandbox games on PC.

In a heartfelt Reddit post,Falanghe spoke about the journey of creating KSP, a project which started as a 2D game where you build rockets to see how high you can get, to what it is now: a 3D sandbox where you can run your own NASA, create a variety of spacefaring vehicles and even land them on other planets.

As Falanghe puts it: “To say KSP surpassed my every expectation would be, at best, a colossal understatement.”

He goes on to reminisce about a time “when any single design decision of [his] had the power to drastically change the direction of the project”, but now the game has settled down and it’s “conceptually complete”. This means that, while there is still lots of stuff planned for the game, there’s not much that can match the buzz he used to feel when creating something new.

“This isn’t to say KSP’s development is complete, however,” he clarified. “Far from it. Plans for KSP reach far into the future, and there are enough ideas to keep us all going for years. The console versions are coming up, there are new updates in development, the list goes on. For myself, however, I desperately need to have something new, to create more than one game in my life.

“I need to make one thing perfectly clear: development on KSP will continue as always. No features, upgrades, bugfixes or anything of the sort are being discontinued because of my leaving.”

He follows this up by affirming that the team can handle the tasks that are left and his leaving won’t affect the continued improvement of KSP. He then closes by thanking everyone there, the founders of Squad and, of course, the fans of the game.

So we’ll be getting more KSP updates and possibly a new game from its creator at some point in the future, then. Sounds like a good deal to me.