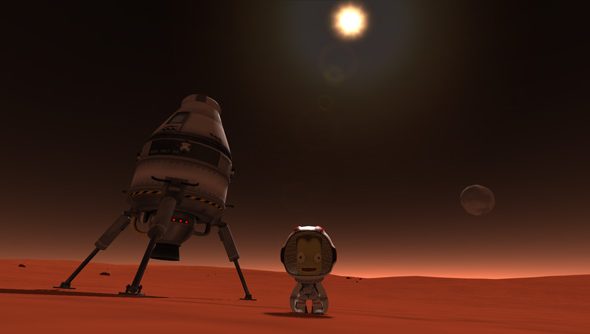 Kerbal Space Program is a game about flying into space by sitting on top of an exploding pipe, before rocketing around all of the planets, browsing a couple of moons, ramping off craters in custom-built rovers and collecting handfuls of space-dirt to take home and look at.

It’s a space exploration simulator in which you construct your own rockets and then try to get them to go up while staying in one piece. Most of your rockets will explode dramatically, sending burning debris and doomed cartoon astronauts cartwheeling spectacularly through the upper atmosphere in a glittering fireball of violence and death.

If you love space, you’ll love Kerbal Space Program. It seamlessly simulates an entire solar system from the tiny and upgradeable space centre from which you launch your missions, to the farthest and most difficult to reach icy planetoids, as well as their moons and their orbits and their surfaces and atmospheres and oceans. It’s persistent too. Land a probe on KSP’s analogue of Mars (the solar system is fictional, though roughly based on our own), and many years later on a manned mission, future generations may encounter its dusty remains. Lose an astronaut in space, and it’s possible to mount a rescue mission to retrieve him or her later. 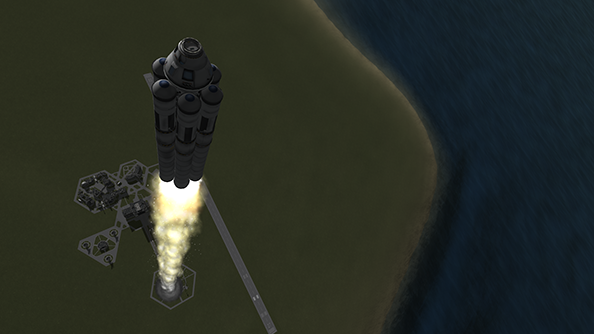 Behind its primary coloured exterior is a rigorous physics engine that demands multi-stage rocket designs, finely tuned engineering and a modest appreciation for the fundamentals of orbital astrophysics. The game starts you off with a number of basic rocket parts — an engine, a capsule and a fuel tank — and asks you to snap them together in such a way as to form a thing that will fly a few miles upwards without murdering its pilot.

Your first design won’t go into space, but will catapult your astronaut into sniffing distance of the edge of the sky. The horizon will curve just enough to hint at the vastness of what’s waiting above you, if only you had more fuel and bigger engines. 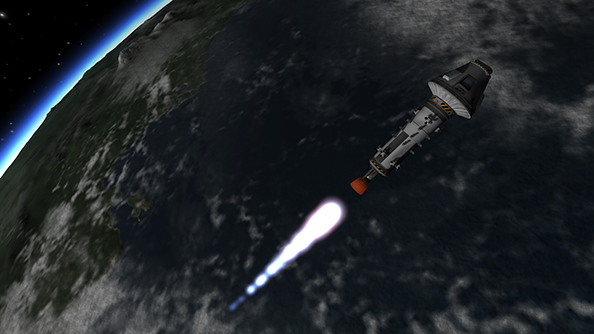 These exploratory expeditions earn you science points, which can then be used to construct more elaborate and powerful rockets. This is how Kerbal Space Program progresses, with you spending half your time meticulously engineering a new spaceship design using freshly unlocked rocket parts, before taking it out on the launchpad and attempting to fly it up and away into the cosmos to punch the idiot moon in its dumb face with your latest creation.

It’s an incredibly challenging game whose complexity will befuddle most new players, but the rate at which it metes out rewards will drive most to keep on slaughtering astronauts in the pursuit of science. A dozen ship designs in and you’ll have learned the particular trajectory required to reach an altitude at which you can enter a safe and stable orbit, seventy or so thousand kilometres above the surface. 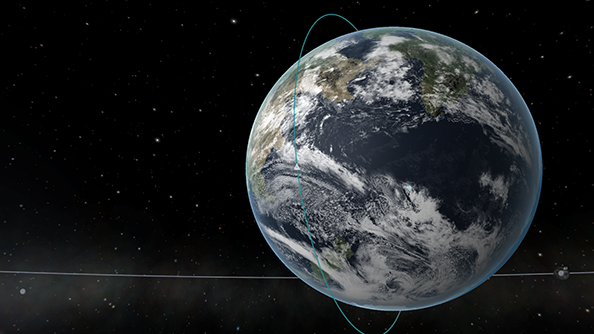 As a treat for effectively reaching the front doorstep of space, the game’s soothing galactic soundtrack begins to soak into your ears, and you realise that now, having arrived here on a screaming pillar of fire, you can switch off the engines and float in silence as the planet turns beneath you. You can even get out and go on a spacewalk, if you’ve upgraded your space centre enough to afford space helmets. That first orbit is a special moment, and there are so many others like it.

The first time you leave the planet Kerbin behind is a similar achievement, watching its horizon drop away as the planet becomes a blue disc that retreats into the starscape, a big old space marble rolling into the distance as your lunar destination grow larger and larger on your screen, its craters and mountains and valleys becoming distinct. 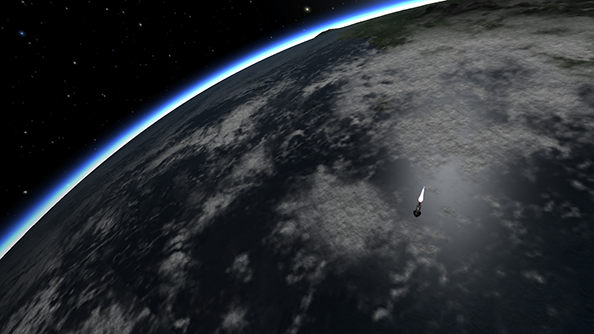 Touching down on that grey surface and bouncing around in low-gravity for the first time is one of the most satisftying feelings in games, as it’s proof you’ve mastered the maths and physics and numbers and equations and exploding rockets and death required to finally get there.

Kerbal Space Program had been in Early Access for one thousand years or so, transforming itself constantly to become the full release version that it is today. One of the more recent introductions to the game is its career mode, which doles out contracts that nudge you towards new objectives. 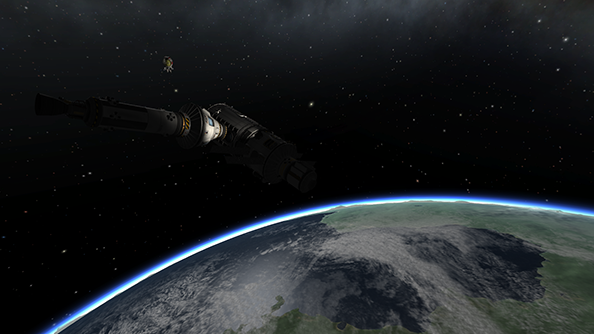 This mode also has you collecting science by attaching special apparatus to your ships and triggering them while on missions, and then spending that science in the game’s research tree to unlock new spaceship parts.

That initial guiding hand is useful, temporarily locking you out of the giant end-game rockets needed to reach the farthest edges of the solar system, and instead allowing you some time to get to grips with the pokier thrusters. In this manner you sort of end up seeing the sights of the solar system in the proper order: first orbiting the planet Kerbin, then performing a fly-by of its moon before eventually landing astronauts on its surface, and then eventually going farther. 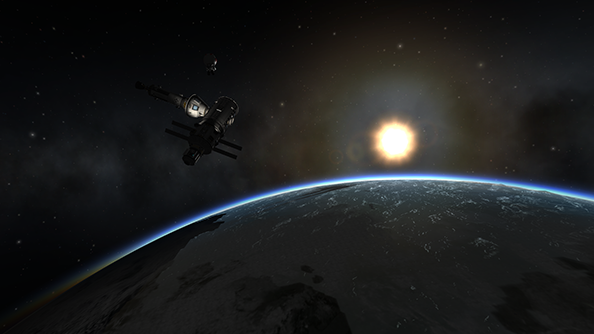 But the game’s heart remains in its sandbox mode. Science collection is still overly complicated and unintuitive for new players. Contracts start to throw out more interesting missions as you explore more of the solar system, but ultimately tend to repeat themselves.

The goals you set yourself are the most rewarding to complete, and Kerbal Space Program preents a blank canvas for the creative space-brain. Set up an orbital base, or land a rover on a distant planet and drive it around with the WASD keys. 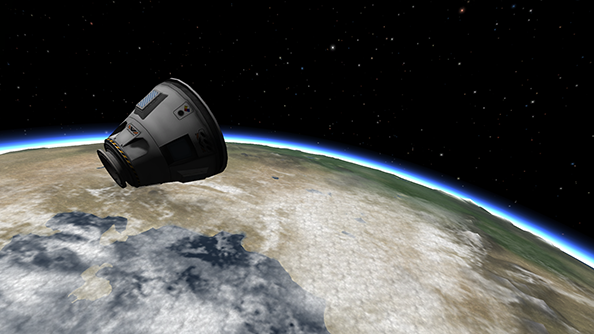 The safety of your kerbonauts can be assured early in the game by attaching parachutes to capsules and having them float gently back down to earth. And then, once you’ve started building large enough rockets to put your crew into orbit, you’ll have to start engineering heat shields to protect them from the rigours of re-entry and rapid decelleration. Once an astronaut dies they’re gone for good, and avoiding having to bury charred bits of crew is one of the unofficial objectives of most players.

So while the physics engine will present a challenge, the default difficulty is forgiving enough by allowing quicksaves. Plough your spacecraft into the dirt and you’re even given the option to turn back time to the moment before you launched, or a bit further to the vehicle assembly building in order to make changes to your ship. Changes that should make your ship a bit less explodey. Frustration never creeps in, and so watching your creations explode and all of your favourite crew members die is a repurcussion-free delight. 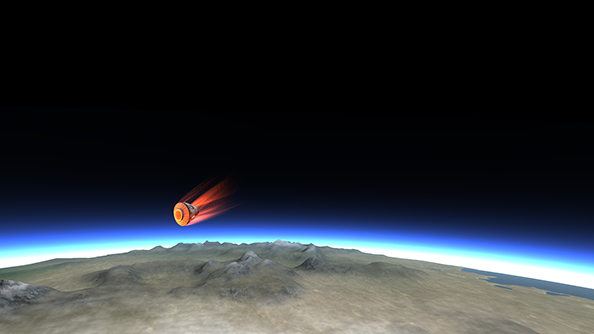 As well as simulating the void, KSP does a grand job of simulating flight, and your space centre is equipped with a spaceplane hangar in which you can bolt together aeroplanes. Again, the robust physics engine has you balancing air-intakes and jet fuel and engines and wings, and the game gleefully stokes your ambition to invent faster and bigger aircraft.

Planes are far more fun to fly in this update too, operating under an all new aerodynamics system. Air is less soupy now, you can go faster in it, but it likes to tear your planes apart at high speeds. It’s more realistic. 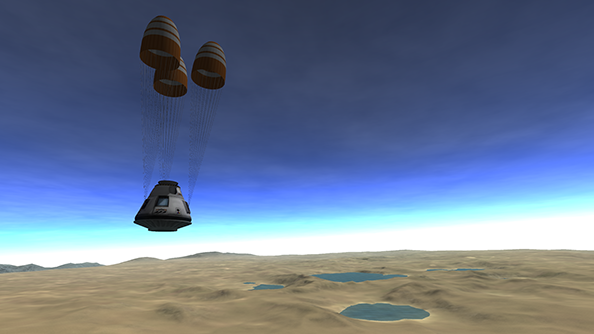 Kerbal Space Program’s difficulty curve is hard to manage. If it’s a game you’ve bounced off before, there’s not much chance of it grabbing you this time around either. There are still mods that are nigh-on essential once you’ve tired of the slapstick nature of manually piloting your ships into mountains. There are add-ons that will automate almost every aspect of a mission, from ascent to orbital transfer to landing, and despite the lessened interaction there’s still a weird joy in plugging in commands and watching as the maneouvres are carried out by a robotic hand.

But if you get as far as installing a mod, you’re perhaps already sold on KSP’s premise. It’s a simulator that beautifully captures the tediously incremental marvel of space exploration, that slow march of progress that starts with firing probes at the sky and ends with chucking an astronaut in a bucket and flinging the bucket into orbit to see what happens. It’s a toybox and a planetarium and an ode to poking at frontiers. To review it is to appraise the enormity of the human spirit of exploration, to rate the drive that spurred us to flop up out of the ocean and then up a tree and then back down again and then over some mountains and through some deserts and then off up into the heavens. 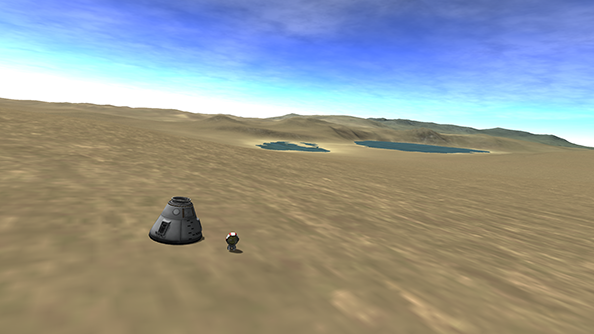