The galaxy in Killsquad is in chaos. Civilisations have been wiped out and many planets are wastelands, home only to terrible monsters and hordes of bloodthirsty aliens. From what remains of humanity, a few mega-corporations managed to survive and, even in the post-apocalypse, their number one priority is getting rich quick. That’s where your group in Killsquad enters. You play as one of four bounty hunters who ransack these dangerous planets on behalf of your corporate clients, fending off the monstrous entities that await you on the surface.

“Thanks to Unreal, we can forget about technology or performance, and focus on iterating gameplay very fast,” Seligmann says. “Being a cooperative online game, the Unreal online framework has allowed us to iterate with a facility that would have been impossible otherwise, especially thanks to the Unreal’s Gameplay Abilities system, this allows an action game not to suffer the effects of lag, since we are looking for a fluid and fast-paced experience.” 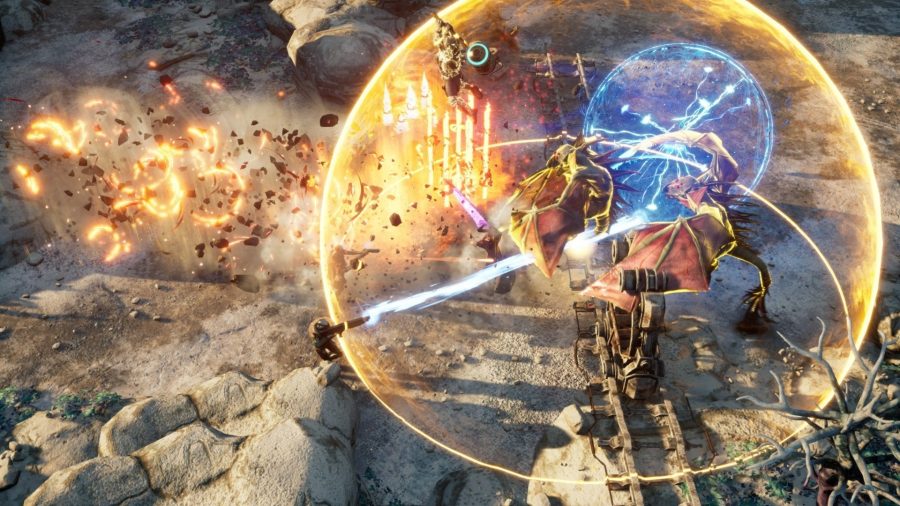 From the trailers and Early Access feedback, it seems Novarama has achieved the smooth, pacey action it was shooting for. The trailer erupts with energy: characters dart around the landscape, gangs of enemies unleash a barrage of threatening missiles, and huge monsters take turns to dominate the screen.

Thanks to Unreal, we can forget about the technology or the performance and focus on the gameplay

Seligmann explains that the art team has made excellent use of Unreal’s editing tools. Amid the chaos and explosive combat of Killsquad, the details stay crisp. Particles, meshes, destructibles, materials, lighting systems, animation, and level creation – all these tools have helped Novarama maintain colour and detail alongside Killsquad’s frenetic action. It’s not an easy feat, whether from a design standpoint or a technical one. “The levels of our game are created procedurally,” Seligmann says. “The level streaming system of UE4 allows us to dynamically load and unload the parts of the level, and this allowed us to render much more detail in the assets that are being displayed at that moment.”

The combat looks bombastic and fun, but it’s not just hack-and-slash. Novarama’s development team has a background in RPGs, meaning Killsquad’s characters have their own classes and skill trees to unlock as you progress. “We do not aspire to be an RPG,” Seligmann explains. “But rather, an action game that adopts some elements of RPGs. We have taken the core elements of RPGs and made them more intense and fun to play. [We have] shorter, more intense gameplay sessions, with greater rewards.

Many games have inspired by the genre-defining Diablo and if you have an ARPG itch to scratch then check out Iain's impressions of Mad Head Games' Pagan Online, an ARPG inspired by Slavic mythology. It's challenging and fast but accessible.

Seligmann is keen to highlight Killsquad’s contract system. It’s a community-driven mechanic where squads can sign up to missions, regardless of where players are based in the world. You can complete a contract with your friends, or join another group who need help. “The contract system enables players from all over the world to come together and tag along to fulfill missions and challenges,” Seligmann says. “For example, a player can publish a contract and this will appear to others, who can join it and together try to complete it, creating a community within the game itself.”

To flesh out their contract system, the team had a pretty complicated wrinkle to iron out: they had to create what Seligmann calls a robust network code infrastructure to handle the game’s matchmaking system, which proved to be quite the challenge. “Developing an online multiplayer game of action is especially difficult,” Seligmann explains. “You’re constantly fighting the latency and in our case, the action is very fast, which makes things worse.

“Our goal is always to give the best gaming experience ever, and we do not want players to feel the effect of lag. This has proven to be one of the most complicated tasks during development. So this is where we have used the Unreal Gameplay Abilities system extensively, and we have used a UE4 feature called network prediction. This allowed us to handle and solve the problems associated with lag.” 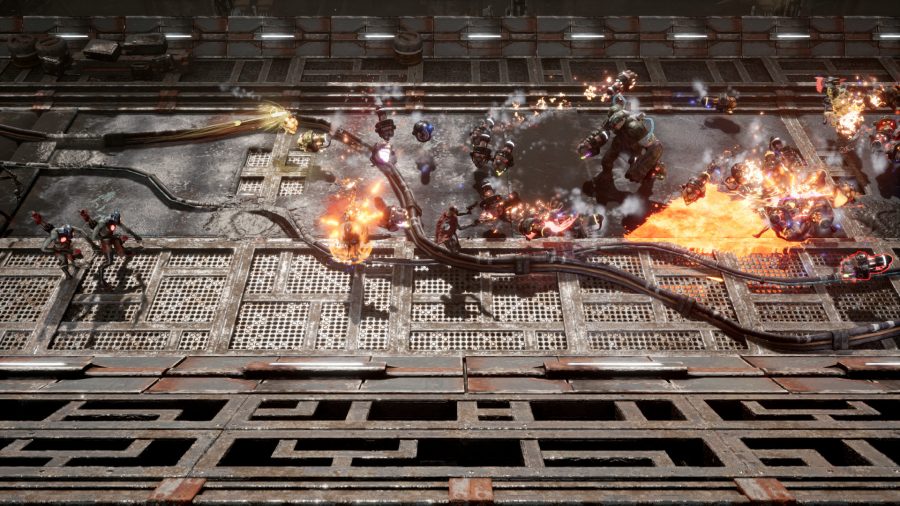 Novarama is taking full advantage of Unreal’s tools, systems, and editors to make Killsquad the best it can be. Procedurally generated environments, the online contract system, an enemy encyclopedia, skill trees, character modifications – there’s a lot going on here, and just to add /more/ chaos, Novarama has included environmental dangers that affect both your party and your enemies. A sudden meteor shower or unforeseen minefield can make or break a contract, so you and your crew will have to get a grip on these dangers.

“These environmental hazardous events are not something that depend on the contract itself, but can happen randomly,” says Seligmann “You may be fighting a ferocious enemy and suddenly a federation ship launches an orbital ray from the sky. Mobility is key – we firmly believe that an action game must nudge the player to be constantly aware of the environments, and how to avoid any incoming threat or damage.”

Read more: Which MOBA is right for you?

Killsquad is currently in Early Access on Steam, and Novarama has plans to release more heroes, planets, and enemy types as they continue to develop the game. The studio doesn’t have a release date yet, but has decided to trust in the community’s feedback to create the best version of the game they can. “We want to polish the game with the community with the Early Access release, and once we believe that we have a finished, polished game, we will make the worldwide official release. We do not have a hard deadline: it will be ready when it’s ready.”

Killsquad is due for release on PC later this year. Unreal Engine 4 development is now free.

In this sponsored series, we’re looking at how game developers are taking advantage of Unreal Engine 4 to create a new generation of PC games. With thanks to Epic Games and Novarama.