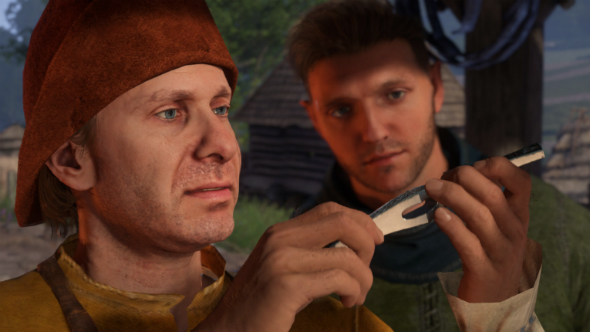 Once upon a time making cutscenes for a game didn’t involve three directors, nearly 60 actors, an in-house motion capture studio, a proprietary 3D scanner and a dedicated department of animators. This certainly wasn’t the case when cinematic director Martin Klekner joined Kingdom Come: Deliverance eager to help create trailers and videos for the marketing team by messing about in the game engine. That was back in the days when the game was still a Kickstarter campaign rather than a feature-complete medieval RPG with over 80,000 backers. In those three years Klekner’s role has changed in kind: “I was meant to be the trailer guy and ended up being the cinematic director.”

For a more general roundup of the game, here’s everything we know about Kingdom Come: Deliverance.

From Brian Blessed’s role as a mad German military engineer to the cutscene improvements that have been made since the beta, we spoke to Klekner and PR manager Tobias Stolz-Zwilling to learn how the game’s cinematics are being crafted. This coincides with Warhorse Studios’ release of their latest development update on the game’s cast and cutscenes, which you can watch above.

PCGamesN: Were there any games with particularly great cinematics that inspired you?

MK: I think the closest inspiration is probably in Ryse: Son of Rome because it runs on CryEngine, so the look is pretty similar, plus they have pretty great cutscenes. On the very first day I entered Warhorse I started studying the way that the guys at Crytek did their cutscenes for Ryse and tried to emulate it. In the end we talked to our art director and we decided, because Ryse wasn’t as historically proper as we wanted to be, that to make it more realistic we’d do it with less colour and none of this cool stuff and explosions happening. So we just copied their technique, not their style. 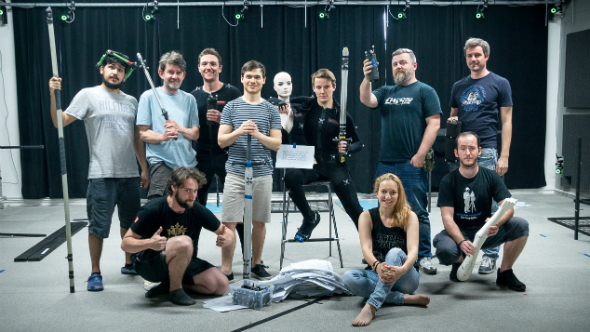 How was it working with two other directors?

There were three directors on set. Daniel Vavra, who of course wrote the script and knew the characters best and how every actor should play his role. Then there was the technical direction, which was up to me – that involved telling people how and where to stand and what they should be looking at. Every time we shot we just had this grey room and I had to tell them that over here there’s a castle, and over here there’s this other thing that’s important for the story. So that was my part of the job, plus I helped direct some cutscenes any time that Dan couldn’t make it in. Also there was John Comer, who was basically our translation guy and voiceover director. He was there during the shooting of the motion capture to make sure the actors were saying their lines the right way, or to keep them from making some historical inaccuracy.

How do you go about putting the cinematics together?

We put all of the animations together, which we have a whole other department for, then we put that into the world of Kingdom Come: Deliverance, the engine, then tried to figure out where to put this guy and this guy, and where to put the cameras.

But before the motion capture process we took the environment and exported it into our animation software to learn the measurement of the environment – if the character leaves the room, we need to know the dimensions for where the door is, or how far away some point of interest is. We then recorded the cutscene, put the motion capture that we recorded into that environment and tried to make it work, and then we created the cutscene cameras. We gave that to our animators and asked them to animate in accordance with the cutscene. And always there’s some back and forth. 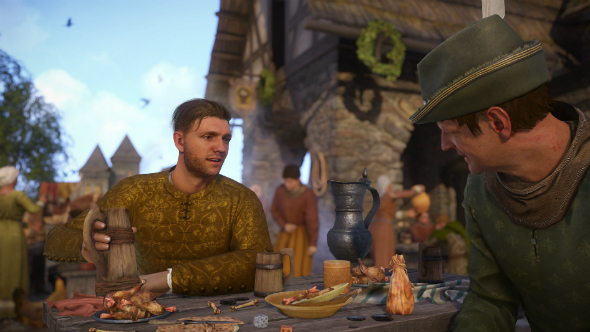 One thing I did at the beginning is that I took Dan Vavra’s story and put it into storyboards and put them all over my wall, but soon enough there were so many comics on my wall, so many pages, that I couldn’t fit it on my wall. Everyone comes into my office and thinks this is all of the storyboards for the game, but in reality I could never fit that into my room. We have up to four hours of cutscenes. I didn’t count the duration of cutscenes that were cut, but I think it was an additional two hours.

How important are cutscenes to Kingdom Come: Deliverance?

I definitely think that Dan Vavra, who wrote the story with his team of designers, he built the game upon the story. The game wouldn’t make sense without the story. At the beginning it’s almost linear because there’s so much story that you need to be led through in this world, and then at one point Henry is unleashed into the open world. Even then though, Henry is guided in a similar way to that of The Witcher, he is guided by the main quest from one point to another – every time something happens, there is a cutscene. 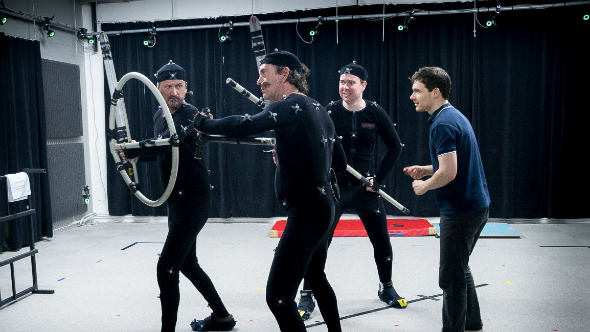 One thing that surprised me from the dev blog is the sense of humour in some of the cutscenes.

TS: The cutscenes allow us to tell the historical side of the world with some jokes, with some more detail, with some visual input for the player. Something like an interactive history lesson. It’s not just what king did what, it’s funny situations and so on.

MK: We watched the cutscenes in their entirety two weeks ago and we were very surprised at how much funny stuff there is in there. Only now do we realise that half of it is epic stuff and the other half is funny.

TS: With the cutscenes we’re dealing with real historical NPCs who really lived in this place. But we don’t know how they talked or behaved acted or spoke, we have some writings but we had to come up with how they act and walk. We had to add this personal experience to these characters.

MK: I have a feeling that if the game will be known for something it will be those funny scenes, those politically incorrect scenes.

What’s changed with the cinematics since the beta?

In the beta there really wasn’t much to show in the cutscenes, they weren’t epic or that interesting when compared to the full game. So when I finished the cutscenes for the beta I had this feeling that it’s not what I want to deliver for the final game so I knew that we would have to step up our game. Fortunately, the material in the full game is a lot more epic, there’s a lot more Lord of the Rings stuff. So now we’re wrestling with the facial animations, lighting and crowd simulations, so we’re still trying to improve that, but I think that just the raw story and cutscenes will be much better than what you see in the beta. 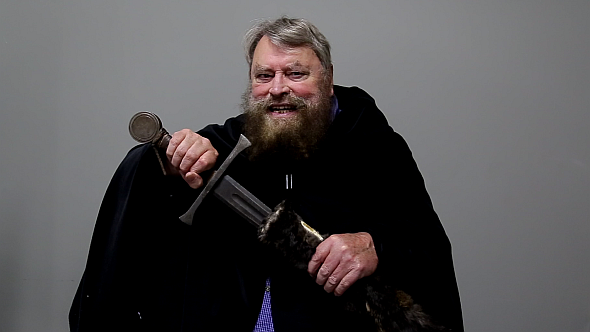 How was Brian Blessed to work with?

Brian Blessed came into our voiceover studio because he couldn’t make it for our motion capture performance so we had another actor play his movements, and then when Brian Blessed came he could already see the cutscene so he was basically dubbing over it. But yeah, it was great, it was like having this eccentric elderly man, telling all of those awesome stories that he tells. He was a great professional and it was an honour directing him. His character is this eccentric German siege engineer, and he’s always dreaming about new things to create and build but in our game the elite really don’t have much money, so every time he comes up with something they say there’s not much they can do about it. There’s a lot of comedy about these situations and he pictured it very well. It was great to work with him.

How did you maintain a sense of historical authenticity on set?

John Comer and Dan Vavra talked a lot about this, about how characters would talk and behave. At the beginning we thought we could just get all English actors because it sounds historic, but we are based in Prague so there’s not many English actors, so when we did the casting we realised that to have good actors and for all of them to be British was too much, so we threw in some American accents, even some Australian actors, but we don’t think it’s too noticeable. 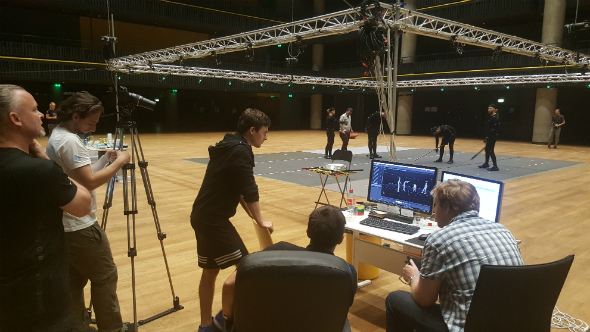 We had long sessions with the actors trying to explain every little detail. Often when they came into the studio for the first time they were very surprised that we were trying to do the game with this level of historical accuracy, but I think having myself, Dan and Comer alongside who know the era very well we were able to catch and correct issues on set.

Finally, what has been the most difficult part of the process?

Everything? I think that working in the limited conditions that we have here. We don’t have a huge production here and we try to make the best of it, which was great because it was like an adventure, but at the same time it was a curse a lot of times because every step of the way we were learning new things and that held us back. So definitely the limited conditions, and also trying to make the epic story work in them. For example, our motion capture studio was like five by six metres and our actors needed to be running around for like 20 metres, so we had to tie a lot of the animations together.

TS: At one point we had to move the entire mo-cap set five floors down to a concert hall to film the fighting scenes.

Looking forward to Kingdom Come: Deliverance? Let us know why in the comments below.