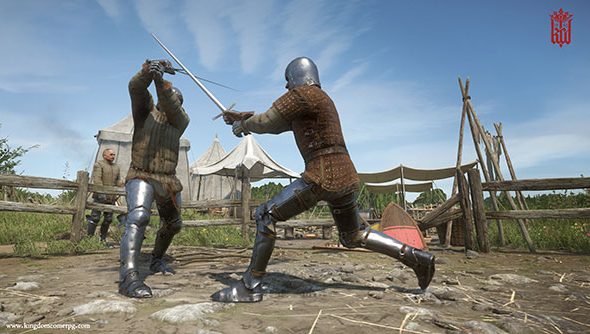 Can a western RPG today succeed without incorporating some kind of fantasy or sci-fi elements? The success of the Kickstarter campaign for Kingdom Come: Deliverance proves that there is demand to turn away from the genre’s usual dungeons-and-dragons tropes, and playing the first beta alongside Warhorse Studios’ Tobias Stolz-Zwilling and Martin Ziegler, makes it clear that they’re determined to do things differently.

The beta starts some way into the story, with the hero Henry (a fixed character who you can only mildly alter in appearance) working with a local lord, Robard, and his army to track down a bandit called Reeky, who was involved with the sacking of a local village who may know something about those responsible for the murder of Henry’s family. All this pillaging and chaos is the result of the kingdom of Bohemia being invaded by King Sigismund of Hungary, so Henry’s own story is closely tied to the bigger historical picture.

As I get plonked down into the world on horseback outside the castle of Talmberg, the first thing that strikes me is how rich and fecund the countryside of Bohemia looks. The landscape is dense with nettles, scrubs, and subtly animated foliage (a welcome contrast to The Witcher 3’s vegetation, which sways with all the nuance of a tornado). 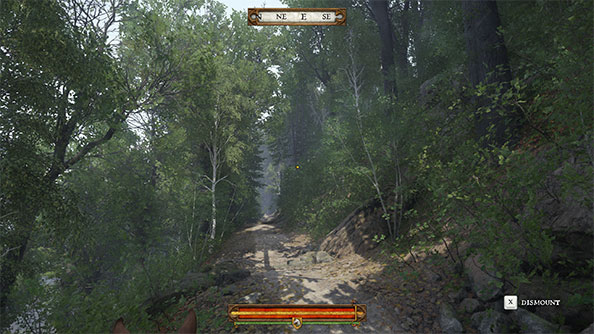 “We made 3D models of the original trees before putting them in the game,” Ziegler tells me. “We didn’t use Speedtree or anything like that. Everything you see was handmade and brushed over the world”.

The scrupulous level of care is evident as I trot through the forest, where each tree has its own character, carving its own path up towards the sun rather than being part of a homogeneous mass. Some kind of insect flies across my screen as I gaze into the seemingly neverending, realistically ragtag woods, but snap out of it when the Warhorse guys remind me about my mission.

Errr, what was that again? Ah, revenge for the death of my family. Of course…

I head into the village of Talmberg to start asking questions, and notice that there are no GPS arrows, mini-map, or specific location or person I should approach. It feels refreshing, and recalls the sense of intrepid adventure brought about by stepping into Morrowind for the first time, which had a similarly laissez-faire approach to quest markers. Relying on my own wits, I do what anyone would do in the situation and start speaking to the locals, who – gossips that they are – tell me that Reeky’s been involved with a local wench called Adela.

After kindly rejecting Adela’s advances (alas, no option to accept them), I decide to play ‘bad cop’ and try to intimidate her into cooperation, which fails. I then attempt the charm offensive but it’s too late. She’s had enough of me and I’m not getting any more info out of her. Ziegler explains: “If you mess up, or fail in your speech, then you’ll lower your reputation with this particular person and they won’t help you. We don’t want you to just use every option and see what works, but really think about every decision you make.” 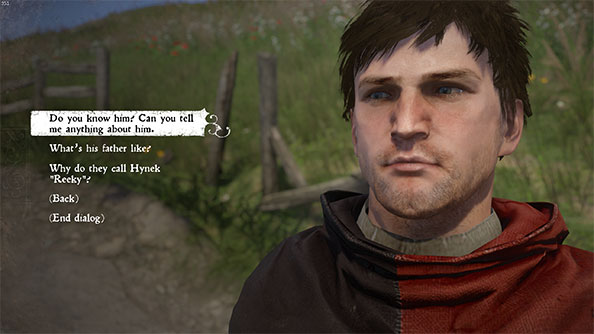 As someone who finds the spaghetti-at-the-wall speech systems of most RPGs too trivial and simplistic, this is something I can get down with. Adela was flirtatious and open, and I failed to observe those traits and play to them. Your appearance affects persuasion too, so trying to intimidate a hulking bruiser in plate armour would likely end up in a scrap, while if I’d turned up at Adela’s with my armour painted with her neighbour’s blood, she’d have been more forthcoming out of sheer fear.

Adela’s dismissal of me meant that only one of the three possible avenues to tracking down Reeky opened up to me (though Ziegler points out that the persistent world means that I could theoretically stumble upon these, or even Reeky himself, by complete chance). This is just a small-scale example of the impact ‘reputation’ has on how your game will play out. Each person, village, and even bandit group has its own gauge of how it feels about you, opening and locking off certain quests or opportunities depending on your standing with them.

“If you screw up, by committing crimes for example, you can counter that by completing quests for people to make it up – or by doing small repeatable tasks like hunting meat for the innkeeper or collecting herbs for the local alchemist” explains Ziegler.

And what if you choose to lead a life of crime?

“If you’re a known criminal in a certain area, people will avoid or even flee at the sight of you. It might also unlock other quests tied to you being a criminal. You can, for example, get approached by bandits and criminals to do smuggling, thieving, or even killing missions.” 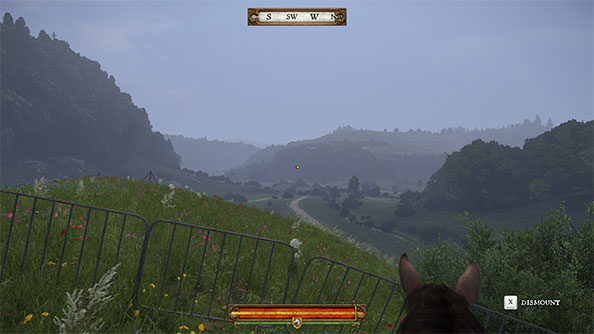 All this portrays Kingdom Come being a dynamic, persistent world, which creates opportunities for emergent gameplay even within the main quest. Ziegler stresses this by saying that if I take too long to find Reeky, then he’ll get killed by other bandits looking to silence him, which would then force me to find another way of tracking down my family’s killers. ‘Like hell am I letting someone else have that satisfaction’, I think to myself, before heading off to track him down at a cave in the woods (those beautiful, beautiful woods). Once the no-good scummer gives me another lead to follow, I’m pleased to learn that I can sneak up behind and insta-kill him.

As Reeky slumps to the ground, it dawns on me that little has been said about the stealth aspects of the game, with most of the spotlight thus far being pointed at the physics-based sword-fighting (which to me still feels in need of refinement, and lacks that physicality and impact to be truly satisfying). So can I play the cloak-and-dagger cut-throat?

Much like in Thief, you can sneak around, carry corpses, and knock people out or kill them from behind with single hits. “We still plan to implement hearing,” Ziegler tells me, “which will be specific to certain surfaces, shoes and so on”. If you have potions to hand, you can poison anyone’s food, or even technically spike a whole village’s food supplies with stat-buffing potions if you so wish. “One guy made a whole village amazing at archery this way. We want to see people get creative with these systems.” The sneaky play style is very much there for those who want it. 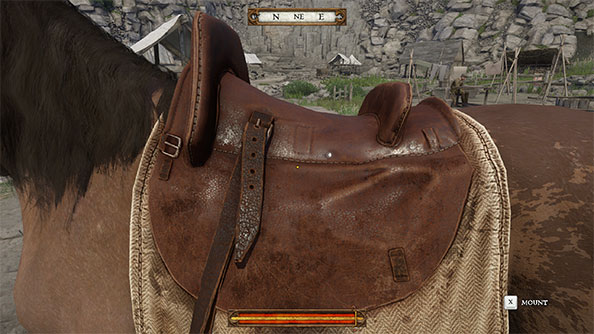 We skip to a battle at the end of the beta, where Robard’s forces try to take out the local bandit battalion. The scale is impressive, as Henry is just one of 60+ soldiers fighting simultaneously, with archers sniping from hiding spots hundreds of feet away, soldiers stumbling around in the mud, and a great sense of being in the thick of the action. Not that I was prepared for such action, and within a minute of running around and admiring the carnage I was hacked down, bringing my preview to an unceremonious end. Even from beyond the grave however, I was quietly impressed.

Kingdom Come is clearly not the finished article – the ambitious combat system still needs work, and the world doesn’t yet feel alive with opportunities for questing and impromptu adventures like the Witchers and Fallouts it’ll be looking to succeed.

But even though the game is set for a late-summer release, Warhorse seem determined not to rush anything, paying tremendous attention to evolving upon RPG systems like speechcraft and reputation, and refining those visual flourishes (just look at the textures and scratches on that saddle!) that bring the world to life. It’s an ambitious project for sure, but Warhorse are keeping sight of those ambitions, reassuring me that they still have the potential to deliver the first great, truly historical RPG.

Now, I’m off for another wander in those mesmerising Bohemian woods.