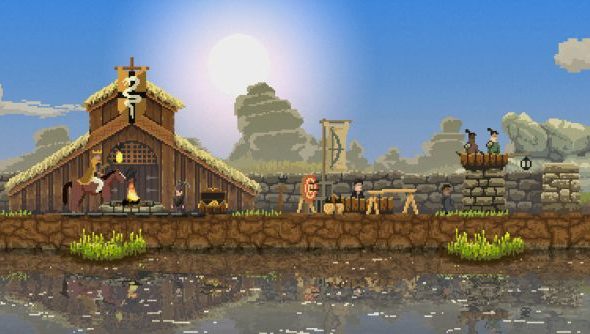 Here’s a pleasant little oddity we don’t seem to have posted about before. Kingdom is a charming pixel-art flash game about founding and maintaining a village, funding your populace and their defenses against horrifying noodlemen. You can play it right now. It’s also getting a commercial reimagining, the first trailer and details for which are below.

The man behind it isThomas van den Berg, a Dutch game designer. The basic concept, as in the Flash, is collecting coins from various sources and using them to upgrade your town, gather more followers and equip them with tools to fight and build. At night, the trolls arrive to steal your crown. As the game puts it: no crown, no king, game over.

However, the new version will expand on that. Not only is it a bit more graphically complicated, there’s more ways to defend yourself and your people than before. There’s also reason to explore the land around your settlement as goodies (and horrors) are waiting out in the forest.

Done when it’s done is the timeline for release.