Kingdom is a gorgeous side-scrolling strategy and management game that launches today, and I’ve been playing ruler of several burgeoning settlements, attempting to survive in an unfriendly world.

You see, Kingdom adds a wrinkle to the whole building and resource gathering loop: permadeath. As well as making sure the settlement is safe, you’ve got a monarch to look after, and if that ruler loses their crown, it’s game over.

I’ve been seeing that game over screen a lot. 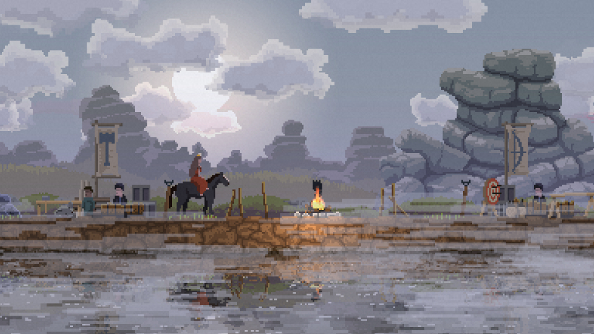 Here’s the deal: you begin each life in a procedurally generated world with a random male or female monarch. You have nothing but a horse, a crown and a torch, which makes you a rather unimpressive leader. Thankfully, you’ll quickly find a bit of gold with which you can hire random peasants wandering around the world along with the skeleton of a settlement.

Your typical strategy or management game is all about information – how many resources do you have, what’s your population, what troops does your enemy have and so on. Kingdom eschews all of this in favour of giving you almost no information at all. At the start, it teaches you how to buy things – the only resource is gold coins – and how to move. From there, it’s up to fresh-faced monarchs to figure things out for themselves.

This only works because Kingdom is exceptionally simple. The 2D, side-scrolling world is driven by cold, hard cash. You spend money to build on nodes dotted around the world, or you can bribe peasants to join your glorious kingdom, who will then work to make you more cash through hunting and expand the town by chopping down trees to make more room. The goal is to build your kingdom up during the day by buying up new villagers, purchasing tools for them and accumulating wealth. When night falls it’s just about making it to the next morning. 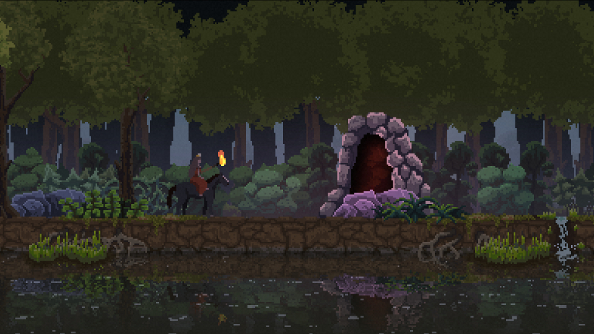 Some nights, it’s lovely and peaceful, while others see little beasties testing the walls of the town, attempting to break in and steal gold, tools and the monarch’s all important crown, the theft of which ends the game. They start off as easy to kill, though only archers and guards can actually do the killing – it’s far too dirty a job for a king or queen.

I failed a lot in my first attempts to found a kingdom, usually outside of my town’s walls. The game encourages exploration, but makes wandering around the land rather risky. While monsters only attack at night, disturbing their portal summons them, often leading to a game over state unless you can escape quickly. If you’ve got coins, then they’ll just try to steal them, but once all the coins are gone, they’ll be after your crown.

It all felt a bit unfair, those early failures. Unlike Dark Souls or FTL, there’s no fighting back, and I found myself needing to start over frequently, not because I cocked up, but because I didn’t realise monsters could appear during the day, or that my horse runs out of stamina, or that once all my coins are gone I’ll soon be toast. 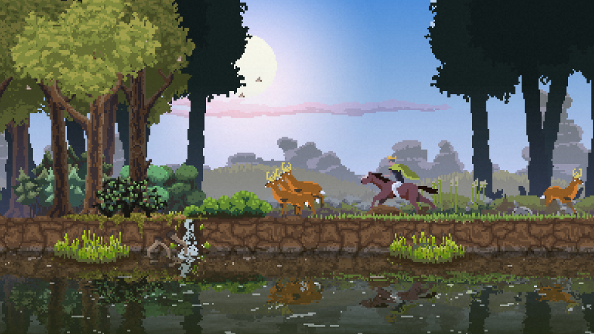 The game was really just teaching me those things, though. It was tough love, and forced me to be more cautious. Those first attempts are, for all intents and purposes, the game’s tutorial. With this new knowledge under my hat, things all started to fall into place.

I got a handle on how long my horse could gallop for before needing to catch its breath, when I saw a portal I immediately retreated, and I never went into the woods without a purse fat with cash. I became more thoughtful in my approach to construction, as well. Expansion is important, sure, but expanding too much in the early stages is a major risk. 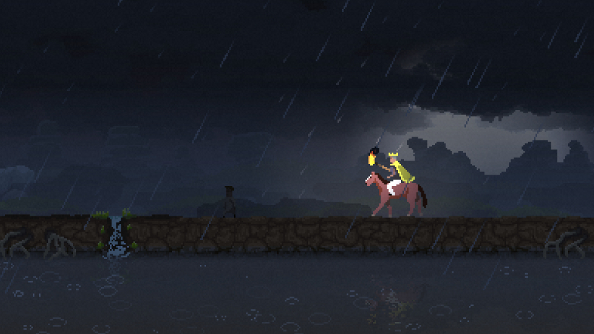 Chopping down trees seems simple enough, for instance. You spend a coin, and mark the tree with a cross, then any free labourers will pop on over and chop it down, returning that coin and creating more construction space. But if you’ve deforested the area close to the settlement, then you’ll need to go further afield. Will you make it back in time before night? Will the labourers? Suddenly, this mundane gathering task becomes one where you have to weigh up how much you need gold with the massive risk.

There’s tension, then, and lots of it. Yet Kingdom is also a soothing game, blessed with a striking pixel art aesthetic that is not remotely ‘retro’ and a calming soundtrack. And it’s rewarding, too. When you see all your little minions automatically going about their work and look at your coin purse, bursting with gold, everything seems right with the world.

It’s all a trap, though. The permadeath system isn’t just a teaching aid – the game really does want to kill you. Some nights, the atmosphere changes. Maybe a blood moon appears. Perhaps the music changes and the skies becoming threateningly ominous. There are hints that something terrible is about to happen. And then comes the din of battle. 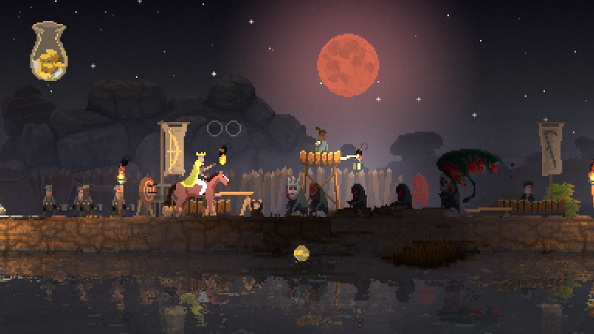 Flying eldritch beasties and masked demons swarm walls and guard towers, determined to steal everything they can get their disgusting claws on. They break down the walls, relentlessly hammering on them, while villagers cower and flee. Surviving such an attack means watching the sun rise over desolation. You can rebuild, of course, and villagers usually survive, though with their tools stolen they become neutral and must be re-bribed.

I’ve survived a few of these attacks, and even with a veritable army of guards and archers – and even a few catapults – it was tough going. Inevitably, though, one catches me out and I lose my crown.

Losing everything is a punch to the gut, especially if you’ve just spent an hour building up an impressive town. Despite this, I remain optimistic about every new attempt. This will be the one where I actually find out what the win condition is (I’m assured that there is one), I think. I’ve learned something from every failure, even the frustrating ones. Hell, they’re all pretty frustrating.

Kingdom, against the odds, makes this strange marriage of permadeath and strategy work. This is a game about discovering everything for yourself, making each little victory feel like an impressive accomplishment, even if that victory is just learning what you need to do. In a genre that normally flings information at you, Kingdom wraps itself up in mysteries, which is as bold as it is refreshing.