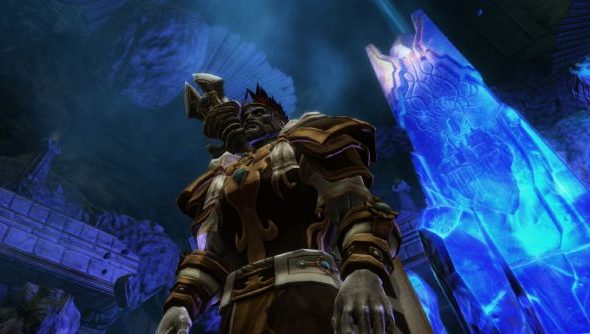 It appears the storm surrounding failed developer 38 Studios may finally be dying down, with those behind the outfit – which include former Red Sox pitcher Curt Schilling – agreeing a settlement in a lawsuit filed against the company.

Have a look at the best RPGs on PC here.

If you’re not up to speed, 38 Studios was founded in 2006 by Schilling and set about working on RPG release Kingdoms of Amalur: Reckoning. However, the company ran into trouble as part of a move from its original base in Massachusetts to Rhode Island.

The studio sought a loan to fund the move, with $75 million sourced from the Rhode Island Commerce Corp. – a state funded agency designed to invest in Rhode Island’s businesses.

When 38 Studios eventually went bankrupt in 2012, the deal with the agency was brought into question by officials given it had handed over taxpayers’ money on the assumption the move would create 1,450 jobs in the region – jobs that, ultimately, never materialised.

Though Schilling and co. escaped any criminal charges as part of the official, four-year investigation into the deal, other private lawsuits against those involved – including US banking giant Wells Fargo – have continued regardless.

The aforementioned latest settlement with Schilling will see Rhode Island Commerce Corp recoup $2.5 million, if approved by a judge. Last month the agency also received amounting to $25.6 million as part of a settlement with Wells Fargo Securities and Barclays Capital Inc.

Though the settlement is no admission of guilt by those behind 38 Studios, it will bring the amount spent on settlements by those involved to around $45 million.

USA Today reports the bulk of the latest settlement – around $2 million – will be spent on paying back bonds. As a result, Rhose Island taxpayers will still owe more than $28 million on said bonds.