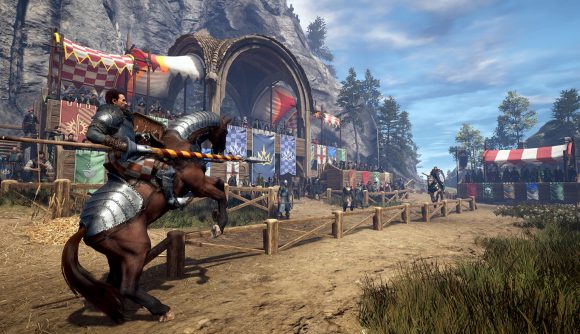 King’s Bounty has gotten plenty of sequels since publisher 1C Company revived the series in 2008, but now the company has a much more direct follow-up in mind with King’s Bounty 2. While that title implies a back-to-basics approach, there’s plenty of reinvention alongside the classic brand of tactical strategy.

The big change is that you’ll now explore and adventure in an open world that offers a “cinematic story.” You’ll choose between three characters with their own narratives at the outset, and your decisions over the course of the story will affect how the plot plays out and how NPCs react to you, pretty much as you’d expect from a modern, open-ended RPG.

But it’s still a tactics game in the style that would eventually inspire Heroes of Might and Magic. Whenever you hit a battle in the world, the terrain of the strategic map will reflect where you were standing – which means you can position yourself before combat for a strategic advantage. The arenas will also have more geographical features including hills and valleys.

Your squads will be made up of “wholly unique units,” made up of humans, elves, and other folks who’ll build bonds as the adventure continues.

There’s no gameplay footage in the trailer above, but the footage does suggest that we’re in store for a more grounded fantasy style in comparison with 1C’s previous takes on the series.

King’s Bounty 2 is set to launch in 2020 – you will be able to pick it up through Steam – but we don’t yet have a more specific release date than that. 1C plans to show the game in more detail at Gamescom next week, so we’ll have a better idea of how it actually plays very soon.