It’s been nearly seven years since the last King’s Bounty game. In that time developer 1C Entertainment has gone back to the drawing board with the aim of overhauling and reimagining the beloved fantasy series for a new and modern audience. Their plan? Combine the tactical combat of 2007’s King’s Bounty: The Legend with a Witcher 3 style open-world adventure. The result, King’s Bounty II, shows glimmers of promise, but struggles to make the most of either inspiration.

I played through most of the preview build twice, each time with a different character. Aivar is your stock mercenary fighting man; gruff, grumpy, and adept at punching his problems away. Katharine is a sharp-witted noble, as deft in arcane magic as she is at delivering one-liners. My journey through this small slice of King’s Bounty II only provides a limited amount of exploration and problem-solving scenarios that are specific to these characters. Anything that requires magic to bypass – having to interact with a rune for example – is out of the question for Aivar. For the most part though, both characters are free to navigate situations however they see fit.

The main story doesn’t really grab me. It’s a hodgepodge of magical prophecies, political intrigue, and impending doom, and you’ll no doubt have seen versions of all of these things before. With the exception of some choice NPCs, the wooden voice acting and bland writing doesn’t make investing in this heroic quest particularly tempting. You hit the same plot beats no matter which main character you choose, and NPCs treat every character the same way.

Side quests are abundant, as seemingly every town guard and pauper has something to ask of you. These jaunts tend to introduce the best characters, but also feature the most absorbing storytelling. A couple of my favourite side quests involve chatty skeletons – one was a mage who had a magic mishap, the other was a child who was a victim of a terrible crime – which speaks to King’s Bounty II’s potential to flesh out the world of Nostria with interesting stories. 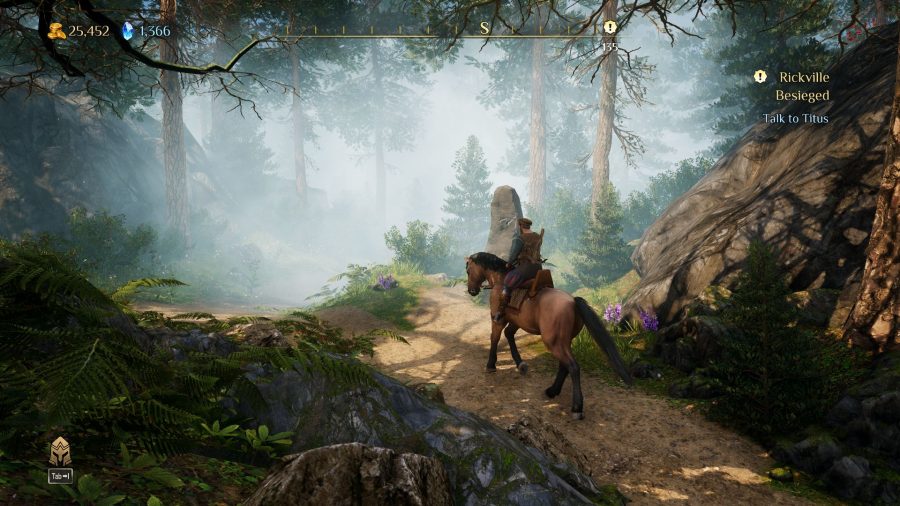 Nostria itself is gorgeous. Its epic fantasy inspirations are clear and present in the massive, Tolkien-esque structures that dominate the skyline, and the swampy blighted zones reminiscent of that scene in The Neverending Story. Living in the shadows of huge elven mage towers are poor peasants in threadbare clothing, grouped in little villages just trying to get by. The frosty forest of the Albian Highlands and the rolling plains of the Crown Lands are both nuanced and complex maps with lots of interconnected paths and points of interest.

All that said, you’re pretty limited in how you explore this beautiful world. Disappointingly, very few doors can be opened, and you can’t climb up ledges. Besides trotting down winding paths to get to each destination, you can warp from fast travel points, but it feels very linear and direct for an open world game.

The turn-based strategic combat is very reminiscent of King’s Bounty’s spiritual spinoff, Heroes of Might and Magic. Each unit, yours included, is a squad full of individual members that make up a cumulative health and strength total. Your character watches sternly over the battlefield in a leadership role, casting supporting spells to buff or damage units. Both characters can use magic, but Aivar can only use disposable scrolls, while Katharine can cast spells until her mana pool is empty. 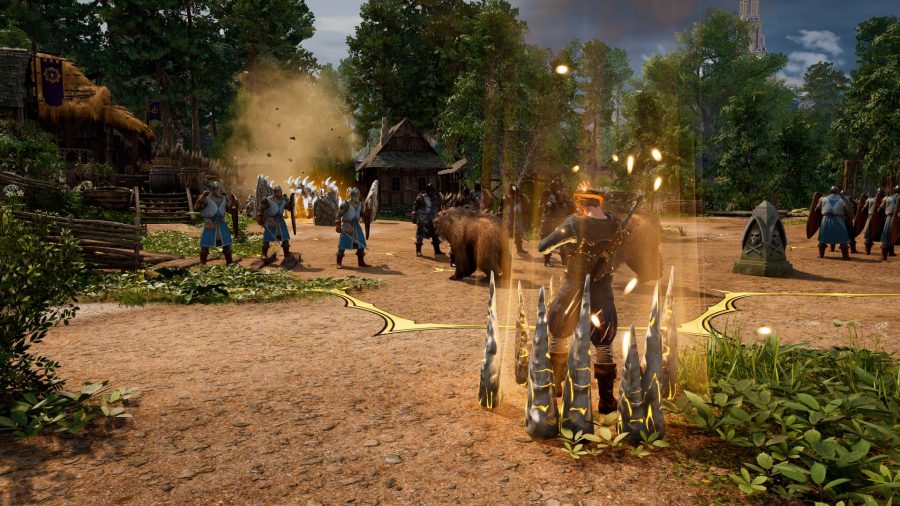 It takes a bit of time to navigate all of the information on the HUD at any given time, and even then I wish some key details were clearer. An indicator to tell me if my archers will have line of sight on the enemy in their new location before moving them is a frustrating omission.

Nostria's fantasy inspirations are clear in the massive, Tolkien-esque structures that dominate the skyline

Despite some fights that I’m able to steam roll, many of the battles in King’s Bounty II require a lot of trial and error to beat. Enemy units always seem to know how to efficiently exploit your weaknesses and show absolutely no mercy when doing so. In the early stages of a battle any small slip up can be the domino that brings your whole ploy crashing down. With time you start to identify which of your units can make the most out of any given encounter and act accordingly, but the slipway to competence is pretty steep.

Since battles feel like they can be won or lost based on how you set your army up, King’s Bounty II at least gives you the enemy army list before you engage. Mercifully, you can opt out of a fight too, giving you a moment to reshuffle your troops or return to the fight another time. 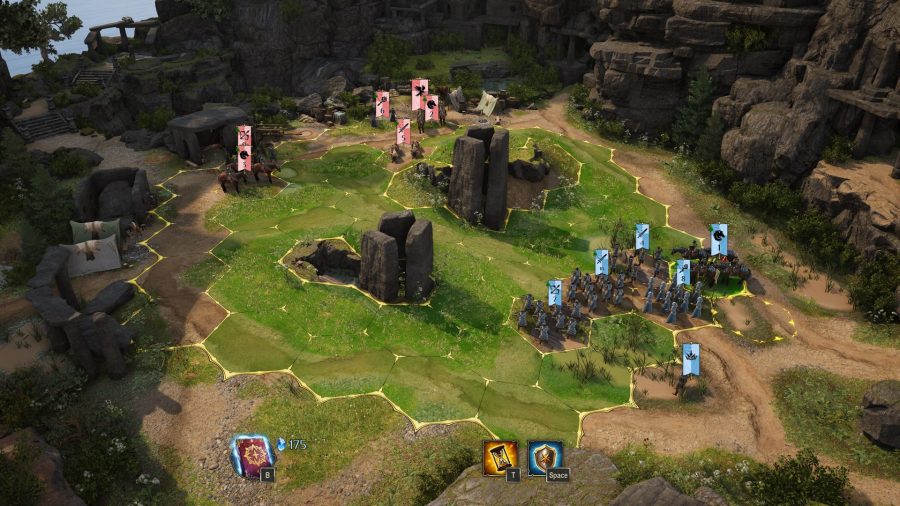 If you do lose the fight, it isn’t game over, but it does suck. A loss sends you back to the adventure screen without any of the friendly units that died during the battle. This is a curse in disguise. Initially it seems like a fresh opportunity to raise a new army and try again with some revised tactics, but the opportunities to do so become slimmer and slimmer with each loss. Units are expensive, and there are really only three ways to get gold: completing quests, winning battles, and selling loot. The first two are often connected and can thus be exhausted, meaning if you’re stuck on a particular battle the only way to get stronger is to plunder every barrel, backpack, and unturned rock for trinkets that can be sold. And if you’re really stuck then eventually you’ll run out of loot to plunder, too. At some point, you’ll run out of the ability to continue, even if it seems like King’s Bounty II is giving you all of the time in the world to try. Saving often is the only way around this, especially since autosaves are rather sparse.

There is a lot to like about King’s Bounty II on paper, but after a few hours with it some concern is creeping in. The commitment to bring a big open world adventure to the turn-based strategy games space is one they get right in form, but not always in function. The bread-and-butter combat is rewarding if you have the patience to weather its steep learning curve and are willing to work around some of its chokepoints, but it can be a devastating challenge for all but the most determined strategy gamers.

The King’s Bounty II release date is set for August 24th, and it’s releasing on PC, PS4, Xbox One, and Switch.