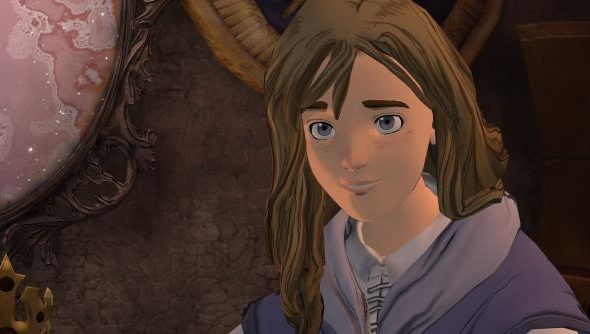 PAX hasn’t quite turned into a Gamescom/EGX mini-E3 yet, but gosh if it isn’t trying. When Wil Wheaton isn’t telling you all about the next iteration of your favourite card game or every podcast you’ve never heard of is having a live recording, there’s the odd bit of games news leaking out too. Such is the case for the second episode in the new King’s Quest series, which Fraser enjoyed the first iteration of earlier this year. The Rubble Without A Cause name and a short teaser were revealed at a panel, along with some further tidbits.

There’s very little to the teaser, though it does leave me wondering why, with the creative power of an entire games studio at your fingertips, you would decide to design goblins that look like little walking poops:

Some questions just don’t have the answer.

As for the panel itself, Polygon had the scoop. The episode will be based around the (spoilers for the first chapter, I suppose) now-King Graham dealing with the kidnapping poop-goblins seen in the trailer. They’ve nicked off with most of the population of Daventry – taking them back to their home plane of Dysentery, perhaps? – and, naturally, Graham’s gotta save ’em. Creative Director Matt Korba said it would be more reminscent of King’s Quest 3, versus the first chapter’s similarities to the first game, adding “Those games were always changing and evolving. We want to play with that.”

Also at the panel it was said the chapter should be out before the end of the year. Another episodic game that can’t keep a regular release schedule, removing at least half of why the model is attractive. Ah well. Anyone excited for further adventures in the land of Daventry?