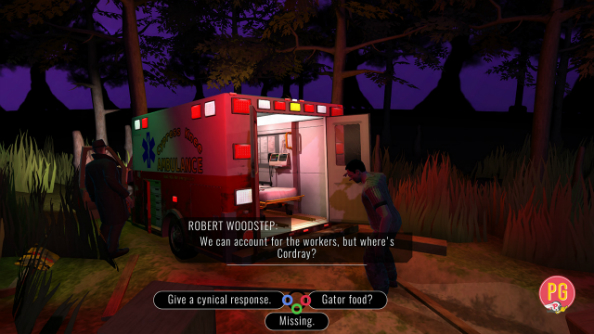 I don’t often evangelise videogames – at least, not aggressively. It’s your life, after all. What do I know about your personal tastes and peccadillos? I’m making a bit of an exception with Knee Deep though. I think you should play it. There’s a really charming mix of Kentucky Route Zero, Deadly Premonition, Telltale adventure game and stage play within it that I really engaged with in act one, so I’m excited to hear that act two is out right now.

Looking for more titles that don’t demand monstrous system specs? Head on over to our best laptop games.

Let’s unpack those lazy journalistic comparisons, starting with Kentucky Route Zero. It’s a southern gothic piece, set in Cypress Knee, Florida, which follows the events set in motion by a washed-up actor’s suicide. Like Cardboard Computer’s three act game, when you’re presented with dialogue choices you get the feeling that you’re choosing from possible realities, rather than simply picking what that character thinks in a given moment.

Deadly Premonition? Well, production values are not high. In fact, the mannequin-like characters and slightly overcooked voice acting emits a sense of unease and dreamy atmosphere that conjures David Lynch movies – although Knee Deep doesn’t lean on the director’s material like a crutch, as Swery’s game does in this writer’s humble opinion.

As for Telltale adventure games, your interaction is largely limited to dialogue choices and while there’s no fail state, it’s possible to “lose friends, respect, and the moral high ground,” as the game puts it.

The element I’m most drawn to, though, is that of the game’s stage production-like sets. As a character reads texts on his phone, they show up on a billboard behind him. When someone gets in a car, a rolling landscape rattles between two reels behind it as they did in old movies. Scene transitions are frequently clever and inventive. It’s all designed to look like a live stage play, and that makes for a really effective backdrop for the story.