It’s that time of the week again, and PCGamesN returns to help you cut through the noise, and tune your signal into some of the most intriguing experiments in the indie scene this week, one enticing image at a time. Check out the latest crop below, and check back next week for more. Plus check our our lineup from last week, February 18, if you missed it!

As withlast week, these games are picked from the most recent roundup onthe #ScreenshotSaturday tag, but if there’s a better trailer available than the latest animated GIF shown, we may use that.

Any or all of these games could be the next big thing.Here’s some of the best indie hits of recent years.

If a pretty, pixel-art game about running a farm and establishing relationships with NPCs sounds familiar, that’s probably because you’ve played Stardew Valley, which PixelCount’s Kynseed bears more than a passing resemblance to. But this isn’t just more of the same: the Kynseed team includes developers who worked on the Fable series, and here you’ll be able to choose between several professions in a more high fantasy setting. You can run a tavern or a general goods store, or start work as a blacksmith.

The game is named after an ancestral acorn, and you’ll play multiple generations of characters who form a family tree, through which you’ll pass on the knowledge you gained to your children. People (and pets) grow old and die, so you’ll be shaping a family legacy as much as any single character.

It’s certainly lovely to look at, and being that there are ex-Lionhead developers involved, it’s almost guaranteed to be full of weird practical jokes and puns. You can check out the Kynseed Steam page now, but buying into Early Access isn’t possible yet.

I’ll admit, Blademaster: Duelist is interesting primarily as a nostalgia rush to the very specific group of PC gamers who remember Treyarch’s bizzare 1998 title Die by the Sword. But ever since I played that, I’ve been on the hunt for another game that gives you that sense of freedom and possibility in swordplay. Sword fighting in games now still relies heavily on pre-defined moves and parries rather than simulating a physical object in motion.

Blademaster replaces Die by the Sword’s weird two-handed keyboard control scheme with a more modern spin that incorporates the mouse, which controls the point of your blade. Attacks, feints, and parries are handled the same way, by moving your sword across your body appropriately.

That’s the theory, at least. Right now, Blademaster is still a rough solo project, and development has been intermittent since it showed up on Steam Greenlight. But if you squint a little, you can almost see Arya’s sword lessons with Syrio Forel starting to take shape.

In Other Waters casts you as an AI guiding a biologist on an alien ocean as she searches for her missing dive partner. Some of the standard exploration beats are present: you’ll explore a world, sampling and categorizing alien life you encounter, and rebuild your base camp.

But the big departure In Other Waters makes is its point of view. Instead of looking at the world through human eyes, you’re experiencing and reacting to it as an AI, absorbing necessary information through sensors and compass headings which are presented on a lovely minimalist interface.

It’s being designed by Gareth Damian Martin, who has a background in games journalism but is currently studying experimental fiction and digital literature, and his game looks like a grand experiment in nonconventional storytelling. He’s currently running a Kickstarter for In Other Waters, which has ten more days to hit its goal.

By Pixel Shade, no due date

Humans seem to have an innate urge to categorize things with names, and we tend to assume that’s normal. But if you think about it, why would our pets do that? Do cats and dogs have any concept of the idea that the people around them aren’t also cats and dogs?

In Unsung, you’re a cat living in a world populated by anthroporphized animals. Pigs, badgers, bears – everyone else, really – are people, and you’re a standard-issue cat. The game is set in a lovingly-illustrated 2D open world, and developers Pixel Shade say it’s a Scandanavian fable with an ambitious story and tight controls.

By Wormwood Studios, no due date 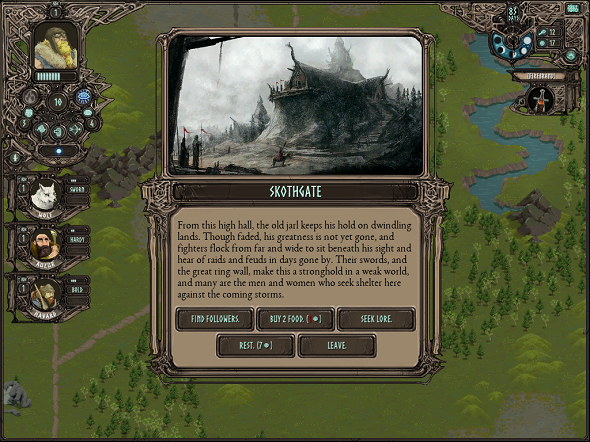 Last but not least is Fallen Gods, a procedurally-generated adventure that takes its inspiration from the Lone Wolf series of Choose Your Own Adventure-style books and the single-player board game Barbarian Prince of the 1980s. The idea here is to recreate some of the magic those early attempts at interactive role-playing achieved through creative writing and evocative art.

While Fallen Gods certainly takes has the DNA of established works clearly visible in its design, the developers want these to be inspirations rather than guidelines for their game. “Rather, like Tolkien’s own setting, it is drawn from the old lore and poured into a new glass, hopefully yielding something familiar but also strange,” they write in their announcement blog post for Fallen Gods.

Worldbuilding has changed a lot in the last 30 years, and it’ll be fascinating to see how this more classically-inspired approach to it turns out.

That’s it for this week. Got any favorites you want to share? Post them in the comments below, and if you’re a developer and want to see your game here?Tweet about it on #ScreenshotSaturday.