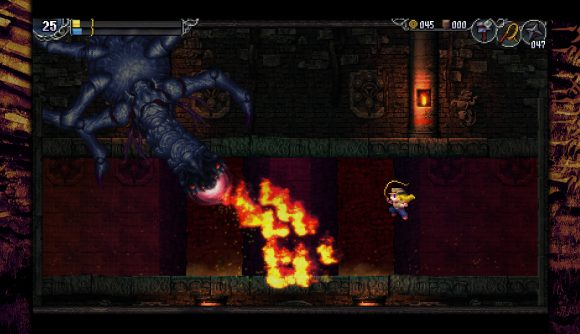 The first La-Mulana set a high bar in the genre of uncompromising Metroidvanias, and La-Mulana 2 looks like it’s going to continue the tradition of difficult platforming and puzzle-solving when it launches tomorrow.

La-Mulana 2 stars Lumisa Kosugi, the daughter of the archaeologist featured in the original game. In the new launch trailer (which you can view below), we get a peek at Lumisa’s bag of tricks, as well as several of the enemies she’ll be facing in her quest. You’ve got your standard skeletons, bats, and hobgoblins, but also large screen-filling boss creatures like dragons and a horrible fire-breathing insect of some kind.

“Wreak havoc, and the path shall be opened unto you,” a title card reads. Interesting advice, since La-Mulana has typically been about tough-as-nails old school platforming, and most of the havoc tends to be wreaked on the protagonists – and to illustrate that point, Lumisa even gets squashed by traps a couple times in the trailer.

While you’ll be able to explore the ruins of La-Mulana 2 at your own pace, you won’t be given much guidance on where to go. Developer Nigoro says that as a “seasoned explorer,” you don’t need fripperies like “tutorials” or “a long-winded sidekick” explaining how things work or where to go.

However, there are certain concessions to modernity, despite the retro aesthetic – La-Mulana 2’s levels are designed to work with today’s 16:9 displays, so you won’t be stuck with the throwback 4:3 aspect ratio of years gone by.

La-Mulana 2 launches on Steam July 30th. This might be one to check out if you’re up for a challenge. The developers estimate that it’ll take around 30 hours to finish your first playthrough.