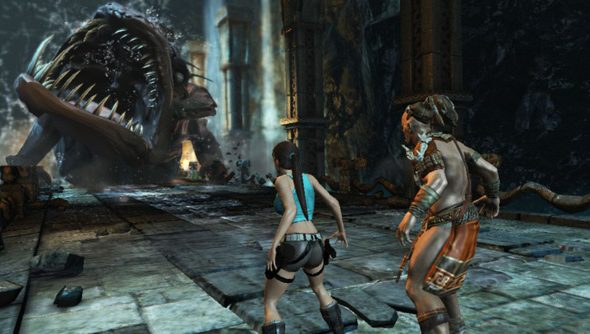 “This doesn’t mean that we’re walking away from our fans who only play on PlayStation or on PC,” said studio head Darrell Gallagher. “We have Lara Croft and the Temple of Osiris coming to those platforms this December.”

Come on, then. Let’s go see how our apology game is looking.

The ‘Lara Croft and’ games are an intriguing corner of the series where the famous animal-botherer was never rebooted. In Temple of Osiris, Lara sports her turquoise top, hot-pants and pointier polygons as if 1996 never ended.

The subset of Lara fans who played 2010’s Guardian of Light seemed unanimous in their approval of its isometric puzzling, pummelling and grappling. It felt like the sort of game lazier action RPGs could be if they had the imagination to introduce more mechanics.

The sequel looks no different – although it now supports up to four players, rather than two.

Beetlemania! Or scarab, er, fever, I guess. What did you lot make of that?