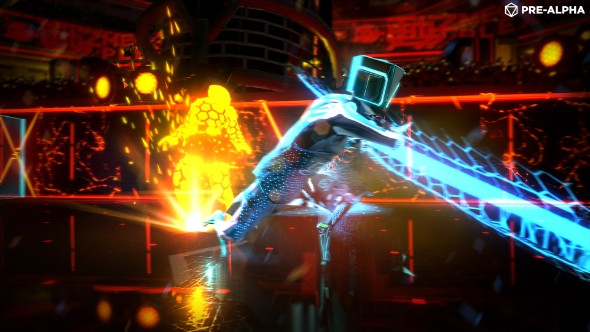 There’s a reason crumbly old-timers like myself (a recent PCGN Slack chat decided that you fall into such a category if you ever used Napster) blather on about the halcyon days of couch-based multiplayer. And that reason is simple: it really was a better time. Not better in the sense that games back then were objectively superior to what we’re served up now – if you’re genuinely trying to make that argument then you belong to a different category – but better in that it was more social, less abusive, and featured markedly fewer instances of teabagging.

This is evidenced by every recent occasion a game has popped up to temporarily revitalise that scene, either by only having local multiplayer, or actively encouraging it. Think Nidhogg, SpeedRunners, or the utterly brilliant TowerFall. All of these have had older gamers untangling their ear hair from their N64 pads so that they can rush gleefully back into the past.

Laser League wants to be the next of these. While it has online multiplayer, based on the two play sessions I’ve had with it, it’s clear that its core concern is giving players the chance to compete with, humiliate, and subsequently mock people sat within bellowing distance.

It goes down like this: two opposing teams of between two and four players maurade around a neon-lit arena attempting to survive the longest. In each round the point goes to team with the last player standing. Causes of non-survival include being hit by laser traps, projectiles and barricades ‘owned’ by the other team (i.e. in their colours) that pepper each area – either through your own incompetence or trickery on the opposing team’s part – or being directly taken down by one of their abilities.

Every class in Laser League possesses its own superpower. Sniper has a teleportation attack, Ghost can trigger momentary invulnerability, Blade has a deadly melee weapon, and so on (there are six in total). Each class then has it’s own subclass: reducing recharge times, or adding a temporary shield, for instance. There are also intermittent pickups that affect play, such as laser barricades being reversed in their movement, or paused, or swapping ownership from one team to another.

Like many of its contemporaries, where Laser League excels is in mania. Playing as a total beginner is fun enough, as both the controls and conceit are straightforward, but once skill levels creep up then the enjoyment does too. 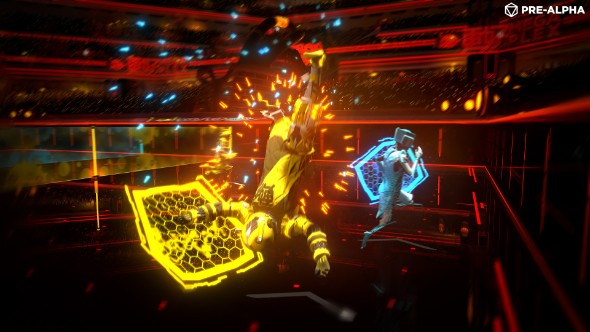 You learn when and where best to deploy your abilities, or how yours can counter those of the opposition team members. You start laying traps for less inexperienced players, or pretend to have fallen into theirs. And your aptitude at traversing the arenas (go through a wall and you’ll loop back in from the opposite side) and dodging hazards also ramps up.

This not only makes matches more satisfying, it also makes them last longer. And when they last longer, they get more manic. The speed and intensity of the environmental hazards increases, steadily quickening up and up and up until you feel like you’re in the bullet hell version of a techno rave. 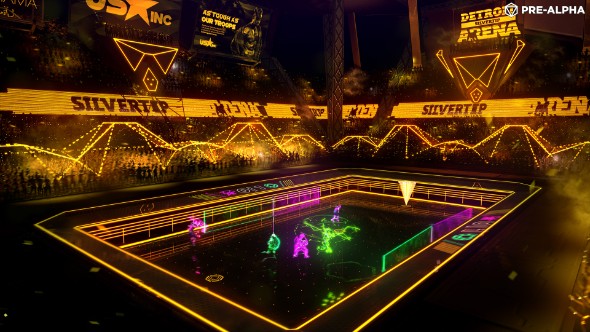 Whether Laser League can join the ranks of the multiplayer greats – either locally or online – will depend on various ingredients, including release timing, community, luck, and quality. The first two are somewhat controllable, and the latter seems in good hands, certainly at this pre-alpha stage of development (two closed betas are planned during August, before an Early Access release in September).

In the form of OlliOlli and its sequel, Roll7 have a track record for delivering on fast-paced, satisfying-to-control, more-manic-the-better-you-get-at-them games, and Laser League is already rewarding, responsive, and gunning for that ‘easy to learn, difficult to master’ sweet spot. 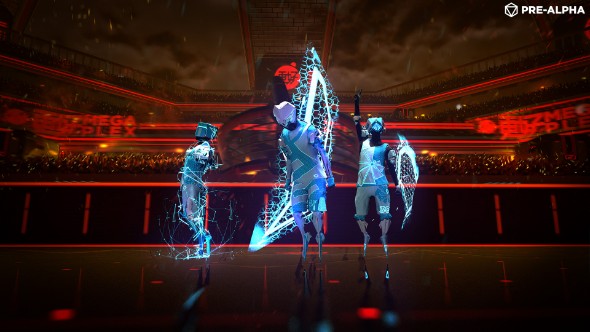 There’s balancing work to be done – some class abilities still feel more useful than others, despite the tweaks made to the game since E3 – and certainly a question to be asked as to whether there’s the scope for creativity and player freedom that something like Rocket League relies upon.

But given that Gladiators isn’t on TV any more, The Running Man is 30 years old in November, and real-life is currently unable to get video replays right, let alone allow us to inhabit holographic avatars and hit each other with swords, Laser League seems a good bet for getting your futuristic (violent) sporting fix.