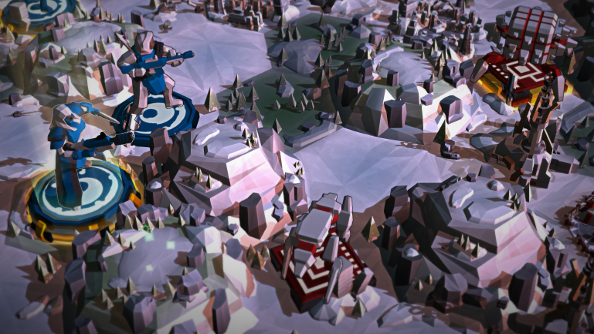 This week, we’re checking out post-apocalyptic turn-based romp, Last Days of Old Earth, which broke out of Early Access this week. 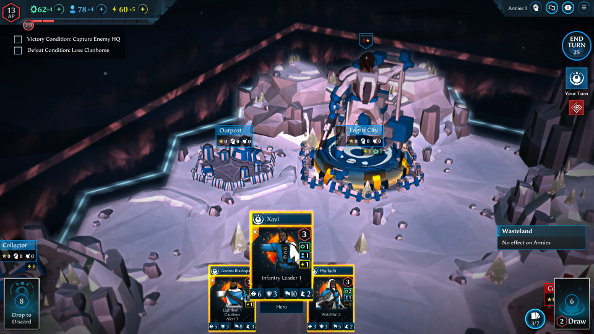 It’s the end of days and the sun is dying, putting air conditioner and sunscreen manufacturers out of business. The one place that isn’t a frozen wasteland full of the detritus of human civilization is the equator, which is where the last vestiges of humanity are heading. Unfortunately, there’s a lot of unpleasant weather and killer robots standing in their way.

Last Days of Old Earth is a medley of strategy game styles. It’s a digital board game, complete with dice rolls and decks of cards; half a 4X game, focusing on exploration and extermination; and there’s tactical combat between armies to boot. There’s even the whiff of a wargame about it, with army effectiveness being tied to supplies.

As either the Skywatchers or the Automata, the humans and machines respectively, you’ll scrap over frosty maps, attempting to wipe out the other groups of struggling survivors and merciless machines. It’s a fast-paced affair where things like empire management and the economy are largely abstracted. You can plonk down outposts and collectors to extend your supply range and generate resources, but the real focus is on managing and fighting marauding armies. 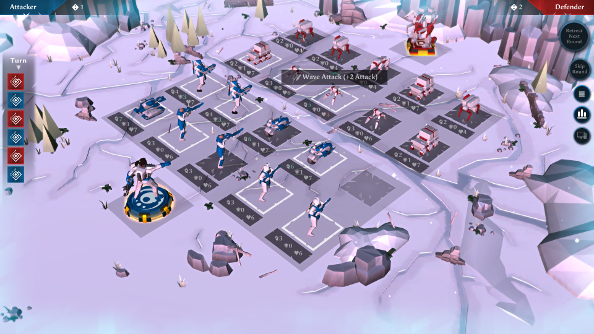 Turns begin with players and AI competing over initiative with dice rolls. Get the initiative and you’ll get to start your turn first, with a greater number of action points that can be spent on drawing new unit cards, building armies, and moving them. It’s not entirely random, however. The chance to win the roll is greatly increased by adding more dice to the pool. This comes at a cost, though. Just before you roll, you can spend some of your resources – population, materials and energy – to increase your number of dice.

Getting that edge over your opponents through initiative is important, but those resources are also needed for building up your forces, so you’ll have to weigh up your desire to give yourself a better chance of winning the roll with your military ambitions.

Units can be garrisoned, defending outposts and your HQ, but if you want them to go wandering, hunting for choice targets, you’ll need to put them in an army commanded by a hero. Not only do they give bonuses to their troops, they’re also the only way you’ll be able to construct new buildings. They don’t like getting their hands dirty, however, so they chill behind their minions during battles, fleeing – or at least attempting to flee – if their force is defeated. 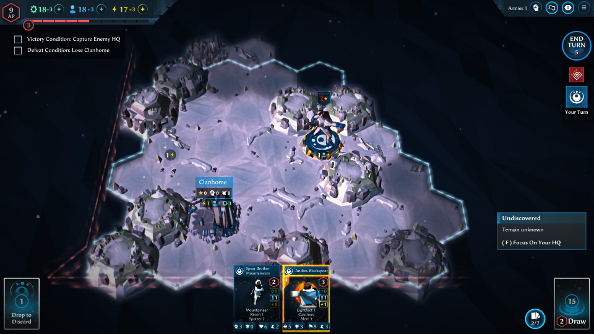 When armies collide, the action switches to a grid, with each unit getting a square where they’ll remain until the end of the fight. Armies can be arranged into front and back lines, with the ones at the back assisting by buffing their more offensive comrades. Damage is determined by dice rolls, as is defence, so there’s always a bit of luck involved. But more dice can be tossed into the pool through buffs, while failed rolls can be transformed into successful ones by spending a hero’s limited fate points.

Alongside the skirmish and multiplayer modes sits the story campaign, which breaks the game up into bite-sized missions on bespoke maps. Though they range in challenge, the pace and size of the maps ensures that you’ll be able to make decent progress quickly, so it’s perfect if you’ve only got an hour to spare but a strategy itch to scratch.

Our ‘The World in Wargaming’ series is created in association with Slitherine. Last Days of Old Earth is out now on Steam.