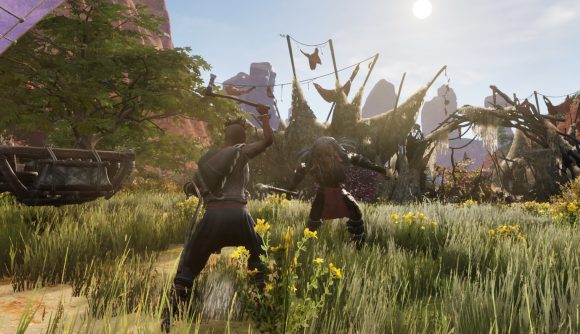 Last Oasis may feature a post-apocalyptic setting with a nordic theme, but the origins of the survival MMO’s development are more medieval. The team over at game developer Donkey Crew came together creating Mount & Blade: Warband‘s CRPG mod, which expands the game’s multiplayer by weaving in an RPG-like levelling system. It’s only natural, then, that the team have applied what they’ve learnt from working on the mod to the upcoming PC game.

“We took many of the elements that we learnt there and applied them here,” project lead Florian Hofreither tells PCGN. “A lot of the territory warfare that we implemented in our mock back then, you can see here as well.

While Mount & Blade: Warband has been kind to the team, Hofreither goes on to explain that Donkey Crew reckoned it was time for something new. “I would say it is by far the biggest influence on the game,” he explains. “But, we want to go away from this medieval style and try something new and fresh.

“We wanted to go somewhere a little bit of a wacky direction while still maintaining some seriousness. So it’s a weird combination of influences, I would say.”

Another one of Last Oasis’s selling points is its one-on-one combat. While several survival games feature bonking foes over the head until they perish, Last Oasis will have directional attacks and parrying. While elements of that come from Mount & Blade, Hofreither explains that the team took some notes from Dark Souls when it came to the weaponry itself. 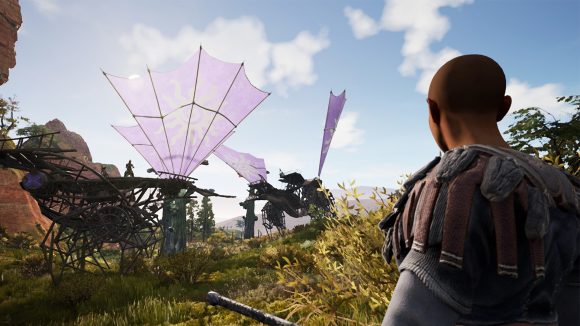 “Coming from a Warband background, there is a similar system here – that was a large inspiration. We also had others like the Dark Souls series,” he explains. “[It] doesn’t have a manual blocking system like this, but still has very interesting weapons and weapon types.

“That is something that we want to add to this type of genre as well, which is to have weapons that really can feel and act quite differently from one another.”

When you’re not getting into scraps with other players, you’ll be doing the usual foraging and construction you’ve come to know from survival games.

What we’re personally excited for, however, is the giant wooden mechs you’ll be able to craft and ride around. They make a large part of the game’s charm and can be used to ferry supplies to traders or to ransack other players for their goods.

Last Oasis’s trading system is inspired by EVE Online, which certainly explains the need to balance a huge payoff with the risk of running into pirates.

If this sounds like your kind of thing, Last Oasis launches into early access on Steam March 26. If you’re looking for something to tide you over until then, our best MMO games on PC list feature is right here.