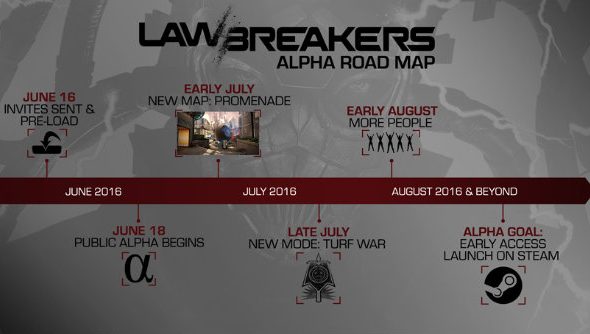 Cliff Bleszinski has laid out the new content and alpha roadmap for LawBreakers, Boss Key’s gymnastic hero shooter, starting with a closed alpha this weekend, June 18.

The closed alpha will get a new map and mode during July, and more people will be let in some time in August. Following that, Boss Key will put LawBreakers on Steam Early Access later this year.

“While we’ve given people a glimpse of the game at various events over the last year of development, this weekend is the first time we’ll begin really showing LawBreakers off publicly,” said Bleszinski.

“I can’t wait for everyone to see the results of all the blood, sweat and tears our development team has poured into this project so far. And it doesn’t stop here; we’ve got a lot more content we’re working on that we’ll continue to roll out during the alpha, Early Access and beyond, collaborating with the community to shape and improve the game.”

The new mode to be added during the alpha, ‘Turf War’, is a new take on capture-and-hold, with players flying in from above, skirting around the sides of the map, and generally being a massive nuisance.

The new map, ‘Promenade’, is based map, based on Third Street in sunny Santa Monica, Calif. The Promenade map was revealed in a new trailer during E3.

Players can sign up for the chance to be part of the public alpha tests on Steam at www.lawbreakers.com.