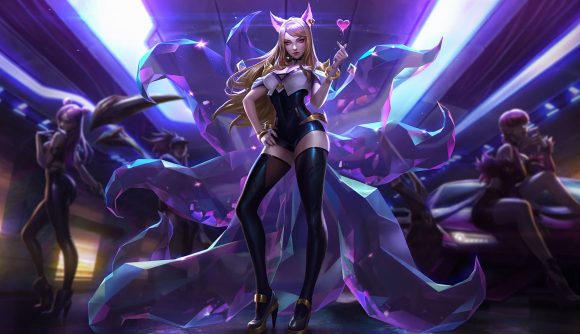 Buckle up, Ahri and Kayle fans – the two League of Legends Champions are in for some key balance changes with the MOBA game’s next update, LoL patch 10.18. Developer Riot Games has detailed some “light mechanics upgrades” in store for the Champs, which in essence should “amount to very small buffs” – but will help create some “better gameplay”.

As outlined by lead gameplay designer Mark Yetter on Twitter, the impending changes – which the studio’s “aiming to get […] into the 10.18 patch” – reach across each of the Champs’ ability rosters, targeting three apiece. For Ahri, Yetter says the goals are: “More flexibility and control of her movement speed to open up new small combos and outplays” and “more incentive and heal reward for trading with Champions”.

An attached changelist (which you can see below) shows The Nine-Tailed Fox’s Passive, Q, and W are in for some alterations. Most notably, the Passive will get a name change, from Vastayan Grace to Essence Theft, and its ‘Innate’ has been swapped out, removing its movement speed bonus and adding in a nifty new effect instead.

Going forward, the ability will work as follows: “Whenever Ahri hits an enemy with one of her abilities, she gains a charge of Essence Theft, and can gain up to three charges per ability cast. Upon reaching nine charges, her next ability that hits an enemy Champion heals her for 30/60/90/180 (based on level) (+25% AP)”, which, he adds, “is one large heal instead of the per-hit heal on live”.

We have some light mechanics upgrades coming to PBE for Ahri and Kayle. Aiming to get these into the 10.18 patch.

Both should amount to very small buffs, but focused on creating better gameplay primarily.

As for her Q, Orb of Deception, its heal effect will be removed as of patch 10.18, and her W, Fox-Fire, is getting cooldown and mana cost nerfs – though it’ll get some new features, too. The ability will deal 200% damage to minions at less than 20% health and grant a burst of (decaying) movement speed for a minute-and-a-half, too. These changes are now up for testing on the PBE.

For Kayle, on the other hand, the goal is a little lighter touch: “More active laning where trading with the enemy laner is a more available option over pure passive play”. Her Q (Radiant Blast) will no longer refund mana on Champion hits and her W (Celestial Blessing) will cost a little more mana: 90-130 rather than 70-110.

Kayle Goals:
-More active laning where trading with the enemy laner is a more available option over pure passive play

As for Kayle’s E, Starfire Spellblade, the ability’s getting some neat buffs. Its cooldown will go down to six seconds from eight, its missile speed will more than double to 5,000 from 2,000, and its mana cost will now cost the low, low price of absolute nothing, down from 50-70. Sweet.

Given these changes will be up for testing on the PBE for another couple of weeks, it’s possible we could see these get adjusted slightly before they hit the live game. Keep checking back on the LoL patch 10.18 notes to keep up-to-date, and also take a peek at our LoL tier list, which has all you need to know about the best League of Legends Champions to play in each role right now.