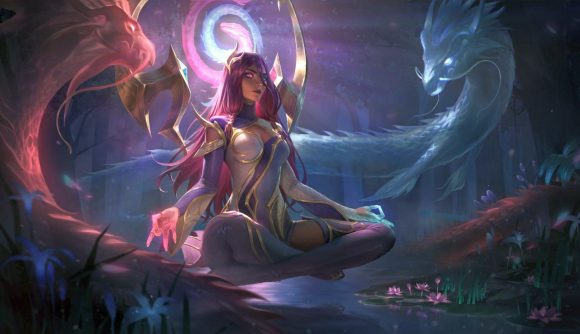 League of Legends patch 11.21 is just around the corner, with the incoming update due to bring a batch of new Dragonmancer skins, balance changes, and more to the live battlegrounds next week. Riot Games has now announced that another, significant update coming with the patch is the removal of the MOBA game’s cross-team chat feature, /All Chat.

“In patch 11.21, we’re disabling /All Chat in matchmade queues,” the studio announces in a blog post, with the reason behind this being the reported increase in verbal abuse this year. “While /All Chat can be the source of fun social interaction between teams, as well as some good-hearted banter, right now negative interactions outweigh the positives,” the developer explains. “From what we’ve been seeing, All Chat’s really heavy on negative interactions and doesn’t have that much positive at this point, unfortunately,” game director Andrei ‘RiotMeddler’ van Roon further explains on Reddit.

It’s worth noting that this is just a temporary removal for now. The studio says it’ll be evaluating the impact of /All Chat being switched off on rates of penalties and reports of verbal abuse, and look at surveys and direct feedback from the community, too.

Further to this, van Roon adds on Twitter that the span of this testing should be across “a couple of patches,” at which point Riot will take the temperature of the community’s feeling on the subject. The director also outlines some possible outcomes of this testing, which include: “keeping the change, reverting it entirely, keeping it in regions positive on it and reverting elsewhere, [or] changing which queues it applies to”.

A few more all chat test details:
– Plan is to test for a couple of patches, then survey player opinion
– Potential responses then include keeping the change, reverting it entirely, keeping it in regions positive on it and reverting elsewhere, changing which queues it applies to

It’s additionally worth clarifying that it’s specifically – and only – the /All Chat feature that’s being disabled in patch 11.21. The opposing team you’re facing down on the Rift will still see and hear your team’s emotes and champion mastery, unless you’ve got the latter muted, “as well as CTRL+1/2/3/4 spam”. League’s “End of Game chat will still be cross-team,” the blog adds, and allies will still have the ability to coordinate with each other in team chat following the changes.

Riot acknowledges that toxicity does also crop up in team chat, but it explains that the benefits of this feature are much higher given its importance in helping teams to coordinate their strategies with each other. “We know this sucks for those of you who just want to compliment your lane opponent’s skin, or ask for a dance party in Baron pit,” Riot says. “But we believe the trade-off is worth it to cut down on the growing negativity /All Chat has been creating in your games.”

For the full rundown of changes coming with League of Legends patch 11.21 next week based on what’s on the PBE right now, head to the link in the intro above. The update is due to hit live servers on October 20, so expect to see this change arrive then.