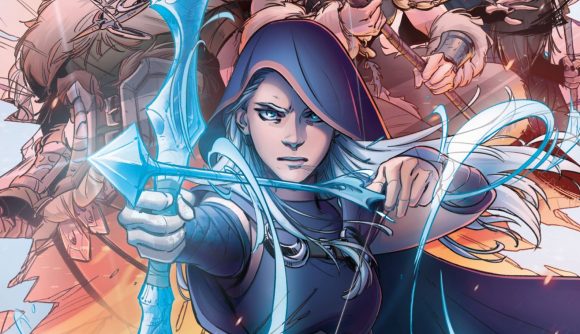 Giants of their respective industries, Marvel Studios and Riot Games are collaborating to turn League of Legends into a comic book. The first book in series, titled League of Legends: Ashe: Warmother, will go on sale in May.

However, if you don’t need to hold the thing in your hand, Riot and Marvel will be releasing each issue monthly online, with the first starting on December 19. It will be written by Odin Austin Shafer, with art done by Nina Vakueva, and lettering done by Cardinal Rae.

“Many fans of the Marvel Universe and comics share their interests and passion for storytelling with the gaming community,” Editor-in-Chief of Marvel, C.B. Cebulski, says in the press release. “League of Legends is one of the most well-known games in the industry, and their unique world and extensive roster of rich characters and are a perfect fit for comic books. We’re excited to partner with Riot and help build the League of Legends Universe for fans and players around the world.”

“We love comics as a way to tell stories because it gives League of Legends fans an opportunity to see the world of Runeterra and not just read about it,” said Greg Street, Head of Creative Development at Riot Games.

“We see similarities between the League of Legends Universe and the Marvel Universe, as both of them feature an array of characters with compelling and diverse backgrounds. Marvel’s success at developing a world through comics and creating great stories is industry-defining, and we’re thrilled to be working with them to bring our own stories to life.”

In League of Legends lore, Ashe is an Iceborn warrior and long ranged marksman raised in Freljord, the brutal wilds of the north were warriors and demi-gods walk the earth. The Freljord is in a civil war between three fractions, the Avarosans, the Winter’s Claw and the Frostguard. Ashe commands the Avarosan and hopes to unify the Freljord by becoming leader of her clan.

This is the first full length comic series to document the League of Legend’s universe. Both Marvel and Riot have plans to release more books in the future and say that they are focusing on fan favourites with more details to be released in the future.