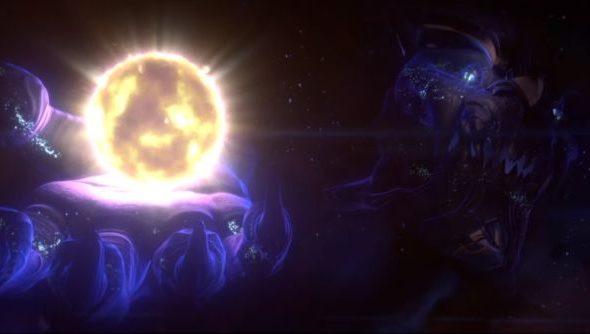 Today on Now That’s What I Call Videogames, this guy. Aurelion Sol: The Star Forger to give him his full, grandiose and appropriate title, has been revealed after a couple of weeks of “look to the stars” and “he has returned” teasing. There’s little more on the detail front, but it turns out that we were looking to the stars because he’s approximately fifty times larger than a common-or-garden sun, and he’s back to maybe kill everyone?

Before Aurelion arrives and destroys everything, try one of the best League of Legends champions.

This information and the fact that’s he’s a big ol’ arrogant ass revealed in his very own teaser trailer:

Debate isrife throughout the League community on how exactly Captain Star Destroyer is going to fit onto The Rift and what squirrels with blowpipes, police officers and one very angry bear are expected to do to take him down if his ultimate is “destroy the sun, uninstall the game, end all life on Earth.” Chances are, while he might have the approximate destructive potential of hurling a Solar System at someone’s face in the lore, his League avatar will be scaled back just a touch for balance reasons. Still: dragon from space. Rad.

He’s being designed, at least partially, by Riot’s Rabid Llama, who was behind Bard, one of the game’s most interesting support characters. I’m going to go out on a limb and guess that the sun-destroying space dragon is not also a support character, but who knows. We’ll update with more information as Riot release it.