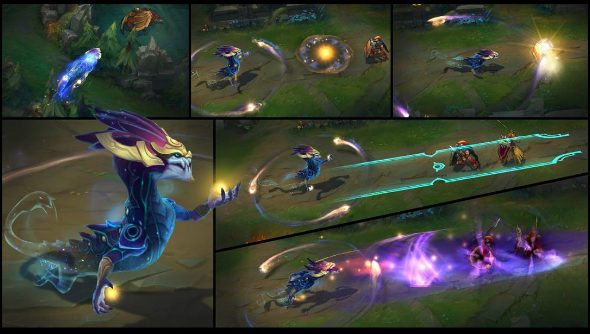 The recent past has seen the release into the wild of some startlingly exciting champions, but the Rift hasn’t seen a true mage arrive on the scene since Vel’Koz over two years ago. Many who clamour after spells of wanton destruction simply didn’t click with Azir, and discovered Ekko was, in truth, an assassin first, and mage second.

New to the lanes? Here are the best League of Legends champions for beginners.

Enter stage right an enormous space dragon to cheer our mana-hungry hearts. Said cosmic firebreather, Aurelion Sol, is Riot’s answer to the mage shortage of late, but once again this is a mage with a difference, and it’s likely that those desiring more ‘point and shoot’ powerhouses like Brand or Lux will find themselves disappointed.

However, if you open your mind to Aurelion’s wonderfully idiosyncratic kit, you’ll likely fall in love with it as well as The Star Forger himself.

Aurelion doesn’t play like any champion I’ve tried before in that his principle damage dealing ability is his passive and therefore it’s always on. As a Zilean and Lux main this was extremely disconcerting to begin with, but after adjusting to his circling stars I came to realise that success is a simple case of positioning; Aurelion players have to think about precise distances in a way that many longer-distance mages don’t need to.

In fact, Aurelion requires more considerations from his summoner than most of his peers. Map awareness is key to be able to use Comet of Legend effectively from long-distances and join the fight with a bang. It’s also hard to know when to deploy his ultimate as it doesn’t do a great deal of damage (most likely around 1000 magic damage in the late game) and most mages usually deploy the heavy hitter as a final blow.

What was pleasantly surprising is how often Aurelion survives skirmishes and wins trades simply by the nature of his always-on passive. If an enemy thinks they’ve bitten off more than they can chew and attempts to flee, a quick cast of Celestial Expansion and chase will often pick them off.

Maybe this is simply beginner’s luck as the community is still wrangling with how to counter Aurelion’s toolset – this will change as time goes on. It’s difficult to predict exactly who Aurelion will struggle against in the long-term but from my time with him I think that Leblanc, Galio, and Yasuo all pose problems in their own way. Yasuo may be able to block his stars, Leblanc can dash in and out of his orbit without the risk of a stun, and Galio, is well, Galio.

Passive – Centre of the universe 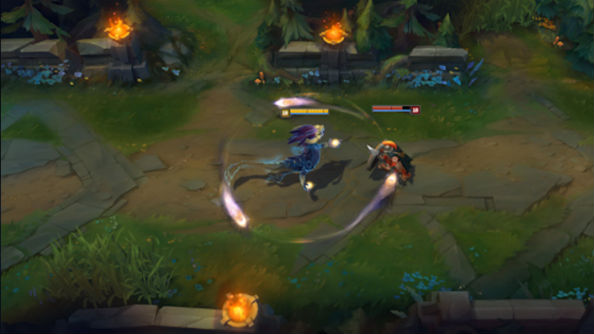 This ability is the core of The Star Forger’s kit and tied deeply to his identity as a cosmic deity. No other champions in League of Legends rely principally on their passive for damage, Aurelion Sol is a first in that regard. Stars colliding with champions is how most final blows will be dealt, making speed and counter-mobility a huge consideration for Aurelion. 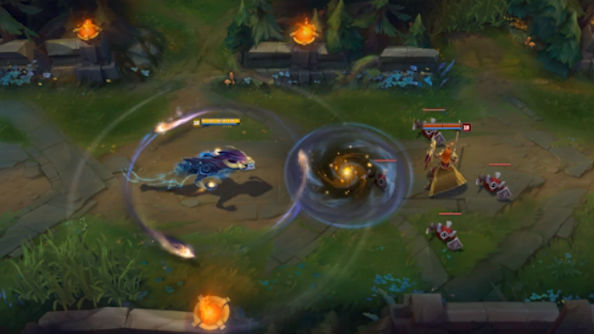 Aurelion summons a star that explodes and deals area damage when it reaches his ‘outer limit’, a boundary that is always relative to his own position. If Aurelion follows his star it will grow in size, dealing damage over a wider area, and grant him 10% movement speed.

This is a bread-and-butter wave-clear and damage-to-engage ability. Starsurge isn’t terribly fast and therefore won’t catch many other midlaners off guard in-lane, but it if used from cover or in conjunction with Aurelion’s E, he can nurture a massive explosion and then transition to dealing damage with his passive. 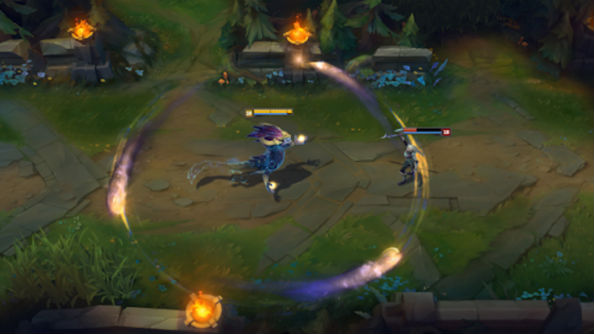 The majority of Aurelion’s damage comes from this ability as it allows him to poke from a semi-reasonable distance rather than forcing him into the enemy’s personal space. Knowing when to toggle this on, and then off again, will undoubtedly be the mark of a superb player. 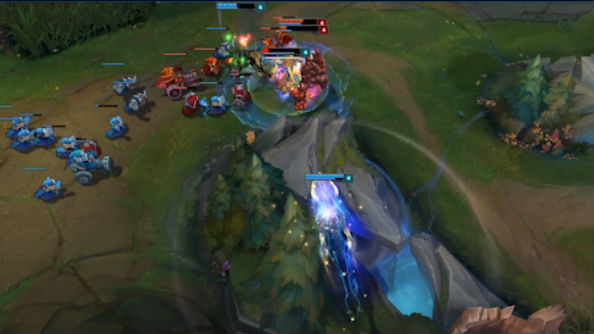 Aurelion generates ‘escape velocity’ whilst moving, when he’s generated 100, he can activate Comet of Legend which allows him to fly over walls continuously in one direction. Attacks from another champion will force him to land.

Continuously moving in one direction also causes Aurelion to gain movement peed up to 50% at maximum rank.

What an ability this is – it allows Aurelion massive mobility and vast opportunities to engage where the enemy isn’t expecting. Flying over a walls to land on a pair of unsuspecting squishies is made all the easier by the bonus movement speed which will allow Aurelion to quickly return to lane. 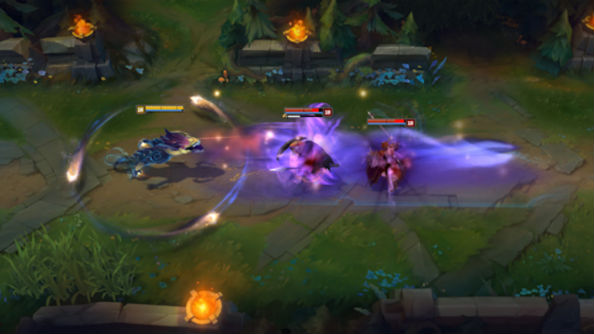 Aurelion’s ultimate fires a straight beam of starfire that deals moderate magic damage and applies a slow that decays over three seconds. Close enemies will also be knocked directly into Aurelion’s outer orbit.

From Lux, to Brand, to Vel’Koz, we’ve come to expect mage ultimates to burst open the heavens with their terrifying AP ratios and team-melting health destruction. By comparison the amount of damage Voice of Light is actually extremely modest (400 base damage at level 3) but it sets him up perfectly to cast Celestia Expansion and bring more pain. 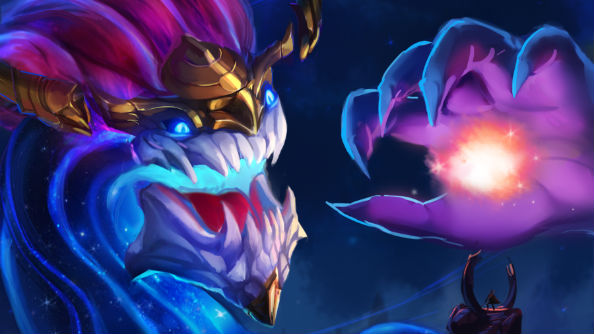 Bard’s gameplay designer, Rabid Llama was also responsible for creating Aurelion Sol, which probably comes as little surprise given his cosmic vibes and the more gentle pace of his abilities.

Of Riot’s monster champions, this has to be one of the most impressive so far, not only in that Aurelion is thematically interesting rather than just a tedious high-fantasy firebreather, but also the gracefulness of his implementation. Aurelion’s animation is captivating and he achieves much of what was out of reach for the ditched champion Ao Shin, who was abandoned partially because of the technical limitations of creating a smooth-flowing dragon. This space-serpent’s moves and turns are utterly deightful, and whilst he might not posses the formiddable length Chinese dragon, the effect is much the same.

As for his lore, very little is known about The Star Forger yet other than this short extract:

“Aurelion Sol once graced the vast emptiness of the cosmos with celestial wonders of his own devising. Now, he is forced to wield his awesome power at the behest of a space-faring empire that tricked him into servitude. Desiring a return to his star-forging ways, Aurelion Sol will drag the very stars from the sky, if he must, in order to regain his freedom.”

His teaser also suggested that he is worshipped and feared as a god on many worlds, regardless of his current state of servitude. More on this later. 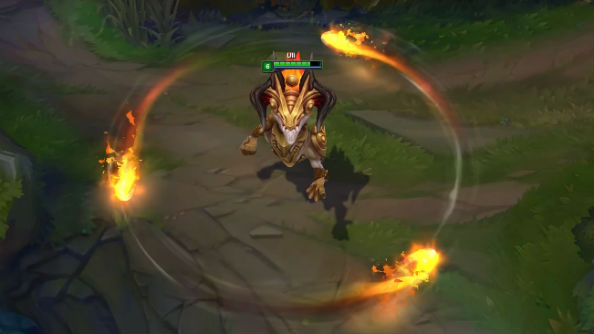 Leave your lane – Aurelion isn’t hyper-mobile like Kalista or Leblanc, but he does have global reach through the use of his E. Don’t waste grand opporunities to help allies in other lanes and gain a vital kills advantage with a well-timed gank.

Kensch it up – According to his champion reveal Aurelion’s stars continue to orbit after he’s been devoured by Tahm Kensch. Walk in to a teamfight inside his mouth and let The RIver King tank damage whilst you bring the pain. If this interaction isn’t subsequently nerfed out of existence, then the pair could easily form a late-game powerhouse.

Comet ino Surge – When surprising enemies by leaping over walls, try to cast Starsurge as early as possible so that it reach its maximum circumference when it eventually explodes. The bigger it gets, the less likely you’ll miss out on that vital first hit on your opponents.

Ult early – It might be tempting to hold onto your ult into enemies are in range, but with the exception of Comet of Legend, which can be easily interrupted, Aurelion has very few ways to close gaps on enemies. Connecting with your ult is a great way to achieve a massive slow which can then lead to a heavy engagment with Celestial Expansion.

One dragon to another – Comet of Legend is a great ability for checking on the status of objectives like Dragon. If you’re planning on heading toward another lane then it might make sense to hop over the Dragon Pit or Rift Herald whilst you’re at it. Beware however, as these objectives are likely to be warded and may warn your opponents of your approach. 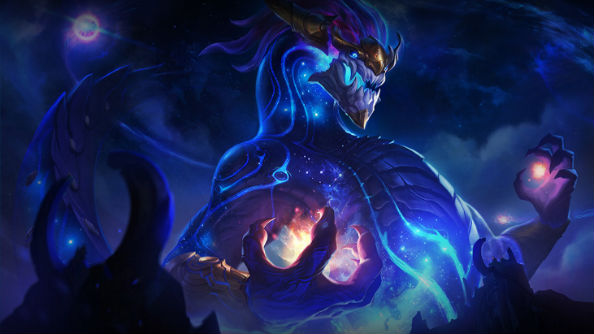 Zhonya’s Hourglass – On Aurelion this is a complete no-brainer. The 100 AP boost is extremely healthy, but it’s the item’s unique passive which makes it perfectly suited to The Star Forger’s kit. Activating Zhonya’s Hourglass will make Aurelion completely invulnerable for 1.5 seconds without halting Centre of the Universe or Celestial Expansion. Using this he can dive into the middle of fights and continue to deal area of effect damage whilst remaining untouchable.

Rylai’s Crystal Scepter – As a mid-range mage, this dragon is going to be in the thick of things during most engagements, and the health Rylai’s Crystal Scepter provides is vital for keeping him alive. More importantly, the single-target slow of this item’s passive applies to Centre of the Universe, allowing Aurelion to more effectively kite and chase down fleeing prey.

Liandry’s Torment – This item has great synergy with the above as its magic-damage-over-time passive is doubled against movement impaired targets. All Aurelion has to do is tag his enemy with Centre of the Universe, Starsurge, or Voice of Light and they suffer damage equal to 4% of their health per second. In a busy teamfight where his passive passes through multiple team members, this could be a game-changing amount of health erosion.

Luden’s Ekko – Aurelion is a mobile threat as he’s able to quickly transition between lanes using Comet of Legend. The 10% movement speed on Luden’s Ekko will make these ganks even more terrifying by cutting down the time it takes for Aurelion to jump from mid straight onto an unsuspecting enemy carry.

Quicksilver sash – Aurelion’s burst damage isn’t the best, so it’s important that he builds plenty of ultility to survive long fights and catch his opponents off guard. Most other mages will attempt to either escape the range of Celestial Expansion or root The Star Forger to keep their distance: the instant debuff-removal of Quicksilver Sash can turn their supposedly simple escape into a nightmare by keeping Aurelion on the move and able to position them within his stars’ orbit.

Aurelion Sol is currently live on the PBE servers and will be headed to a Rift near you in the coming weeks. Can’t wait that long? You can sign up to become a beta tester for Riot.

That’s our guide to the latest League of Legends champion -Aurelion Sol. Have any tips for playing him yourself, or tactics fordefeating him should he pop up on the opposing team? Let us know in the comments below.