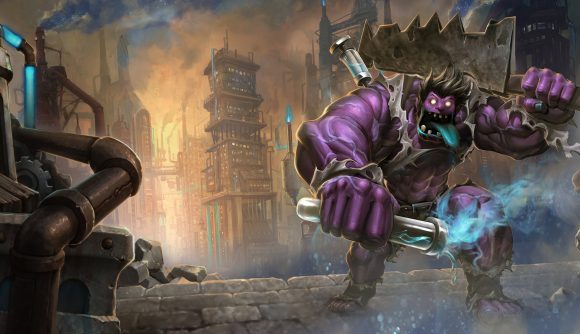 Riot has been busily revamping some of League of Legends’ older champs, and the company has announced the next one to go under the knife: it’s Dr. Mundo, the humongous purple mutant with the medical degree who hurls cleavers at his enemies and soaks up damage like it’s a gentle spring rain. A new post explains some of the rework team’s initial thoughts on the Mundo rework – what they like about him, what they want to change – which is due to be ready in 2021.

The post is titled ‘Kicking Off Dr. Mundo’s VGU,’ and as you might expect, it reflects a very early period in the champ’s rework process. In it, some of the Riot developers working on Mundo provide their insights into Mundo’s strengths and weaknesses.

As one of League’s early champions, Mundo’s visuals are looking pretty clunky – especially by the modern standards set by more current League of Legends champs. “Honestly, one of the main reasons we wanted to update Dr. Mundo is because of how dated his visuals have become,” the post reads. “Mundo sticks out like a sore thumb in the current roster of champions.”

But the team also thinks it’s time to take a look at Mundo’s kit and look for places where his gameplay can be improved.

“Our main goals are to 1) give opponents more counterplay options against Mundo, 2) increase Mundo’s gameplay variance beyond landing cleavers, and 3) bring Mundo into the modern era of League without sacrificing his overall simplicity,” writes gameplay designer Glenn Anderson.

Dr. Mundo’s big ‘thing’ is to be able to more or less ignore incoming damage, and the team says they want to keep that aspect of him intact – although how that works mechanically may be changed. Some early experiments included giving Mundo one point of additional max health every time he got hit and having Mundo convert his defensive stats into health – but both ideas were discarded when the team found them encouraging bad decisions.

Riot’s team is also looking at Dr. Mundo’s lore, toying with the idea that perhaps he isn’t even a doctor at all, just a huge freak who is deluded into thinking he’s a doctor.

The team is still at the early concept stage of the Mundo rework, and are encouraging players to give them feedback on how they think NüMundo should emerge from the process.