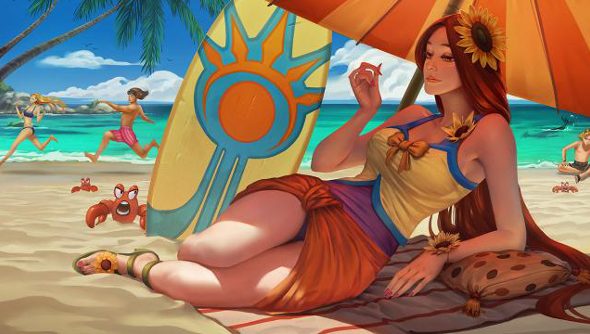 It’s easy to forget, up here in frigid Scotland, but it’s summer in the southern hemisphere, and Riot’s got its eyes on the beach. To celebrate Australia Day and New Zealand’s Waitangi Day, League of Legends players will be able to unlock a slew of rewards, including legendary skins, IP boosts and even an artificial reef, by winning games during Ocean Week.

Between the 23rd and 30th, points contributed by wins will unlock rewards for every participant. Here’s everything you’ll be able to earn:

30,000: 8 additional champions will be unlocked for the rest of Ocean Week, so that’s 20 free champions on rotation.

130,000: The Scuba Gragas, Sailor Gangplank, Frozen Shen and Angler Jax skins will reappear in the store through February 8th.

175,000: When purchasing a mystery gift, you’ll have double the chances of getting a legendary skin.

275,000: This one’s a bit bonkers. If the goal is reached, Riot will create an artificial reef themed around a community-voted champion (Fizz, Nami or Nautalis) for the enjoyment of sea beasties. League of Legends is a big deal in the ocean. If you contribute at least three points to the goal, then your summoner name will be etched into a statue which will chill out at the bottom of the sea.

Fancy being immortalised beneath the waves?