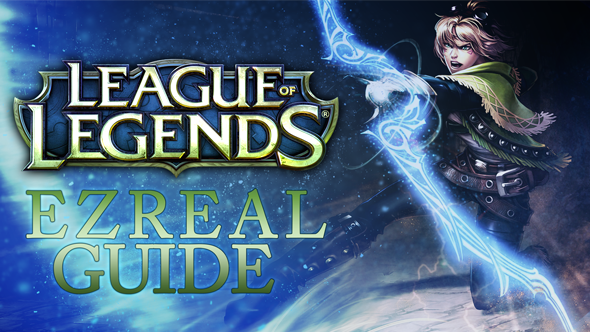 There’s no markman quite like Ezreal. He sits in his own little category off to the side, as a marksman who weaves abilities between moving and attacking, almost ducking and diving around a fight to get the best angles.

For more tried and tested picks, check out the best League of Legends champions for beginners.

His abilities, build paths, and style, then, don’t really fit what you might expect out of a marksman. We’ll be covering everything you need to know, from his general style to Ezreal counters. So here’s your guide to Ezreal, The Prodigal Explorer, and we’ll start with his abilities. 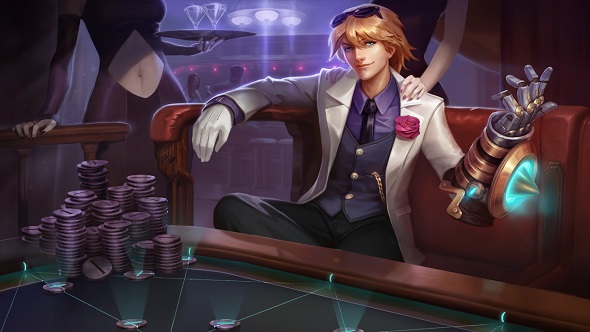 With every ability hit, Ezreal gets a touch more attack speed, stacking up to five times. It’s pretty simple, really. Don’t focus too heavily on watching if this is always stacked – if you’re playing Ezreal right, it will be.

This is Ezreal’s primary damaging ability, and what makes him unique: he fires a small projectile in a line at a long range, stopping at the first enemy hit. Alright, it doesn’t sound unique, but it does two things if it hits. The first is that it reduces all of his ability cooldowns by 1.5 seconds, while the second is that it applies on-hit effects. If he’s hitting Mystic Shot, that means, it has an effective cooldown of only three seconds at level five, making it spammable and effective at utilising on-hit effects of items like Triforce or Blade of the Ruined King.

The magic damage but ultimately disappointing equivalent to Mystic Shot, Essence Flux has a greatly decreased range but hits all champions in a line, not stopping. If used on allied heroes, it also gives them a small buff to their attack speed. Think of this ability as a good way to stack Ezreal’s passive, and get 5 stacks more easily.

Ezreal’s a slippery little marksman. Arcane Shift allows him to blink a short distance: over walls, behind you, or just away. In the hands of a skilled player, it’s the perfect repositioning tool, and should be used as such. To back away if you need to retreat, to almost strafe around the opponent and get the right angles to hit Mystic Shot, or to chase an opponent. While it has a long cooldown, 19 seconds at level one, remember that Mystic Shot decreases that every time it hits.

One of League of Legends’ few global abilities, Trueshot Barrage involves Ezreal charging for a second, before firing a large projectile in a target direction, travelling until it leaves the map. It doesn’t do a staggering amount of damage, as any target hit will decrease damage subsequent targets take by 10%, down to 30%, meaning minion waves can decrease its effectiveness greatly. The damage is still not to be sniffed at though, and it’s often a reliable way of fully stacking Rising Spell Force.

Ezreal’s lane presence relies upon the threat of Mystic Shot – the opportunity for a lot of poke damage whenever the opponent moves out of position – and his slipperiness with Arcane Shift. To use his abilities effectively, utilise Mystic Shot regularly but efficiently – don’t waste too much mana – and Arcane Shift sparingly, if ever. Max Mystic Shot first, followed by Arcane Shift, and finally Essence Flux, putting a point in Trueshot Barrage at levels 6, 11, and 16. 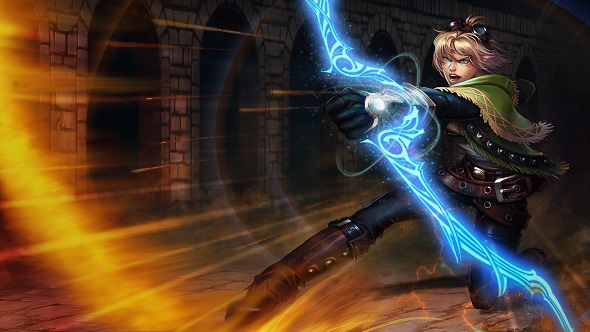 So you know how Ezreal’s abilities work, but do you really know how to use them?

In the laning phase, the only ability you should be using is Mystic Shot, bar a few exceptions we’ll get onto. It’s best for poking down enemies – especially supports who need to step to the side of the minion waves to have full effectiveness like Karma or Thresh – but opportunities will be few and far between if they’re competent at hiding behind the minion wave.

Over time you’ll get a feel for the ability’s range and width: use that to get some hits at a distance and slip the skillshot between minions.

Try not to use the ability to last hit minions if you can help it – you’ll easily run low on mana if you spam Mystic Shot early. Sometimes it’s required, especially if the opponent abuses Ezreal’s poor waveclear to gain an advantage in lane, but do your best to push back without Mystic Shot.

Arcane Shift is your ‘Get out of jail free’ card. Only use it when you’re in a pickle or desperately need to avoid a skillshot. If the enemy knows the ability is on cooldown, chances are they’ll punish you for it with some aggression. Using the ability directly aggressively is often a bad idea.

Instead, use it to strafe alongside the enemy, rather than get in their face. Move parallel, not right at them. Keeping that distance means that, despite the ability being on cooldown, you should be safe from heavy engage.

This advice carries on later on in the game: use Arcane Shift sparingly, and if you’re in a position where you can push forward with it aggressively, strafe.

But then his style changes up, as you’ll have some of his key items. The main objective is landing Mystic Shot as much as possible, on the backline if you can (again, learning the range and width of the ability will help you weave it between targets), but now you’ll have the mana pool to throw out Essence Flux regularly, and Trueshot Barrage will often give you a high attack speed with Rising Spell Force. If you do need to just auto-attack, you’ll at least have a high attack speed.

As a somewhat silly and inefficient trick: Ezreal can hit himself with Essence Flux. Check the video above for an example, but the key is to use Essence Flux, then Arcane Shift into it, and you’ll get the attack speed buff Essence Flux gives to allies. 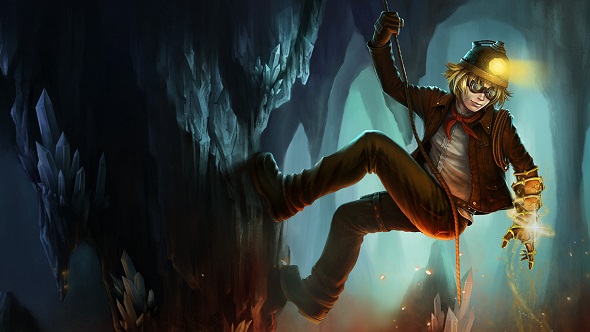 Unlike most marksmen in League of Legends, the most effective Ezreal build path changes on a near regular basis. This guide is being written as of patch 7.2, but we’ll briefly mention the older builds. 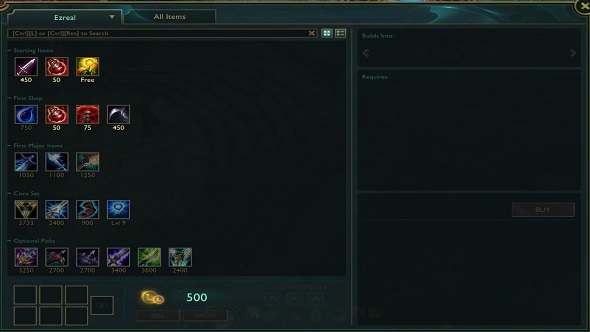 There’s one key item: Manamune. Building out of Tear of the Goddess, it’s the staple for Ezreal, as it synergises well with his spellcaster-like kit and its upgrade, Muramana, helps his Mystic Shot do a chunk of extra damage.

Because of how Tear of the Goddess needs a long time to stack up and become useful, it’s the first item you need to buy, as early as possible. Because it’s cheap, some players will wait out the laning phase to pick up a Cull alongside it. That depends on when you can find an opportunity to go back without losing experience and gold, though.

Follow that up with Sheen, then upgrade that into a Triforce. Sometimes, the favoured build shifts to upgrading the Sheen into an Iceborn Gauntlet instead: this is the famous “Blue Build”, as it involved Ezreal buying almost entirely blue items. Inventive title, I know.

Get the Triforce first, and follow it up with upgrading the Tear of the Goddess to Manamune. It’s around here that you should look to buy and upgrade a shiny pair of boots – rather than Berserker’s Greaves like most marksmen, Ezreal needs Ionian Boots of Lucidity, the cooldown reduction aiding his damage greatly as he relies on spells. Ezreal’s core items are finished about here, and it’s time to move on to the more flexible slots.

Blade of the Ruined King, while put down by many, synergises with Ezreal’s Mystic Shot as it applies on-hit effects. If you’re up against a number of health-stacking enemies, it’s a nice item to pick up.

Otherwise, he’s got the same options as any other marksman: Mortal Reminder or Lord Dominik’s Regards against armor-stacking opponents (although as Ezreal does mixed damage, these aren’t the best choice, and should only be taken specifically against enemies with lots of armor), Maw of Malmortius if you need magic resist against some burst damage, Mercurial Scimitar against stuns or roots, and finally Guardian Angel as a defensive item. 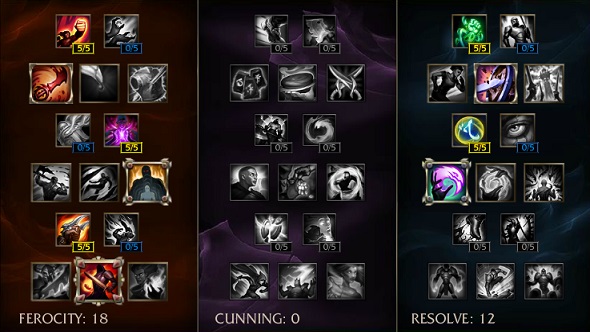 With regards to Masteries, check above for a screenshot on what to take. Some talents rely on personal preference – taking points in Cunning rather than Resolve to solve some of Ezreal’s mana troubles is a possibility, although leaves you a little weaker.

Sometimes, it’s best to change up the Keystone Mastery at the bottom layer too. If you’re with a support who lacks the ability to keep your health up, or can’t shield you from much harm, take Warlord’s Bloodlust instead. As Mystic Shot applies on-hit effects, Fervor of Battle is typically the best choice, but Warlord’s Bloodlust gives you solid way of keeping your health topped up in lane. 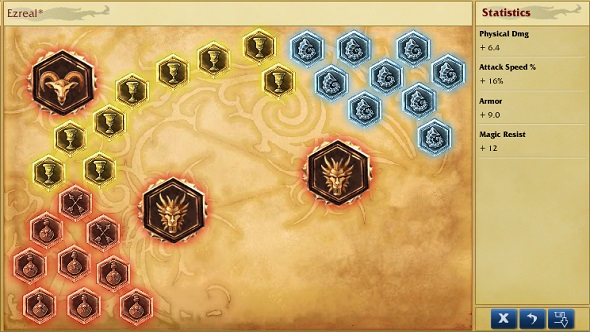 For Runes, there’s nothing too out of the ordinary, and you can see above what’s best to take. It’s the usual: attack damage marks, magic resist glyphs, armor seals, and attack speed quintessences. Some people take a few scaling magic resist glyphs – with the prevalence of mage supports like Brand, Zyra, and Malzahar, that’s not a risk you want to be taking. 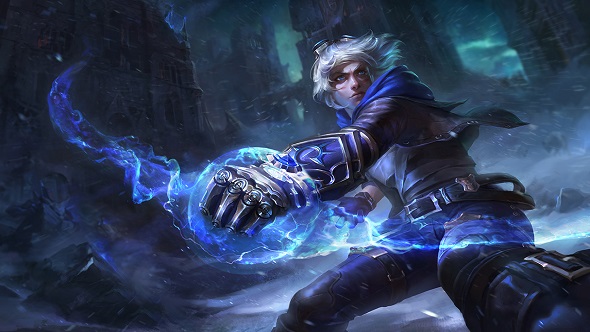 There’s one thing that Ezreal relies on to get his damage across: Mystic Shot. It’s a line skillshot that, while long range, stops at the first enemy hit, and really interrupts his flow if missed. When playing as Ezreal, it’s key to be able to weave those in, between moving and auto-attacking. Ezreal counters, therefore, interrupt that.

There’s a few ways to do that, the first being: get in his face as a tank. Get right up in there. When he Phase Shifts away, just keep on following. He has a hard time shredding tanks and no crowd control to inflict, so you’ll do well to keep yourself up close and personal. Olaf is a good shout here, being League of Legends’ primary marksman killer, or Alistar if you’re looking to shut him down from a support role.

The other method of dealing with Ezreal is with some fancy footwork. It sounds obvious, but his primary damaging abilities are all skillshots: he’s gotta be lining them up to hit you, rather than just clicking on you. With some unpredictable movement, it’s possible to avoid his Mystic Shot, and prevent him from decreasing his cooldowns with it.

If you’re looking for Ezreal counters in lane, the key is to punish his poor wave clear. He’s one of the worst marksmen at clearing out waves of minions, so pick up a marksman or support who can dominate the laning phase. Caitlyn is the most typical choice, but Miss Fortune will also typically be able to push him out of lane. From support, pick someone aggressive whose presence controls the lane: Zyra and Karma are two great choices. While a good Thresh is typically also dominant in lane, Ezreal can punish him for stepping away from minions to look for a hook with Mystic Shot. It’s not the best choice.

Finally: build armor. Lots of it. While he does do some magic damage, it’s primarily physical, and Ezreal has a hard time getting through that as the armor penetration items aren’t the best on him.

To round off, here’s some tips for getting the best out of The Prodigal Explorer, and to round out your Ezreal Guide:

That’s what we’ve got for you, but please leave your Ezreal tips in the comments below!