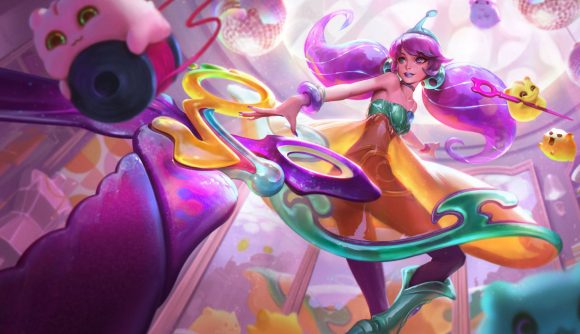 With the League of Legends patch 11.15 testing cycle in full swing, the devs are starting to give us a peek at what they’ve got in store in the way of balance changes with the update. Alongside a pretty hearty list of buffs coming with 11.15, Riot has also got a pretty lengthy set of nerfs headed some champions’ way, with Gwen, Sylas, Aurelion Sol, and six others getting tuned down.

“Lot of pro-facing shakeups for playoffs in here, plus a couple of high performing solo queue champions,” current lead game designer on the Summoner’s Rift team Jeevun Sidhu says on Twitter, sharing an early patch preview. In the list we’ve got Gwen – who has been a bit of a powerhouse since she hit the MOBA game’s professional play earlier this year, with a pretty ferocious pick/ban rate of 82.4 across all pro regions since the Summer Split kicked off, as Games of Legends’ stats reflect (via Dot Esports).

Also of note is mage champ Aurelion Sol, which Sidhu adds some context on. “Aurelion Sol’s elite win rate in the last two patches has been 57.3% and 57.4%. Both of those have been the highest win rates of any champion in elite MMR. He doesn’t have the highest ‘one trick’ rate or comparable metric that would suggest his low play rate is a cause.”

While it’s not clear just yet what nerfs Riot has in store for the champ – or any of the others in the list – just yet, it sounds like Aurelion Sol’s could be relatively significant given the point Sidhu’s highlighted about his win rates of late. Elsewhere in the list, we’ve got Annie, Kayle (mid), Sylas, Thresh, Viego (lane), Wukong, and Irelia, who received an extensive list of balance changes in the most recent patch, 11.14.

For context: Aurelion Sol's Elite win rate in the last 2 patches has been 57.3% and 57.4%. Both of those have been the highest win rates of any champion in Elite MMR.

He doesn't have the highest "1 trick" rate or comparable metric that would suggest his low play rate is a cause.

There’s good news for ten champions, though, with a chonky list of ten getting buffed this update. Here’s the rundown: Blitzcrank, Caitlyn, Cassiopeia, Kennen, Mordekaiser, Nidalee, Rell, Shyvana, Syndra, and Xayah. Plus, Rumble and the recently reworked Dr Mundo are getting some adjustments – though, again, it’s not clear what these, or the champion buffs, will be right now.

Riot often posts the full rundown of changes it’s got planned within a day or so of the early patch preview going live, at which point the tweaks roll onto the PBE, so keep an eye on our League of Legends patch 11.15 notes for the full picture of what’s coming next week.