The teaser video relating to the next League of Legends champion had everyone chomping at the bit last week to find out more about the mystery assassin. Good news, the wait is over: champion number 129 has finally entered the public testing grounds. Say hello to Jhin, The Virtuoso.

Just getting started? The best League of Legends champions for beginners are what you need.

Jhin is a ranged marksman who thrives when he’s picking off targets from a distance or dealing massive single target damage at medium range. Riot describes their masked menace as League of Legends’ ‘slowest marksman yet’, and after spending a day in the artisan’s presence on the Public Beta Environment, they’re not wrong. This flamboyant gunslinger packs a punch in single, well-placed shots instead of a spraying death.

So let us beat about the bush no longer and delve straight into the nitty gritty of how Jhin works.

Having spent some happy times getting pummeled on The Rift, I feel I’ve come to understand Jhin and the people that will love him – i.e awful human beings. His kit combines the most annoying things about Caitlyn (high damage, range) and Teemo (hidden explosives), which makes him the ideal tool for those seeking to indulge surprise-attack sadism.

His attack damage focus makes him a great choice in the bottom lane where a tanky support can soak damage and mark enemies for him to root with Deadly Flourish. It’s also possible that we’ll see a synergy with long-range supports like Lux who can mark enemies for a distance.

However, Jhin could also be a viable mid lane pick, as his traps provide protection from ganks and he can easily retreat from slower mages. The extra experience gained from the solo lane will also allow him to reach level six quickly and roam to deploy Curtain Call against the top and bottom lanes from the safety of the river. Clearly he’s a situational pick in mid as against the likes of Ahri, who’s hyper-mobile, he’s going to struggle a great deal.

Using his ultimate from the flank, rather than straight down the lane has several advantages: you can’t take damage, you have vision of the enemy, and it’s harder for them to simply jump out of range at the periphery of his firing arc. Trust me when I say that the sight of Jhin’s sniper vision originating from a distant point in the fog of war summons a feeling of dread.

It’s also quickly become apparent how utterly helpless Jihn is when people get up in his grill. Tristana or Lucian can easily escape sticky situations and Jinx can hope to burst her enemies down, but Jhin’s lack of built-in escapes and low rate of fire make him easy pickings when he’s over extended and reloading. In short: don’t do it unless you’ve set an array of traps that would make Elmer Fudd proud.

Kindred, Ekko, Azir and Rek’Sai have all brought intricate mechanics to the Rift in the past 18 months so it’s unsurprising that the community has been thirsting for a more straightforward champion. Jhin’s raison d’être is somewhat easier to grasp than all the above in spite of his three passives and inordinately complicated number crunching. 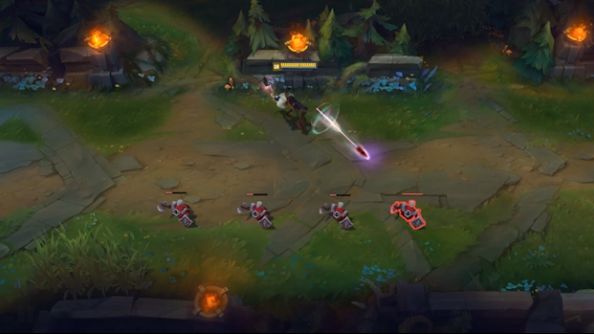 Jhin’s gun has four chambers, every fourth shot is a guaranteed crit and does extra damage based on the enemy’s maximum health. Crits also give Jhin a burst of movement speed, while bonus attack speed doesn’t make him fire faster, but does increase his attack damage.

Fourth shots are great for harassing opponents in lane with massive damage. The bonus speed should then allow him to chase whilst he’s reloading his gun. 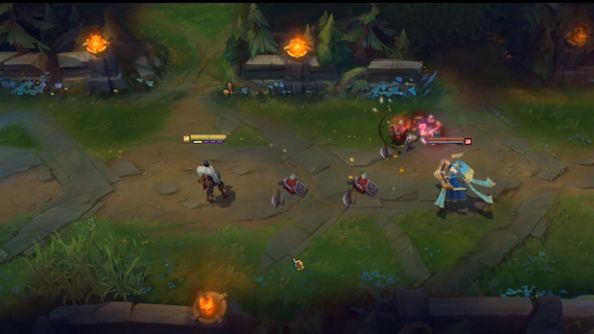 It’s not going to win awards for health erosion any time soon, but Dancing Grenade can easily secure last hits on minions from a distance with the possibility of minor damage to an enemy champion. 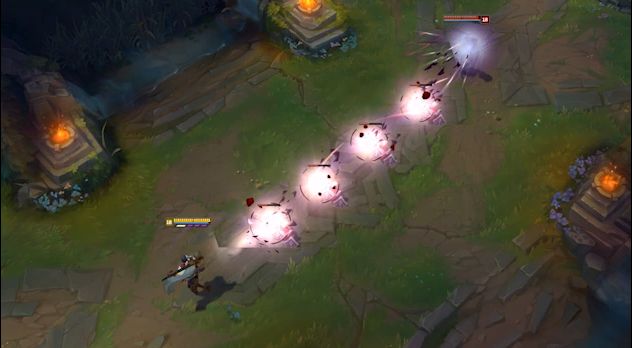 Jhin fires a narrow, long-range projectile that damages every minion it passes through and stops at the first champion hit. If they are marked, they are temporarily rooted.

This is Jihn’s bread and butter ability. Not only does it deal moderate damage from a distance, but holding enemies in place gives him time to reload, or reach the fourth bullet in his chamber. This is especially useful when playing Jihn as an ADC in bot lane where the support can mark an enemy before he fires off Deadly Flourish to initiate a fight. 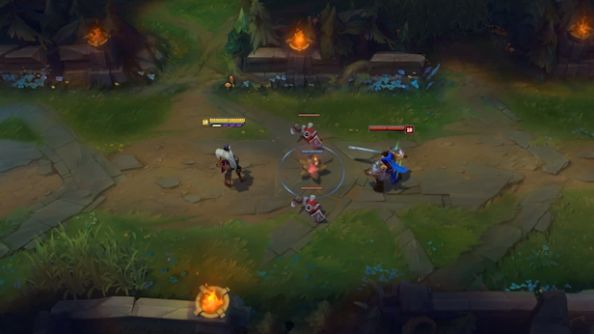 Jhin places a trap that becomes invisible. Enemies passing over the trap activate it, slowing all inside its perimeter. After a short delay it explodes, doing magic damage.

Traps are evil, Jihn has traps, ergo Jihn is evil. Clever placement of these fatal flowers is what will distinguish a great player from a good one. Not only can they be used in flanking brush to ward against ganks, but they can also be thrown behind enemies mid-team-fight to slow, and possibly kill an ailing foe. 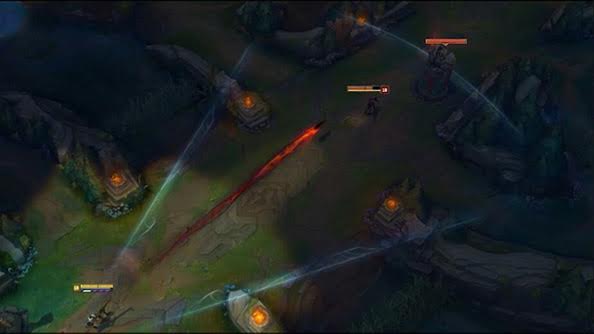 Jhin sets himself up for four extremely long range shots which can be fired within a limited arc. Inside this range all marked champions (the same mark that activates the stun on his W) are visible. Each shot goes through minions and stops at the first champion hit. The last shot deals increased damage and is a guaranteed critical hit.

As with Captive Audience, timing is everything when activating Curtain Call. When enemies are up close it’s near-useless as it effectively reduces Jihn’s attack speed and roots him to the spot. This ultimate’s greatest strength is it’s intimidating range, which allows players to kill swiftly from the shadows are a safe distance down the lane. 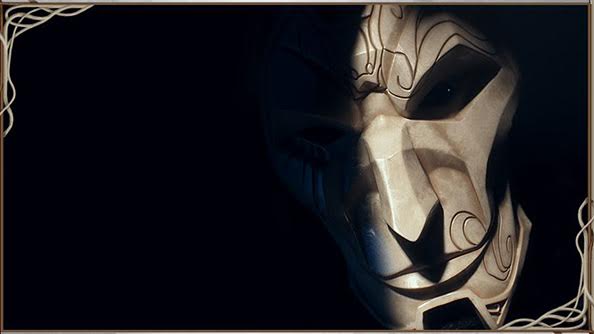 Our new champion’s background remains a mystery for now but his persona is that of a deadly artisan. Every kill is a masterpiece, every bullet conveys a piece of his soul. The concept is compelling, but the implementation may leave some feeling ambivalent.

The Virtuoso’s visual style has been well thematically tailored – enemies slain by his hand blossom into deadly flowers and his semi-mechanical, masked aesthetic is undoubtedly Riot’s ode to The Phantom of the Opera. He’s easily one of the most distinctive characters in the League of Legends roster, yet I still find myself wishing that Riot had turned up the volume on Jhin’s personality a few notches. For all his flourishes and flowers, Jhin regularly exudes an air of nonchalance instead of manic energy. I mostly put this down to his voice acting which seeks to project the soft but sinister tones of a sophisticated psychopath, but rather than channeling the superb Sandy Cohen of BioShock fame, the result instead reads ‘Hannibal Lecter with artistic aspirations’.

There are a few oddities of Jihn’s kit that are worth noting, the first of which are his attack damage and attack speed scaling. Jhin’s attack speed scales with level and nothing else. Items that say ‘40% bonus attack speed’ on the label won’t increase his rate of fire at all. By level 18 he averages around one attack per second, which is a measly frequency compared to his peers.

By way of compensation, Jihn gains attack damage through items which grant bonuses to critical strike chance and attack speed. This translates to insane base attack damage scores that go well over five hundred, something utterly unthinkable for most other ADCs. Crits derived from monumental base scores like this are utterly devastating, and I’ve played matches where every single shot is dealing a minimum of 1000 damage.

The next is thing it took me a while to realise is that Curtain Call actually refunds a portion of the cooldown time if all its shots aren’t fired at a rate of 10% per unfired shot. It’s tempting to fire off every bullet, even if your prey escapes – don’t. This also opens up the possibility of using Curtain call simply as an intimidation tactic against potential ganks or plays for objectives.

Finally, something that was entirely overlooked in Jhin’s instruction manual is his inability to cast his Q, W, E, or R when he’s down to his last bullet. Once that all-important crit is sat in the chamber he’s both at his most dangerous and his most vulnerable, so don’t hang around too long trying to sneak in that extra damage, you might not live to regret it. 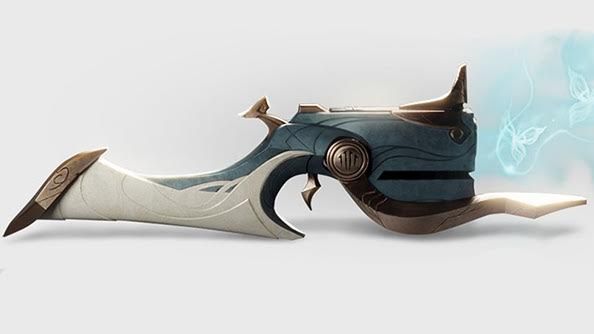 From my short time playing Jihn I’ve discovered a few items that are non-negotiable when constructing his kit and others which should be avoided like the plague.

The considerable attack speed and critical strike chance bonuses (leading to increased AD) might seem tempting but don’t be fooled, this isn’t a match for Jhin. Runaan’s Hurricane works a treat on champions like Jinx because of the superb auto-attack range of her rockets and normal attack speed scaling, which equates to lots of extra bolts. No matter how much you try to hasten Jihn’s attacks, he still fires relatively slowly and his auto attack range is poor, so the extra projectiles fired by this item will be minimal. You’re better off focusing on single target damage items.

Harassing in lane with your fourth bullet is key, and this item can help you do just that. When the Firecannon becomes energised you gain 35% bonus range and deal extra magic damage on the next bonus attack. The deal is sweetened further by 30% bonus attack speed and critical strike chance.

The armor penetration offered by Youmuu’s Ghostblade always looks tempting, but Jihn’s rate of fire is slow which minimises its impact. There’s also little use for this item’s active, which temporarily grants movement speed and attack speed; Jihn has plenty of tools for attacking from afar and he gains bonus attack speed from critical hits. Any attack speed gained might translate into bonus attack damage because of his passive but will, in actuality, fail to increase attacks per second.

Not the obvious choice on Jhin, but what this item lacks in straight-up AD it makes up with its passive, Spellblade. After using any ability the next basic attack deals 200% attack damage. Add that tremendous multiplier to a shot that’s already a critical hit and you’re looking at inflicting in excess of 1500 damage in one shot at level 18.

Mechanically speaking, I must admit that Jhin is terrific fun to play. Each smoking shot from his gun is deeply, deeply satisfying, as is holding back the final round for a meaty crit on the nearest squishy.

In the long term I worry that The Virtuoso has less to offer players in the late game than other League of Legends hyper-carries like Jinx, whose teamfight damage is formidable, or more utility-based champions like Kalista or Sivir, but who knows how his identity will evolve as time goes by. No one could have predicted the impact of Tahm Kench’s summoner swallowing in last year’s Worlds, and it’s quite possible that pros and amateurs alike could find a game-changing way to utilise Jhin’s abilities.

That’s our guide to the latest League of Legends champion – Jhin, the Virtuoso. Have any tips for playing him yourself, or tactics for defeating him should he pop up on the opposing team? Let us know in the comments below.