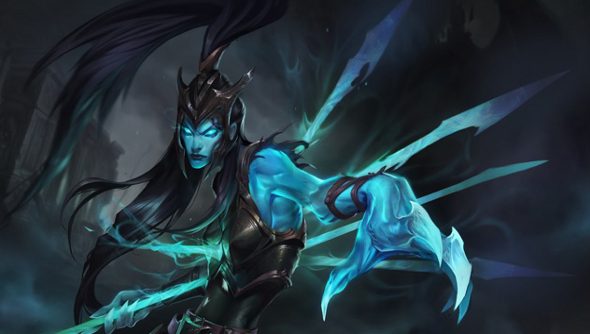 Riot’s got another unfriendly looking champion that it’s throwing into the big ol’ League of Legends melting pot: Kalista, the Spear of Vengeance. That’s her title and her weapon, which must get a bit confusing at times. She’s a bit miffed about being murdered, so she offers to kill betrayers, but at the cost of the souls of the betrayed.

Kalista is not the sort of champion you want to solo queue with. Kalista’s niche is cooperation.

“As designers, we are constantly trying to help players succeed,” Riot explains. “Building scenarios that overwhelm or confuse players is simple, laying the foundations for success is the challenge. As such, Kalista highlights the cooperative end-state in which she and her ally are most likely to succeed and offers a tool kit to enable players to reach that state.”

She’s a marksman that can use her spear to create a pact between herself and an ally, soul-binding them. She’s at her best when soul-bound, getting bonus damage thanks to her passive: soul-marked. When she and her ally strike an enemy within one second of each other, they deal bonus magic damage.

Does she sound like your cup of spectral tea?