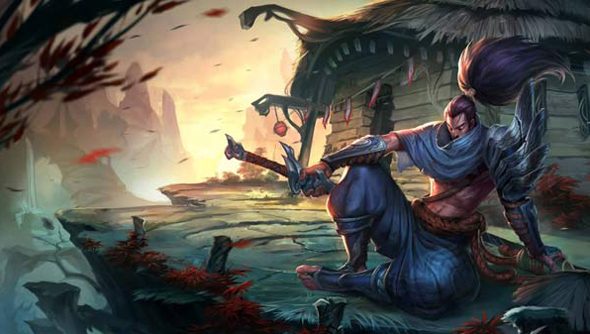 League of Legends’ crowd-control might not be as extreme as Dota 2’s, but that doesn’t mean that learning to side-step an incoming skillshot isn’t an important skill. After all, it’s not that uncommon to get caught just out of position and then see the entire game fall apart around you. Thankfully, one player has put together a tool to help you step up your footwork.

League of Dodging is a browser game that has you play as Yasuo in a top-down version of Summoner’s Rift’s middle lane. As you traverse the area around the river, dozens of Morgana’s dark binding spell effects start flying in from all corners of the screen. It’s up to you to last as long as you can, ranking up the longer you survive.

To help out, Yasuo gets to use his signature Wind Wall ability, blocking all incoming projectiles for a limited time. On top of that, you’ve got access to the Summoner Spell flash, letting you jump out of the way in an instant if you need to.

It’s a pretty simple affair, but I found it fun enough in the few minutes I was playing around with it before writing this article. Whether it’s actually made me any better at dodging skill-shots remains to be seen, although I think it’s fair to say that you’re unlikely to find yourself in the situation that League of Dodging presents outside of a Doom Bots of Doom game.

Read more: Check out the League of Legends patch 9.2 notes

Elsewhere in League of Legends, the next patch heralds the arrival of new champion Sylas the Unshackled. The mage is Demacia’s first supervillain, and comes kitted out with the ability to steal ultimates away from other characters.