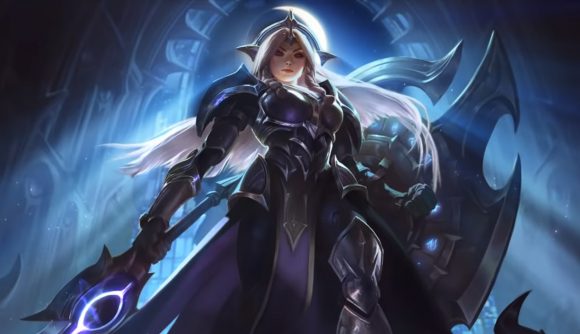 Leona is blocking out both sun and moon for a set of new League of Legends skins, with variants for both the Solar Eclipse and the Lunar Eclipse. Both will hit the store tomorrow, November 27 at 11:00 PST / 14:00 EST / 19:00 GMT.

A mysterious new teaser video which you can see below teases the skins with dramatic voiceover. “You arrived as shadows. Quiet. Shifting. Insidious. Corrupting all you touched, all that your hollow eyes could see. Tell me, witch; can a shadow survive my light? Tell me; would you dare face me in the day, once I’ve scorched you from the night?”

It’s all very mysterious, but maybe unnecessarily so. As with most League skins, you can see the new additions in all their glory on YouTube. Clips of Lunar Eclipse Leona can be seen here, and Solar Eclipse Leona is here. They’re both part of a new skin concept called variants, which Riot detailed on the forums earlier this month. Basically, their animations are the same, but they have unique second forms, splash screens, and voiceover lines.

You can pick up each skin for 1820 RP, or grab the pair for for 2821 RP. The full discount will apply even if you buy them separately.

Coven Camille and Lissandra were also the subjects of recent teasers, and they’ll hit the store tomorrow, too. The pagan skins aren’t quite so fancy, so they’ll be available at 1350 RP each.