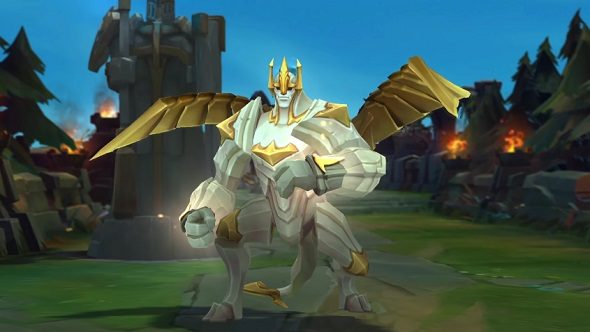 Looking significantly more regal than he used to, Galio has had quite the makeover at the stonemason’s, ahead of his kit rework in patch 7.6. Now a dashing defender of the weak instead of a wizened old gargoyle, Riot have released a small teaser for Galio, hinting at his new abilities.

The most striking thing to notice is the huge change in art style from the old Galio to this reworked version. This new Galio looks like he was made to guard the Vatican, being crafted out of gold and marble as opposed than his drab old stone exterior. He’s a lot bulkier than he used to be, running around and punching foes with his massive stone arms, rather than flying around and slashing at his enemies.

While he retains his Righteous Gust, many of Galio’s new abilities are based around his beefier design, with one of them having him charge into a foe, uppercutting them into the air and slamming them into the ground with a two fisted strike.

He also seems to have a new ultimate similar to Pantheon’s, where he flies up into the air and then lands at his new destination with an earth shattering punch. Unlike Pantheon, it looks to be tied to allies, with Galio flying in to save them from enemies in pursuit. However, according to lead producer of Champion updates Ryan Mireles in a post on Reddit, they haven’t completely got rid of Galio’s old ultimate, with the taunt effect now being linked to his W.

Along with glimpses at his gameplay changes, we also got a lot at his redone skins and I have to say, the new Gatekeeper and Commando Galio do look very cool. I can’t wait to see what special animations he gets for each version.

Galio’s character and art style has certainly changed, and it looks like his role in a team may have changed slightly too. You may have to alter your playstyle if you play this glittering golem, but we’ll know for sure when patch 7.6 releases tomorrow.