The League of Legends champion pool has increased once again as Jhin, long teased through the DeadEye series of videos and images, has been revealed. He’s a slow, strategy-heavy marksman – League’s damage dealers – with an obsession on beauty and a fascination with death. While he won’t be getting anywhere quickly, literally the slowest moving character Riot have ever designed within his class, his unique way of using stats makes him an entirely new factor on the battlefield.

Jhin probably won’t be joining our cast of the best League of Legends champions for beginners, because he’s ludicrously complicated.

With One of the weirdest and wordiest passives I’ve ever read is the meat of Jhin’s character. Here’s Riot’s lengthy description:

“Jhin’s gun – Whisper – chambers four shots, the last of which always crits and applies extra damage based on a portion of his target’s missing health. After firing all four shots, Jhin takes a moment to reload.

In human English, this essentially means his attacks will never get faster or have a higher chance to crit, but instead he’ll just keep doing more and more damage. He’ll also get even faster the times when he does crit, which will be whatever his baseline chance is (as it can never be increased) as well as after every fourth shot. I will admit that upon reading this for the first time, it took several repositionings of my head, one out-loud rendition and eventually an explanation from a friend before I really got it. Expect that to mean that half the folks who pick him don’t have a clue either. 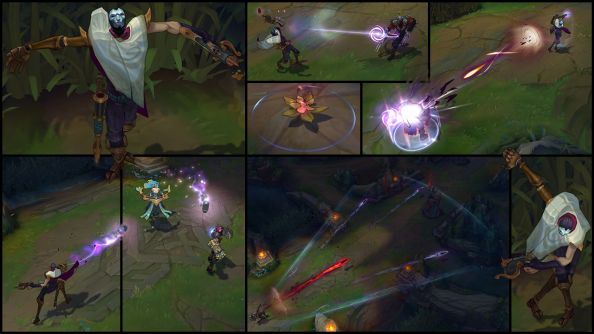 The rest of his combat repertoire involves long-range shots, more on-hit effects, traps and one bouncing grenade. The last is his last-hitting mechanism, designed to make it a bit easier for the slow-shooting, limited ammo and glacially paced Jhin to get gold early. It’s also a useful harrassment tool if it bounces to opponents, especially if it’s taken out a few minions first, upping its damage.

Meanwhile both his ultimate and W-skill involve massive long-ranged shots. The W is a line-nuke that deals damage to everything it hits up to the first champion. It has the longest range of any non-ultimate ability in the game, and slows targets that Jhin has already hit. His ult turns the man into a stationary weapons platform with a wide-arc targetting range. He fires four of these shots, with the final one doing execution damage of the same sort as his basic attacks. It’s hard to aim and vulnerable to quicker enemies, but does incredible damage if landed repeatedly.

Finally he has a set of traps he can lay down that create a large slowing area, which also come with their own passive that cause any enemy champions killed by Jhin to drop an AoE slowing flower that then explodes for damage. These are both his means of escaping bad situations and another part of his perfect strategy needed for killing, as well as just a useful disable for when it’s needed.

The aim of all this, from Riot’s side, is to create a champion with a lot of moving parts and things to keep track of, but that will feel unstoppable when they all come together. Land a trap that explodes at the right time, knocking enough minions down to low HP to kill them all with a bouncing grenade, dealing big damage to the champion. Use this time to catch up to them, launching a final shot from the chamber to do serious damage, then finish them off with a W as they try to run away. That’s just one scenario, but of many that Riot are hoping true pros will be able to pull out regularly.

It’s a dangerous piece of design, because he’ll be balanced on a knife edge. A single number too high and he’ll look totally dominant, one a few points too low and he’s useless. He has to get those kills when things are carefully planned, but they can’t come too easily. To begin with, the community won’t even know what items to build or how his numbers work out, such is his unique way of ‘interpreting’ items, so that will take experimentation. It’s going to be interesting to see what they come up with.

You can see more on Jhin on his official reveal page, and he should hit the testing environment on the public beta servers soon. Expect a release within the month, including what will probably be Riot’s longest spotlight video yet as they try to explain all this in detail.