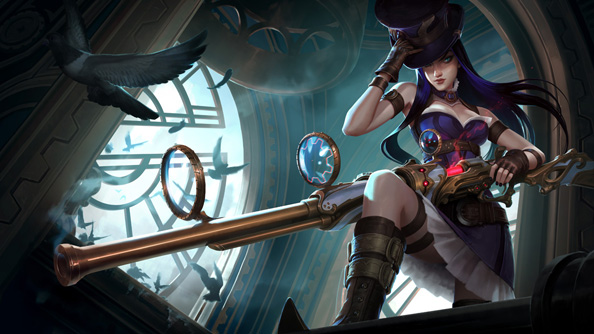 Are you a ranged attacker who sacrifices defensive power and utility in favour of dealing strong, continuous damage to individual targets? Then you’re a marksman, and you, your teammates and your opponents are all likely to be affected by what’s coming to LoL next month.

It looks like sherriff in a silly hat Caitlyn is likely to be a key beneficiary of the pre-season patch dubbed the marksman update – due shortly after the League of Legends World Championships conclude in October.

Riot associate game designer Bradford ‘CertainlyT’ Wenban writes that Caitlyn is “fun and functional”: “It’s just hard to identify a situation when she’s the right pick over other marksmen.”

While none of her abilities are likely to change substantially, Riot intend to refine her strategic identity as a siege and zone control-focused champion by fiddling with her traps, and emphasise her background as a sharpshooter by improving accuracy and range. Players will need to work on shot timing and target selection.

“You should know a person who has 30 games on Cait from one with 5,” says Wenban.

Quinn, the crossbow-equipped bird trainer, isn’t necessarily well thought of as a marksperson – but Riot see potential in the abilities that make her “pretty familiar” to marksmen specialists.

“I’ll expect her to still be a viable solo laner,” writes associate game designer David ‘Repertoir’ Capurro. “But we’re changing a few things up so that she has some purpose in a game outside of suppressing her lane opponent.”

“We threw some ideas around for him but never really settled on something we liked enough,” explains Capurro. “It’s quite possible he benefits from other pre-season changes quite well, though.”

Thanks, Reign of Gaming. Do any of you lot play marksman?