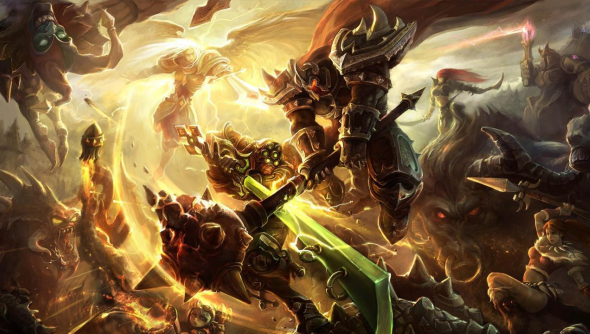 League of Legends’ 2015 preseason has begun, which means Riot are free to patch, update, and alter their MOBA. The mantra for this upcoming season’s changes is “Strategic Diversity,” say Riot.

“Our high-level philosophy is we want to offer you more paths to victory so that your in-game decisions matter just as much as the champions you pick.”

If you’ve a read through of the patch notes you’ll see how they’ve achieved this.

Patch 4.20 is the first patch of the preseason so Riot have included a lot of explanations for their changes. “In previous years,” they write, “we’ve lacked the proper systems and levers to balance different strategies against each other.

“This year, rather than trying to ‘fix’ tactical problems from the previous season, we’re instead introducing a metric tonne of changes to map-wide objectives, a complete rehaul of the jungle and jungle itemization, and a number of strategic item additions / modifications. With these new paths in place, how you strive for victory will vary with each individual game and our hope is that all of this adds up to more far more strategic diversity and experimentation in League. “

Patch 4.20 includes a lot of changes and Riot admit it’s unbalanced: “we’re expecting the game to be disrupted, imperfect, and requiring even more work over time.” They’re releasing the changes now so that players can paw over each alteration and find the balance problems in the system.

Watch this League of Legends 4.20 trailer for a handy overview of the patch:

For the full context of the changes read Riot’s preseasons patch notes what I’ve included on the next page is strictly the changes that come with patch 4.20.

Recommended items for all champions have been updated

No longer linear. Instead, stats follow the following formula:

Kalista, the Spear of Vengeance, will be released with Patch 4.20!

Updated model and textures for base, Charred, Totemic and Festive skins. Haunted Maokai has received a texture update and Goalkeeper Maokai is unchanged.

Updated VFX for base and all skins

TECHNICALLY A BUGFIX Sort of fixed a bug where Blade Waltz’ AD ratio was displaying as 1.2 when it’s actually 1.15. This is technically a bugfix because…

TEXTURES The following textures have been updated:

Inhibitor and Nexus turrets are much stronger in comparison to their previous versions. Sorry we can’t be more specific in terms of direct comparisons (lots of complicated math) – we can say the new turrets are roughly 1.5x or 2x stronger.

With every hit, the beam gains 6 heat until 120 heat is reached. When the beam switches targets, heat is reset.

Inner turrets now have regenerating shields that affect both themselves and nearby allied champions. Additionally, all allied champions within 1100 range gain a growing shield over time, scaling to a maximum of a 200 health shield.

Turret defenses have been adjusted:

Turret health has been adjusted:

Minion defensive stats have been adjusted:

Hand of Baron grants an aura that empowers nearby minions:

Hand of Baron augments your Recall with new effects:

A new crabby objective that offers a unique reward in the form of vision and a speed shrine for movement through the river.

Smiting the Krug grants Gift of Heavy Hands – stuns minions and monsters every 1st and 5th hit. Your first attack against a turret deals 50 (+15 per level) true damage but consumes this buff. Lasts 90 seconds.

Smiting the Raptor grants Razor Sharp – gives you a warning and magical sight for 10 seconds when an enemy ward spots you. Lasts 90 seconds, with 1 charge.

Smiting the Murkwolf creates a Rift Spirit – summons a Rift Spirit that watches over a portion of the jungle. Lasts 90 seconds, but that timer goes down when the spirit chases enemies.

Smiting the Gromp grants Gift of the Toadstool – attackers are poisoned for 6 (+ 6 per level) magic damage over 3 seconds. Lasts 90 seconds.

Raptors have been further re-tuned to be equal to other camps:

We’re trying to make it a little less painful to “donate” buffs to allies.

Champions gain 10% less experience for each level they are above the camp they are killing. This penalty caps at 50%.

Embarrassing Deaths in the Jungle

When you Smite and kill a large monster in the enemy jungle, the cooldown of Smite is halved, you gain +20 bonus gold, and you gain 175% increased Movement Speed decaying over 2 seconds

PASSIVE – BLASTING SMITE The cooldown of Smite is reduced by 15 seconds. Smite also deals half damage to all monsters and enemy minions near the target and stuns them for 1.5 seconds. Casting Smite on a monster restores 15% of missing health and mana.

PASSIVE – CHALLENGING SMITE Smite can be cast on enemy champions, marking them for 6 seconds. While marked, you deal 18-69 bonus true damage to them on hit, have vision of them, and reduce their damage to you by 20%.

PASSIVE – CHILLING SMITE Smite can be cast on enemy champions, dealing 28-164 true damage and reducing their movement speed by 50% for 2 seconds

Elixirs cannot be purchased before level 9

DRINK ME FOR +250 health, +15% bonus damage to turrets, and the Siege Commander buff for 3 minutes

DRINK ME FOR +40 ability power, +15 mana regeneration per 5 seconds, and the Sorcery buff for 3 minutes

DRINK ME FOR BLOODLUST!!!! +25 attack damage and the Bloodlust buff for 3 minutes

SORCERY Dealing physical damage to champions heals for +10% of the damage dealt. Scoring a kill or assist extends the duration of this Elixir by 30 seconds.

This is technically a strategic item, but we have nowhere else to put it anyway.

UNIQUE PASSIVE Valor’s Reward – Upon leveling up, restores 150 health and 200 mana over 8 seconds

UNIQUE ACTIVE Grants +60% Movement Speed to nearby allies when moving towards enemies or enemy turrets for 3 seconds. After 3 seconds, a shockwave is emitted, slowing nearby enemy champion Movement Speed by 80% for 1 second. This effect may be reactivated early to instantly release the shockwave.

REMOVEDVALORLESS No longer has the Valor aura

Multiple Ohmwreckers cannot be used on the same turret for 7.5 seconds ⇒ 8 seconds

TOTAL COST 720 gold ⇒ 750 gold (The total cost of items that build out of Chain Vest remains the same, except where noted)

The total cost of items that used to build out of Negatron Cloak remains the same, except where noted

Sword of the Occult

Sword of the Occult now starts with 5 stacks!

Sword of the Divine

Jungle items are searchable in the in-game store as “jungle”

You can now search for armour in the shop. Reconnoitre. Neighbour. We can go all day. Manoeuvre.

SIconographic Dragon Slayer counters have been added to the scoreboard