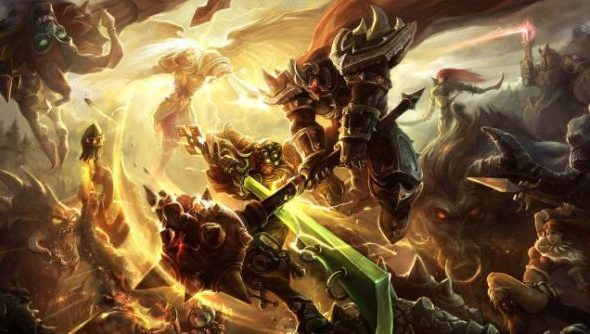 Riot has just deployed patch 5.3 to League of Legends, containing some light balance work in preparation for the much more anticipated patch 5.4, coming at a later date. The eventual goal is to remedy a removal of an in-game item, Deathfire Grasp, by replacing it with a more balance friendly item for mage assassins to use.

“We mentioned that 5.2 and 5.3 were going to be our Deathfire Grasp-removal patches,” stated Riot in the foreword. “But now that we’ve been hard at work, we realized we could use an extra cycle to build confidence.”

Deathfire Grasp was a legendary item tailored to mage/spell caster assassin roles. Not only did provide great stats, but it had an active ability that would deal a powerful nuke to the target, while also amplifying any magic damage. By patch 5.2, the item proved too powerful and troublesome, and so was removed from the game entirely.

Riot has always planned to replace it with a more balanced item, but so far have had difficulties in finding an answer. “We’ve delayed a few dudes we promised would come in 5.3,” explain Riot. “Including Veigar, Mordekaiser, and a new +120 AP item to replace the gap left in DFG’s wake. We’re aiming for 5.4 and are expecting to stick the landing (except maybe the new item, as it’s a bigger project and might take longer!).

“One thing we do agree with is that there needs to be another +120 ability power item for endgame mages, and we’re investigating that space as we speak.”

So what’s this patch really about? “Just that we’re going pretty light,” Riot reaffirmed. “With changes aimed at a few outliers in competitive and normal play (oh dear Ahri). I guess you could say this patch’s narrative is defined by what’s not in there.”

The highlights of those balance changes are few, but certainly have great effects. The summoner spell Ignite will now prevent champions from being able to recall while the debuff is on them. Farsight Orb now can drop a visible ward for 60 seconds at the designated location. Similarly, Greater Stealth Totam now holds up to two charges, up from one, and recharges every 60 seconds.

As for the champions themselves, Ahri got a nerf across the board for most of her abilities. Sona’s base states have been temporarily increased while Riot fix on a bug hotfix to rectify any unfair advantages/disadvantages caused by it. Finally Varus’s ultimate, Chain of Corruption, received a hefty width increase, making it easier to land.

Of course, these are just a selection from the entire patch – you can read the rest of the patch notes here.