Riot Games haven’t discovered the concept of scheduling yet, so yesterday they revealed about fifteen things all at once. The official notes for Patch 6.1 arrived, along with its rundown video, plus major changes to the structure of things at the professional level. Worried there might not be enough to read, they also released the details on how the next champion update would go, this time targetting Shen. Plus brand new champion Jhin was put into the newly updated beta environment for testing, meaning lots of stuff came out from datamining that. Oh, and the Korean pro-scene started up again, along with the previews for the EU and NA LCS.

The best League of Legends champions for beginners, in case you don’t have enough to read.

Start simple: patch notes. Everyone loves a good patch note and Riot’s are the best. 6.1 doesn’t bring any humongous gameplay changes, tweaking balance up and down here, nerfing someone’s guns while buffing someone else’s claws, the usual. However it does lay the groundwork for not only the start of the 2016 ranked season, but big additions to the game in the form of the new champion select mechanism. Neither hits quite yet, but will be in place before February by current estimates.

Then there was the Shen reveal, which intends to bring one of the game’s oldest champions up to the modern standard. The aim is to keep his iconic tanky nature and cross-map teleporting saves while giving him more character, a better kit and less generic moveset. Also: one of his skins got updated to be wearing crocs. So there’s that. 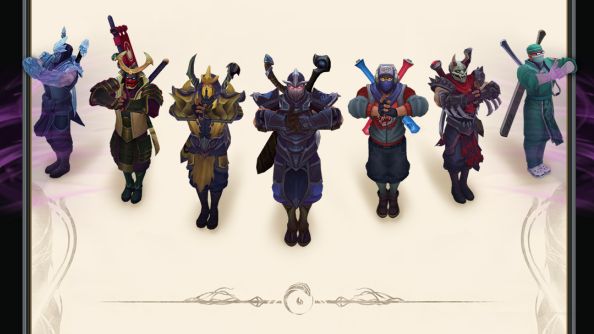 Meanwhile the Public Beta Environment was updated with a load of upcoming content, including the new champion Jhinand the meta-game crafting system that will allow players to be more directly rewarded for good play. As always, Surrender @ 20 has the best rundown of literally everything you could want to know, along with videos of new champions, skins and systems. This poston Reddit also has some more details on Hextech crafting after opening 51 boxes.

The new LoL ranked season starts on January 20th, so Riot also made a post about that. Other than the way champion select and queueing is being altered, not a tonne has changed from last year, though rewards are expected to be significantly changed come the end. Matchmaking should also be better for the elite few who are probably too busy playing their 30th game of the day to read this.

Lastly (I hope), with the new LCS season kicking off – I have a fantasy team this year despite a total lack of knowledge of players in the scene and intend to win my league – there’s been some rules updates. They’re not of importance to regular players, but they do restructure how things will work this year, especially towards the end of the season. Rather than straight relugation and promotion churn from the Challenger Series that feeds into the main LCS, there will be a series of best of 5s to determine who goes up and down. There’s also now an official loaning and subbing program in place, to let players freely operate in both CS and LCS up to a point.

News burst over. Go back to laning.