Among the 128-strong League of Legends champion roster Poppy stood out for all the wrong reasons. Her pick-rate was one of the lowest in the game and in the few instances when she was selected her win-rate was stultifyingly low.

New to League of Legends? Here’s the best champions for beginners.

These unsightly stats were mostly caused by her polarising toolset which typically lead to one of two outcomes: a failed laning phase followed by late-game irrelevance or early game kills which allowed her to snowball disproportionately. As most Poppy players know, the former was far more common, and even the possibility of the latter wasn’t enough to coax summoners into taking a chance on her.

‘The Iron Ambassador’ was fundamentally broken – a terrible waste when considering the strength of her concept; playing as a hammer-wielding yordle who slams champions into walls sounds terribly exciting. Luckily for yordle fans everywhere, Riot has finally given Poppy the full rework she so badly needed. Introducing Poppy Mk II, ‘The Keeper of the Hammer’.

Only one of Poppy’s abilities has emerged from the rework unchanged, the rest of her kit is entirely new and has pushed her in a different direction. This Yordle is now a tanky queen of crowd control, with a series of abilities that stun, slow, and send enemies hurtling into the sky.

A new Poppy called for a new passive, which has been lovingly given the name of her former title. Iron Ambassador allows Poppy to throw her buckler as a basic attack every few seconds. After it’s been thrown she can pick up the buckler again to gain a shield.

Poppy’s new Q is called Hammer Shock and performs a similar job to its former incarnation. Our heroic yordle smashes the ground with her hammer, dealing area damage. After a short delay the ground erupts, dealing the same amount of damage again. Unlike her previous Q, Hammer Shock doesn’t need to be targeted on a champion or minion to be cast. 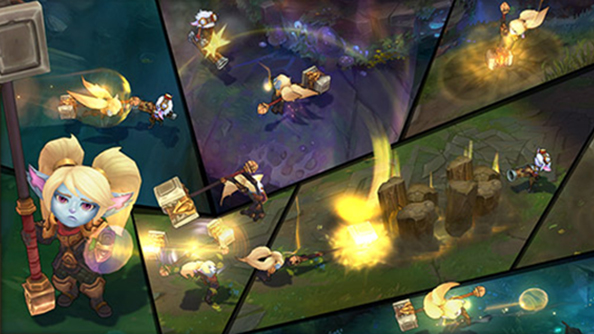 The next ability, Steadfast Presence, is Poppy’s W and is a fantastic counter for the more mobile champions Riot has introduced recently such as Ekko and Kindred. When activated Poppy gains movements speed and creates an aura around her that prevents enemy dashes. Anyenemy within the aura that attempts a dash is knocked up and takes damage. This ability also causes Poppy to passively gain armour and magic resist with each rank.

The only ability to survive the cull was Poppy’s E, Heroic Charge. When activated she slams into an enemy, driving them backward. If they collide with terrain, the opposing champion is also stunned.

Finally, we arrive at Poppy’s R, which is one of most divisive ultimates Riot has implemented of late. Keeper’s Verdict causes Poppy to charge up her hammer and deliver a massive blow, sending enemies it hits a huge distance through the air back toward their nexus. Yes, it looks as crazy as it sounds and fundamentally changes Poppy’s role in teamfights from destroyer to disruptor. 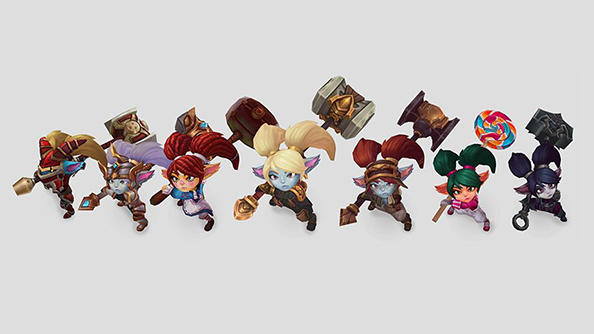 She was released way back in 2010 and Poppy’s visuals betrayed her old age. The hammer looked more like squashed maraca and the ‘pout and pigtails’ aesthetic didn’t do anything to sell Poppy’s personality. Post-rework, Poppy’s hammer has increased in size several fold. It’s now a lot, lot bigger than she is, and watching her wield the mighty lump of metal is a joy, especially as she winds up to slam people with Keeper’s Verdict.

The hammer is now also key to Poppy’s backstory. Riot has reimagined Poppy as a warrior who doesn’t know her own strength: ‘Poppy’s been tasked with delivering a legendary hammer to a hero who will become legend. Journeying through Runeterra, she uncovers a number of would-be wielders, but never suspects the hammer might have found the right person already.’ Of course, Poppy is the hammer’s true master, she just doesn’t possess enough self-belief to see it.

Poppy is no longer an assassin, and it’s important to remember this and adjust your playstyle accordingly. Her old Q allowed players to deal massive burst damage in order to focus down enemy carries, but that’s simply no longer possible – none of her new abilities feature impressive attack damage scaling. Poppy is now a utility-driven tank who relies on chained abilities and carefully timed combos to deliver sustained damage.

Be active with your passive

The range gained from Iron Ambassador is vital for harassing your opponent in lane. Sometimes you’ll need to expend it in order to last-hit a distant minion, but wherever you can, throw your buckler at the enemy champion; the extra magic damage will help you bring down enemies who build armour first.

After you’ve harassed by throwing the buckler, be sure to pick it up again to activate your shield. If your opponent is close by then quickly cast Hammer Shock in their direction before retreating, in all likelihood you’ll have inflicted damage whilst suffering none.

Be an objective detective

Thanks to her new ultimate, no other champion has the same steal potential. Ensure your teammates are warding Baron and Dragon and when you see the enemy team bringing either monster’s health low, send in Keeper’s Verdict to knock them back. They do the work, you reap the rewards. 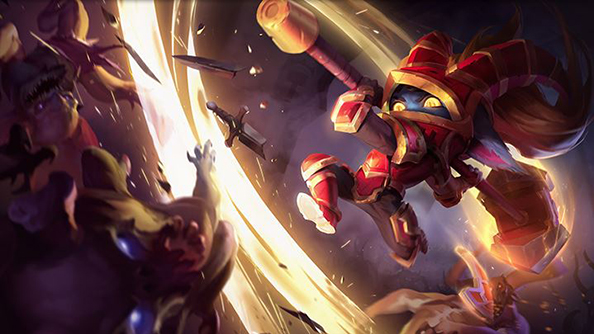 Many new Poppy players make the mistake of deploying Keeper’s Verdict at the end of a fight rather than the beginning. Due to the ability’s low damage, this has the effect of knocking low-health enemies back to safety, effectively stealing kills from your team. Instead, use your R at the earliest opportunity to split up the enemy team and focus them down one by one. Once you’ve knocked back a couple of opponents, activate your W to prevent the remnants from dashing away.

Walls are your friends

Poppy’s E, Heroic Charge, is twice as valuable when the enemy collides with terrain; not only will you do bonus damage, but the stun will likely allow you to land another Q and a couple of basic attacks. Never approach enemies from the front. Instead, gank from the sides and rear to force opponents near the edges of the lane.

It’s tempting to deploy all your abilities in quick succession to attempt a burst combo, but this is no longer Poppy’s forte. If you engage all your abilities in one go it’s probable that your enemy will escape while your cooldowns are active. Hold on to your W until the last possible moment to prevent last-second dashes.

Poppy needs to latch onto opponents in order to deliver her sustained damage, and though her toolset is designed with this in mind, it’s best to supplement her stickiness with items. Consider buying The Black Cleaver and Furor for extra movement speed, or Randiun’s Omen to temporarily slow the enemy down. 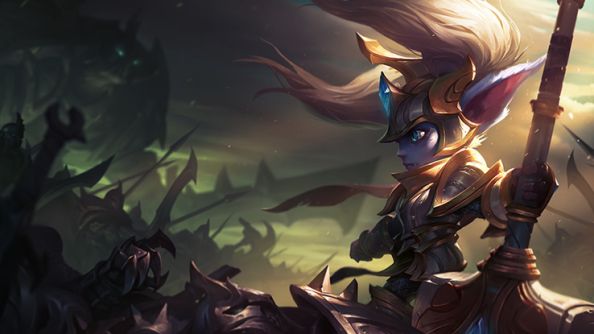 Having spent around a week in the company of the revamped Poppy I find myself torn.

The brave yordle’s kit now slots into the metagame neatly, which is a vast improvement. Poppy is now in possession of a defined role within any team: soak damage, split up the enemy, and prevent escapes.

In spite of this I find her new playstyle lacklustre. The novelty of slamming enemies backwards with Keeper’s Verdict quickly dissipates, and because the ability is extremely difficult to use efficiently, Poppy feels impotent. The stats bear out my feelings: within ranked and unranked games her win rate is stagnating at around 45%.

The rework is close to the mark, but Riot may need to make further adjustments to Little P behind the scenes before she finds a dedicated following.