One of League of Legends’ most popular supports actually started life as a fighter. In an interview with PCGN, League of Legends’ lead gameplay designer, Andrei ‘Meddler’ Van Roon said that Thresh, the Chain Warden, nearly occupied a very different spot on the Rift.

Since his release in 2013, Thresh has been a popular support in League of Legends at both the amateur and professional level, and is currently the fourth highest picked champion in that role (behind new champion Pyke, as well Morgana and Nami).

But Thresh doesn’t really fulfil the traditional support archetype. As Meddler said, “an awful lot of our traditional supports in terms of player expectation are protective, or healing, or at least classic mage types.” Several supports, such as Lulu and Braum, have whimsical, protective personas. But Meddler says support players wanted something different, stating that Riot have “seen quite a lot of player desire and resonance for some of the supports that break those expectations.”

Thresh is exactly that – a restless, vengeful spirit from League of Legends’ mysterious Shadow Isles. But even with a desire for a darker, more aggressive support, Meddler says that Thresh’s development nearly took him in a very different direction: “Thresh started off with a piece of art that one of our artists drew that everyone thought was really cool […] and everyone thought ‘of course, he’s gonna be a fighter’, because he’s got these weapons, he’s gonna be a badass.” 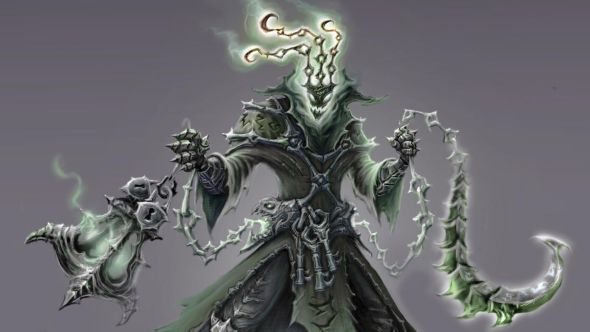 At some point, however, direction changed drastically, as “at some point somebody walking past the desk, not even involved with the project, just went ‘oh, that’d be really cool as a support, because we don’t have anything like that’. The latent player desire for a dark, aggressive support encouraged Riot to pursue the new direction, and Thresh gradually evolved into his current state.

That same desire also partially influenced Pyke, another “darker, more menacing support.” The Bloodharbor Ripper is an uncommon hybrid of a support and an assassin, a concept that Meddler says stemmed from a desire to ensure Thresh wasn’t the only champion players had access to if they wanted to play a support with a difference.