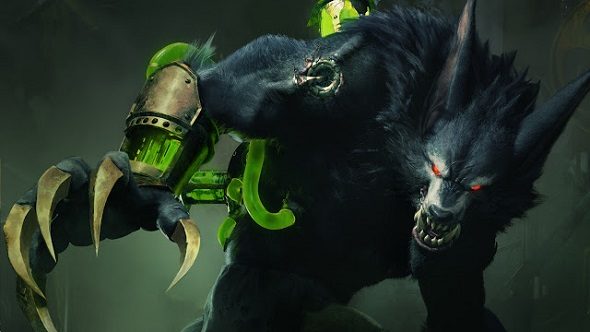 LoL’s favourite werewolf is back and he’s scarier than ever. One of the MOBA’s most enduring Champions is getting a full rework, so Riot have celebrated by teasing his new look, and some fresh moves, in a new trailer. Watch it above.

Related: check out our list of the best LoL Champions.

The footage shows the beast tearing after two Zaun criminals as they try to escape the city. They make it to a pod, but one of the duo is sacrificed to the creature as one tries to escape.

Thing is, the lone survivor is not even safe when it starts moving, as the werewolf has some good legs on it and pounces across the chasm, tearing its mechanical hand through the metal chassis.

The upcoming Champion refresh will give Warwick a full visual redesign, with luminous canisters on his back and metal armour on his arm, leading to a spiked glove.

If you look carefully, you can see some abilities in action, too. Like his sniff ability, which now seemingly buffs him up when he smells blood, growing in size as chemicals pump through his body.

The new Warwick rework should hit the PBE sometime this week, possibly tomorrow or Wednesday.