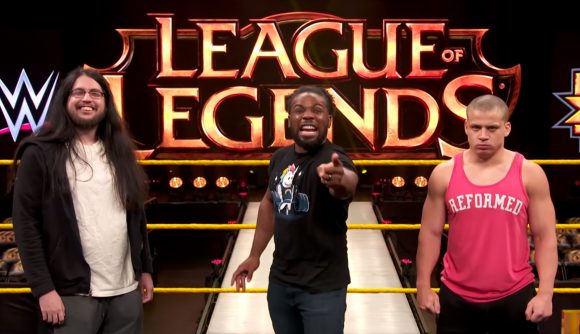 If you haven’t watched WWE in the last few years, you should know that most wrestlers are nerds now. The new collaboration between League of Legends and WWE isn’t as weird as it might once have been, but it’s still pretty weird. Especially as Tyler1 and Imaqtpie have each started coaching a team of wrestlers with a final showdown between them to happen this Saturday.

Imaqtpie heads up Team WWE, which includes Cesaro as Sion, Tyler Breeze as Ezreal, Ruby Riot as Vi, and Seth Rollins as Teemo. Tyler1 is coaching Team NXT, which has Adam Cole as Draven, Dakota Kai as Miss Fortune, Shayna Baszler as Illaoi, and Johnny Gargano as Poppy.

If you’re out of the wrestling game, the WWE folks are those on TV every week, while NXT is the developmental brand where the up-and-coming stars come through. (The fact that NXT remains a more consistently entertaining show than televised WWE is another issue entirely.)

This is all predominately being hosted by WWE’s Xavier Woods, who – alongside his wrestling career – hosts the gaming YouTube channel Up Up Down Down. League of Legends is currently sponsoring WWE, and that deal has trickled down to give us a high profile clash between eight wrestlers alongside Tyler1 and Imaqtpie.

Promos for the match have been happening for most of the past month, and perhaps the most notable is an in-ring face-off between the wrestlers and their League coaches in front of the NXT audience. The wrestlers do the bulk of the heavy lifting on the mic, but as you might expect Tyler finds himself well-suited to world of staged fighting.

“You guys are funny,” Tyler says. “You’ve got a lot of jokes. I’ve got one for you guys. Imaqtpie, you are a washed up – and I use that term lightly because that means that you were ever good – you are trash!” The respective wrestling teams, naturally, hold back the streamers from a physical altercation, while the crowd gets into the spirit with a hearty “let them fight” chant.

If you want to see more of this delightful nonsense, you can find a playlist of all the prep and promos on the Up Up Down Down YouTube channel. The final bout is set to take place this Saturday ahead of NXT Takeover Wargames, so we’ll see who reigns supreme then.