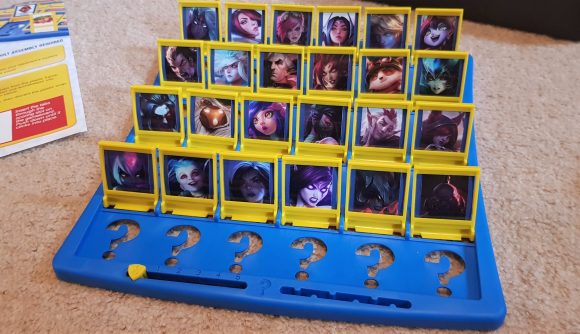 The League of Legends subreddit has enjoyed a rare moment of wholesomeness, as a user shared a very cool custom-made Guess Who? board.

The Redditor, who goes by the username u/Fetypete, had made the variation on the popular board game for their husband as a Christmas present and featured the images of all the couple’s favourite champions.

While the user is not selling the game (which would be in clear breach of copyright law), you can make your own relatively easily using the methods laid out in the thread. Photoshop will be required to cut out and resize the portraits, which can then be printed on glossy photo paper and glued onto card. Then you can simply slip your custom cards into your existing guess who game pieces.

This adorable little arts and crafts project got us thinking about which other PC game franchises should get the Guess Who? treatment.

Read more: League of Legends is without a doubt, one of the best MOBAs of all time.

With its diverse and distinctive roster of heroes, Overwatch would be the obvious contender, but we could see an even bigger audience flocking to a Warcraft variation on the classic family game. How about a Valve extended universe version, bringing in Half-Life, Portal and Left 4 Dead? Or a ‘Best Of PC Gaming’ version for that matter?