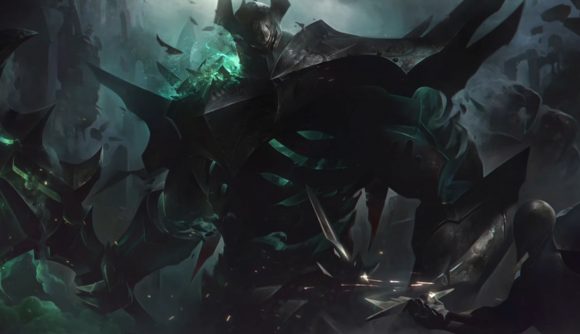 League of Legends’ Mordekaiser rework has been on the cards for a while now. While lead champion producer Ryan ‘Reav3’ Mireles announced that the Master of Metal would be getting a new look earlier this year, he’s needed a change for significantly longer than that. Thankfully, we now have a better idea of what form that will take.

In a post earlier today, the developer gave us our first look at the champion’s new abilities. While significant chunks of his kit are pretty standard, they’re undergoing some major changes – neither his W nor his E will remain the same after the update.

The most notable change, however, is to his ultimate ability. While Mordekaiser has in the past been able to conjure ghostly version of the champions (or dragons) that he helps to kill, that’s set to change. Mordekaiser’s new ultimate, Realm of Death, is the cocky solo-laner’s dream, letting him take on a champion of his choosing in a one-on-one battle to the death.

Without further ado, let’s take a look at those new abilities:

To be honest, I’m pretty much ok with almost all of that. The Q and W in particular are pretty similar, but Death’s Grasp should help offer some much-needed crowd-control.

What really gets me though, is that ultimate. Realm of Death seems to borrow pretty heavily from the Yu-Gi-Oh anime series’ Shadow Realm, but I’ll gloss over that in favour of the seven-second 1 v 1 that Mordekaiser challenges his enemies to. Quite how that’ll play out is anybody’s guess, but I’m pretty certain it’ll be fun to see in action. You can check it all out in the champion spotlight above.

Read more: Check out the League of Legends patch 9.11 notes

As for when you’ll be taking your own trip to the Death Realm, I’m uncertain, but it’s very possible that we get our first look in the lead up to patch 9.12, so keep your eyes on the PBE next week.