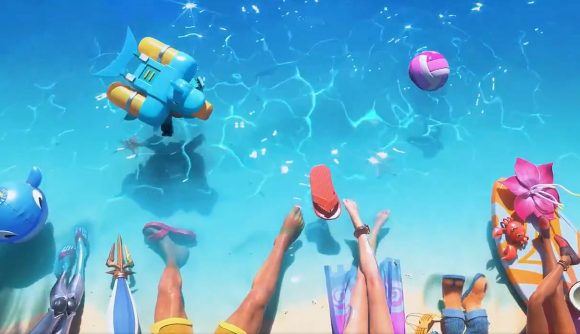 Earlier this year Riot Games shared previews of skins on the way for some “underserved” League of League Champions. These included an Astronaut skin for Bard, Pulsefire Pantheon, and a Pool Party look for Taliyah. Now, the dev’s posted a new tease (via Dot Esports) in the form a clip showing a bunch of Champs chilling out on the beach, dipping their legs into the bright blue sea – but it’s just their legs we can see. So, it looks like we’ll have to try and guess who might be in for some Pool Party skins this year.

First up, there’s clearly a pair of furry, orange, flip-flop clad feet enjoying the sunshine, which points to one of LoL’s Yordle Champs. It’s not clear exactly which one, but given Ziggs already has a Pool Party skin, that probably rules one out at least, leaving 12 others.

There’s a pair of yellow goggles perched on the sand just next to the mystery Champ which could be a clue – perhaps it’s Teemo, Corki, or even Heimerdinger in for the skin, as they each wear goggles with their regular skins. Hmm.

In addition, there’s a Champ with muscular legs and a trident-like accessory, which could point to a couple of different possible characters: Xin Zhao or Jarvan IV. Given a trident-like spear appears with more of the former’s previous skins than the latter’s, it seems more likely it’s the Seneschal of Demacia – though this is just guesswork at this point.

Who's ready for some sand, sun, and surf?🌞🌊 pic.twitter.com/IpfliLzXIA

As for the robot-legged Champ enjoying the seaside, it looks pretty clear that it’s going to be Orianna – but who the legs right in the middle of the shot bearing a tattoo belong to is less clear. It’s possible it’s Jinx, given she’s usually depicted with tattoos, but it’s also feasible it’s Karma or even another Champ that usually hides away some ink on their leg.

It’s worth noting the above is just speculation at the moment as, other than Taliyah, Riot hasn’t yet announced some incoming Pool Party skins. However, given the new tease, it’s likely we’ll hear something very soon.

In the meantime, take a look at the LoL patch 10.12 notes ahead of the next update’s arrival in-game tomorrow so see what’s in store imminently.