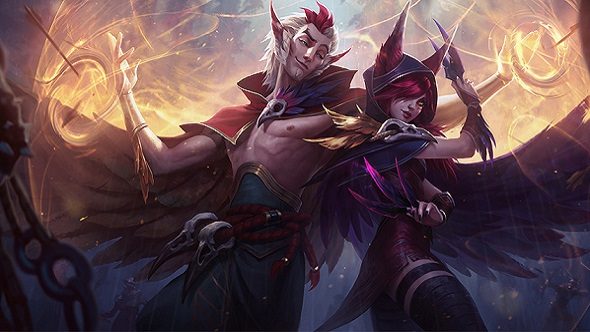 Riot have just released two new Champions into LoL’s PBE. The two new faces are Rakan and Xayah, a pair of lovers who are also fighters, each with their own distinct style: Xayah is an assassin who excels at creating traps, while Rakan is a support Champion who dances with death.

For the lowdown on League of Legends 7.7, click that link.

The two new Champions are playable in the PBE now. Being lovers, some of their skills overlap in interesting ways. It’ll definitely pay for players to pair up and let loose.

Here’s exactly what they can do:

Rakan throws an enchanted feather. If it strikes an enemy Champion or epic monster, his cloak surges with energy. This energy can be used to heal allies by touch.

Players can use this to close distance, leaping forward and then soaring into the air before crashing down and injuring your enemies.

Jump to the aid of your allies and shield them from harm. You can use it again immediately after its first use, for a few seconds. Rakan can leap an increased distance if Xayah is the target.

Rakan charms and damages enemies as he sprints through them, but only once per Champion. The first Champ he touches grants Rakan a speed boost.

If Xayah or Rakan recalls, the pair can choreograph a perfect return to base.

After casting an ability, Xayah’s next few attacks penetrate enemies, passing through them and onto the next, though damage decreases for each consecutive target. Feathers are also left where strikes land.

Xayah throws two blades in a straight line. A feather is left where they hit.

Xayah summons a storm of feather blades that increase strength and speed of her basic attacks. The first enemy hit also increases her movement speed. If Rakan is nearby, he also gets buffed by the ability.

Xayah recalls all feathers she’s dropped, causing damage to anyone in their path. Enemies struck by several feathers will be briefly rooted to the spot.

Xayah leaps into the air and becomes untargetable. From here she can move and fire a volley of blades downwards in a cone. She leaves a feather where she lands.

Again, if Xayah or Rakan recalls, the pair can choreograph a perfect return to base.