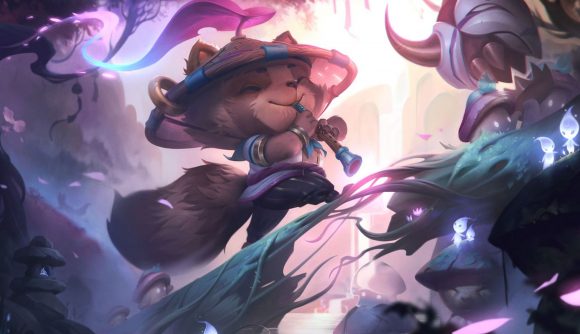 After various teases and skin reveals, Riot has fully revealed the Spirit Blossom event. The month-long thematic experience spans across League of Legends, Legends of Runeterra, and Teamfight Tactics, and is live from now until August 24. Expect to see Nexus Blitz return to LoL alongside a new narrative mode called Spirit Bonds, skins, and fresh personalisation items for Legends of Runeterra and Teamfight Tactics.

Spirit Bonds is exclusive to League of Legends and sees players forge deeper relationships with champions from the Spirit Blossom skin line. You’ll go on various narrative-style quests to earn their favour and snag exclusive rewards by completing missions. Riot has specifically cited anime and visual novels as an inspiration for the mode. The LoL champions to get skins are Lillia, Thresh, Ahri, Teemo, Yasuo, Vayne, Riven, Cassiopeia, and Kindred. There’s also a new champ’ called Lillia.

As for Legends of Runeterra, you’ll be getting a new lab called Bestow. You choose one of six preconstructed Spirit Blossom decks, start each game with 30 health, and when a unit dies its confers its stats to a random unit in hand. There are also new epic quests and an event pass with premium cosmetic items alongside a new Kitt Guardian.

Fans of Teamfight Tactics can expect new Little Legends variants for Featherknight, Hushtail, and Melisma designed to the Spirit Blossom theme. There’s also a new pricing model that allows you to purchase one-star versions of each of them directly.

If you’re looking for some more reading before you jump in, then you can check out the League of Legends patch 10.16 notes in full here. If you want to find out what the deal is with League of Legends potential next champion Yone, then we got that for you, too.